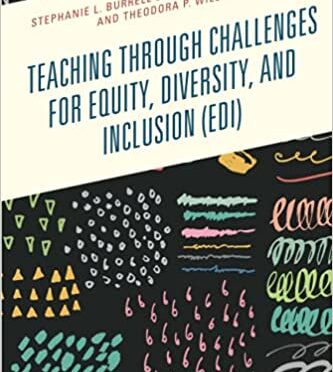 This is the fourth entry in our dialogic pedagogy summer reading series. For more on the series and a full list of texts, see here.

Title: Teaching through Challenges for Equity, Diversity, and Inclusion (EDI) (published in 2020; $25; available for purchase HERE)

Context of Creation: This edited volume arises out of conversations begun at a Faculty Resource Network seminar on equity, diversity, and inclusion (EDI) at NYU in 2016. The three authors take a practical, strategy-based approach that openly addresses various challenges for EDI in the classroom, rather than offer idealistic visions that might otherwise feel impossible to attain. Burrell Storm is an associate dean and associate professor of multicultural education at Fairfield University and the Region 1 Director for the National Association of Multicultural Education. Donovan is professor of philosophy at Wagner College and faculty coordinator of the First Year Program. Williams is associate professor emerita of human resource management at Marygrove College. The book has a companion text, Breaking Down Silos for Equity, Diversity, and Inclusion: Teaching and Collaboration across Disciplines (2020), also by Burrell Storms, Donovan, and Williams.

Context of Reception: I read the book over the course of a day in my house in Austin, in spurts during and between regular life, and I found it affirming, encouraging, and thought-provoking!

Overview of Structure and Content: Following a preface and introduction by the three authors, the book is organized into six parts according to theme: Respect for Divergent Learning Styles, Inclusion and Exclusion, Technology and Social Action, Affective Considerations, Reflection for Critical Consciousness, and Safe Spaces and Resistance. Each part contains 2-3 chapters written by 20 interdisciplinary contributors, including an early elementary librarian, a business professional, and practicing family therapists in addition to academics from departments of education, philosophy, English, nursing, and psychology.

A number of the contributors to this volume mentioned pulling in literary texts–whether poetry, personal narrative, memoir, diary, and other forms of life-writing; short stories; or excerpts from novels–as well as other primary sources, such as oral histories, land treaties, political manifestos, and blogs, as a way to counterbalance instructional materials and discourses in any discipline that are exclusionary of marginalized voices (at best) or perpetuate stereotypes and other harmful constructions of non-dominant peoples (at worst).

For example, Hyun Uk Kim, in “Placing (dis)Ability Front and Center in EDI Studies,” writes, “In an introductory special education course, one strategy to challenge the [dominant] deficit model [of disability] is for students to read a book written by a person with a disability label” (8). In “Teaching Indigenous Sovereignty in Multicultural America,” Danica Sterud Miller provides a lesson plan for teaching the 1969 Proclamation of Alcatraz, authored by the Indians of All Tribes, in a wide variety of possible courses (29-32). In “Disturbing Voices: Literacy in the Archive and the Community,” Betsy Bowen describes how in an English class on language and literacy (not literature), she had students read a range of poems and personal narratives dealing with linguistic marginalization (for example, Gloria Anzaldúa’s “How to Tame a Wild Tongue”) as well as explore oral histories collected from formerly enslaved people in the early twentieth century (56-57).

Collectively these educators suggest that, when so much classroom instructional material represents a privileged, dominant viewpoint (middle class, White, male, Christian, Western, cisgender, heterosexual, non-disabled), primary texts related to the course content in some way and written by members of non-dominant groups become not just an engaging supplement to “core” or “main” instructional texts but a crucial component.

The two chapters in Part II deal with the tensions between inclusion and exclusion. In “Teaching Indigenous Sovereignty in Multicultural America,” Danica Sterud Miller makes the point that multiculturalist discourse, with its emphasis on a democratic ideal of equality and belonging, often performs Indigenous erasure by failing to honor American Indians’ long struggle for sovereignty; that is, tribal separateness from the nation. “Inclusivity,” she writes, “includes peoples, especially Indigenous peoples, who may or may not want to be included” (33).

Meanwhile, in “The Paradox of Inclusion and Exclusion,” Samira Garcia, Tabitha McCoy, and Hoa Nguyen write, “Educators must distinguish between including a person (as a sentient being) while simultaneously excluding oppressive dialogue. . . . It is important for both educators and classmates to realize that worldviews can evolve, given sufficient space for reflection. This means that as each participating person in the classroom brings forth their ideas and notions, those listening should remain genuinely curious about how these make sense given the speaker’s context. The absence of curiosity leads to opposition and defensiveness. It also leads to the totalizing of identities based on specific utterances” (42).

The final chapter of the book, “Curricular ‘Safe Spaces’: Clarifying Potential Misconceptions,” deals with the contingency and contextuality of the classroom as “safe space.” There are myriad different understandings of what “safe” means (i.e. does “safety” in a classroom setting mean freedom from tension, discomfort, or being challenged, or does it mean swift denunciation of hate speech and fair warning regarding materials likely to trigger students who have experienced trauma?). These different understandings tend to privilege the “safety” of different groups. Adamo historicizes the campus or extracurricular “safe space,” explicating its roots in zones designated as “safe” for LGBTQ+ students by administrators, instructors, and fellow students — which, they point out, are not universally “safe” spaces but rather aimed at providing safety to a specific population of students.

In contrast, Adamo argues, the curricular or classroom safe space “must be maximally safe for everyone — all identities and all viewpoints” (124). It “does not limit what can be said but rather encourages reflection and empathy with regards to how something is said” — including helping students self-reflect and learn to recognize the difference between safety and comfort, between speech that is harmful and silencing versus speech that is challenging. “Most importantly,” Adamo writes, “instructors declaring their classroom a ‘safe space’ does not necessarily make it so. Each student is the judge as to whether their classroom space is ‘safe’ for them to express their personal experiences and perspectives” (122).

In “Transforming Fear into Courage: EDI and Compassion-Based Learning,” Jacqueline Wong and Carla Hilario argue that “it is impossible to create an absolutely ‘safe’ space for co-learners.” They suggest instead the “co-construct[ion of] a ‘relational space’ that acknowledges the lived experiences of all co-learners and also the structural contexts of these lived experiences.” They advocate for three basic strategies to create a relational space:

The importance of self-reflection, critical consciousness, and a sense of connectedness to others in the classroom space is stressed over and over by different contributors throughout Teaching Through Challenges to EDI. Mindfulness practice is suggested multiple times as a means by which all three of these concepts can be supported. In “Know Thyself: Implicit Bias and Mindfulness,” Paula Gill Lopez defines “mindfulness” as “bringing nonjudgmental focused attention to whatever is being experience in the present moment” and suggests that mindfulness practices help to reduce the unconscious habits of privilege, including biases, prejudices, and response patterns, by defusing the brain’s conditioned response of fear or distrust of the other and helping to establish new neural pathways of “self-awareness, self-regulation, and compassion” (76).

This would suggest, too, that mindfulness can help counteract shame for both instructors and students, which works as a “silent enforcer” of privilege and oppression by causing people in privileged positions to shut down or become angry and defensive, preventing them from dealing meaningfully with their biases. Meanwhile, people in less privileged positions frequently experience internalized oppression as shame, as Kyle Forrest and Peter Thompson explain in their chapter (67).

Gill Lopez suggests three possible mindfulness practices that instructors can use in class (as well as on their own, in preparation for a class dialogue or student or colleague interaction they anticipate will be tough):

Don’t Let the Fascists Speak: A Dialogue on Speech, Silence, and Safety

This is a lesson plan for a classroom dialogue using Pat Parker’s poem, “Don’t Let the Fascists Speak,” which appears as the first poem in Nepantla: An Anthology for Queer Poets of Color (ed. Christopher Soto, 2018). This could be used at the beginning of the semester to initiate conversations around guiding principles and purposes of dialogue in the course. It could also be used as a follow-up activity after a particularly tense dialogue at any point in the semester. It weaves together several of the core ideas from Teaching Through Challenges to EDI:

We will be reading Teaching to Transgress by bell hooks (1994).

One thought on “Summer Reading Series: Teaching Through Challenges to Equity, Diversity, and Inclusion”