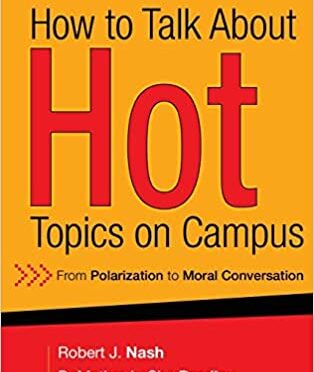 This is the eighth entry in our dialogic pedagogy summer reading series. For more on the series and a full list of texts, see here.

Title:  How to Talk About Hot Topics on Campus: From Polarization to Moral Conversation (published 2008; $45; available for purchase HERE).

Context of Creation: The three authors, who represent a classroom professor, a student affairs administrator, and a senior administrator, are responding both to the Ford Foundation’s Difficult Dialogues: Promoting Pluralism and Academic Freedom on Campus call for proposals and the Wingspread Declaration on Religion and Public Life: Engaging Higher Education. They are also writing during the first decade after September 11, 2001 and reference the particular urgency around religious literacy, in particular, relevant to that moment. Overall, while they suggest that moral conversation is a useful framework for all manner of difficult dialogues, they focus on religion, social class, and politics as “underrepresented” topics in campus and classroom conversation (20). The authors reference intergroup (i.e. intercultural) and interfaith dialogue projects as related but different pursuits to moral conversation, whose basic purpose is “aimed at the tireless support of the other person’s flourishing” (9) through a dialogue based around mutual sharing of personal stories, affirmative forms of critique and challenge, and a willingness to doubt the self and suspend judgment for the other. Nash has been a professor in the University of Vermont’s College of Education and Social Services for nearly 50 years. Bradley is currently Acting Vice President for Student Affairs and Dean of Students at Macalester College; at the time of writing, she was an assistant director for student integrity at UVM and pursuing her doctorate in education at UVM. The late Arthur W. Chickering was Special Assistant to the President of Goddard College at the time of writing.

Context of Reception: I started reading How to Talk About Hot Topics while drinking a Bloody Mary on a deck overlooking the Medina River at a beautiful house at which friends invited us to come stay a night with them, one week before my family was scheduled to move across the country. I believe these combined factors contributed to my sense of bemusement, which in another mood might have been impatience, as I read the initial two chapters, which are devoted to the theory of moral conversation and its potential to foster pluralism. I read sentences like “Moral conversation begins with an assumption that there is nothing inherently erroneous or immoral about any initial presumption of truth” (8) and “Success is measured by how well each of us is able to make the other person look good” (21) with an incredulous smile. I deeply wanted some illustrative pedagogical anecdotes or further qualification to dam up the instant waterfall of “but what about”s that flowed over me, but it was up to me to imagine, with generosity and patience, how these statements could mean something something other than “Indulge, patronize, and flatter participants at any cost.” It seems, though, that the imaginative labor of suspended judgment is part of the point of moral conversation, and as such I gave it my best effort. I found the book to be full of pat aphorisms like “Engage, don’t enrage,” “Be curious, not furious,” and “Turn down the volume and turn up the sensitivity” (52-53) but lacking (save an appendix at the very end) a clear set of guidelines regarding what, precisely, a moral conversation (or what “engaging, not enraging,” etc) might look like and how one might teach or facilitate it. As I moved into the Part II chapters on practice, I found more substance to sink my teeth into. Ultimately, however, despite the book’s “how-to” title, I find it a more effective defense of the necessity of moral conversations, particularly around religion and social class, than a manual.

Overview of Structure and Content: How to Talk About Hot Topics on Campus is divided into three parts. Part I, which presents a single authorial voice attributed to all three authors, is comprised of two chapters that explicate the meaning and value of moral conversation, the meaning and value of pluralism, and the relationship between the two. The three chapters of Part III are each written by one of the three authors and focus on one of three major topics that the authors argue are underrepresented in dialogue on college campuses (in comparison to race, gender, and sexuality). They also each focus on a different dialogic arena on campus. Thus Nash’s chapter focuses on moral conversation around religious difference in the classroom, Bradley’s chapter focuses on moral conversation around social class identity in co-curricular spaces under the purview of student affairs, and Chickering’s chapters focuses on moral conversation around political beliefs on the level of upper administration. Part III presents “final words” in the form of opportunities, risks, and caveats for moral conversation and is followed by a series of appendices, including, most usefully, “A Step-by-Step Guide for Facilitators and Participants When Doing Moral Conversation.”

Three Thought-Starters for Teachers, with Resources:

“Educators must remain committed to the paradoxical principle that the very best way to help all parties on college campuses deal intelligently with dissent and compromise is to expose conversationalists to as much intense, divergent belief as possible. This includes those intolerant belief systems that, on principle, forbid compromise and dissent” (45).

“Every [steadfast, unwavering conviction] actually conceals a profound truth for the believer. A commitment to intellectual pluralism demands that we make an all-out effort to identify this potential profound truth before we launch into a critique of its downsides, no matter how valid and necessary this critique might be” (48).

I have updated the “Models of Dialogue” graphic that I initially created upon reading Creating Space for Democracy to include a snapshot overview of the defining elements, goals, and origins of moral conversation as a framework for dialogic pedagogy, including the facilitator’s role and sample materials that illustrate the approach. It is now titled “8 Models of Dialogue” — access a PDF version HERE or a digital version HERE.

I have also reproduced Appendix A, “A Step-by-Step How-To Guide for Facilitators and Participants When Doing Moral Conversation,” from How to Talk About Hot Topics on Campus, HERE. (It is also linked as the sample material within the “8 Models of Dialogue” graphic, above.)

“No longer [can] we, as professors and campus leaders, afford merely to intellectualize religious and spiritual differences in a bemused, dismissive, or detached manner; or to adopt a folkloric approach with students wherein we do some superficial ceremonial ‘sharing’; or to mention this content in passing, if we bother to do so at all. . . . We no longer have the luxury of thinking about religion as merely a private affair. . . . We must learn to deal with the phenomenon of religious pluralism with openness, respect, and critical understanding, or all our unexamined religious stereotypes could very well kill us. . . . Religious illiteracy in today’s global community is simply unacceptable” (Nash, 72).

On the basis of two decades of teaching a dialogue-driven course on religious pluralism to students of education, Nash explicates a typology of the “8 Kinds of Believers Likely to Appear in the College Classroom” — which I have summarized in this graphic (access a PDF HERE, or a digital version HERE).

Nash writes, “I hold that we are more likely to get college students from a variety of religious backgrounds to open up publicly about their guiding beliefs when we are able to de-emphasize the revelational, doctrinal, and corporate-institutional elements of religion in favor of the aesthetic and the poetic, the philosophical and the literary. I make the case to my students that the best way to approach conversations about religious beliefs is to understand them as compelling and useful narratives that people have constructed for thousands of years in order to explain life’s tragic anomalies as well as its gratuitous gifts of grace” (82).

In accordance with the narrativistic, story-driven ethos of moral conversation, an instructor might share the “8 Kinds of Believers” typology with students and ask them first to reflect and write some initial thoughts regarding where among these categories they might locate themselves as believers. Then, the instructor might invite students to share stories of how they came to be this kind of believer (or a hybrid kind, or another kind unrepresented in Nash’s typology). Some useful questions for this exercise, both during the reflection and writing portion as well as the dialogue portion, might be as follows, drawn from an earlier chapter by all three authors (p. 60):

“When, I ask, was the last time you openly confronted an issue that touched on social class? When was the last time you heard a classist comment? How did you react, if you reacted at all? If you have never heard these discriminatory comments or have never openly addressed an issue around social class with students, why do you think you have somehow escaped the omnipresent curse of classism? I ask these questions because for all of us to benefit from moral conversations about social class identity, prejudice, and privilege, we have to start with an awareness of where each of us stands on the issue of social class. There are days in my work where I wonder if we really know anything at all about this subject matter. Or worse, whether we really care” (Bradley, 105).

“Social class identities do not get addressed as deeply, or as openly, as other identities. Why is this? Have the negative connotations surround social class in the United States–where nobody is supposed to be any better than anyone else, regardless of their money, position, or education–contributed to its notoriety as a taboo topic? It is my opinion that as we look to make identity development a priority with our students, social class must become one of the primary identities that need further, deliberate exploration. This is going to be difficult” (Bradley, 111).

Bradley, following Nash, produces her own typology related to social class identity — and similar to the way in which Nash does not list out belief systems but rather characterizes different orientations to belief systems, Bradley does not list out class categories but rather enumerates “5 Common Attitudes towards Social Class Identity” that she has observed among college students. I have summarized these attitudes in a graphic (access a PDF HERE or a digital version HERE).

Again, rather than attempting to categorize your students according to this typology, I suggest sharing this graphic with students and inviting reflection, writing, and storytelling around where they locate themselves among these attitudes. I believe that expanding the conversation from “What is your social class identity?” to “How do you navigate your social class identity? How do you feel about the way you navigate it? What are your anxieties related to class here at college and back home?” and similar questions is vastly more meaningful. This is not least because class categories such as “working-class,” “middle class,” “wealthy class” (much less “working poor,” “upper/lower middle class,” “blue-collar,” etc) and so on are nebulous, vague distinctions, and it can be very difficult, especially for students new to the conversation or new to a more heterogeneous class environment, to know where to locate oneself, or how to make meaning from such a label.

Next Week . . . We will be reading Introduction to Intergroup Dialogues, edited by Stephanie Hicks (2021). Note that this is a change from the originally scheduled reading, which was to be Facilitating Intergroup Dialogues: Bridging Differences, Catalyzing Change (Maxwell, Nagda, and Thompson, 2011). While it comes out of the same Intergroup Relations initiative, this new text is a textbook for student facilitators and participants in intergroup dialogue rather than a faculty facilitators’ manual.