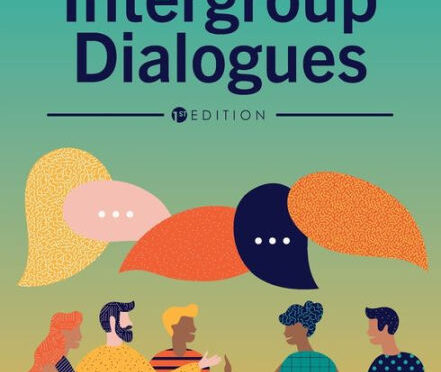 This is the ninth entry in our dialogic pedagogy summer reading series. For more on the series and a full list of texts, see here.

Context of Creation: This is a brand-new textbook designed for use in courses built around the concept of intergroup dialogue–“a form of social justice education that seeks to engage difference, social identity, and social justice” (2). It is a publication out of the Program on Intergroup Relations at the University of Michigan, one of the most longstanding and best-known dialogue-based programs in higher education. It follows other volumes such as Intergroup Dialogue: Engaging Difference, Social Identities and Social Justice (eds. Zúñiga, Lopez, and Ford, 2014) and Facilitating Intergroup Dialogues (Maxwell, Nagda, and Thompson, 2011). Stephanie Hicks is a lecturer in the IGR program at Michigan.

Context of Reception: I read half of this book on a picnic blanket in a park and the other half nestled in a window seat, both during the first week of living in my new home city of Philadelphia. The familiar concepts of the book came to me within a context of newness (the unfamiliar, exciting environment of a beautiful old city park), chaos (the unpacked boxes and disassembled furniture surrounding my window seat refuge in the new apartment), and difference (every time my eye wandered up, I saw something that contrasted in an immediate visual way with Austin, from the tall trees and Victorian-era rowhouses to the ethnic diversity of the people in my neighborhood).

Overview of Structure and Content: The four units of the reader are based on the four stages of the intergroup dialogue model: 1) relationship-building, 2) social identity exploration, 3) hot topics, and 4) action planning. The units are not evenly balanced in terms of number of chapters or readings per unit: Unit 1 contains two chapters and one reading, while Unit 2 contains six chapters and 12 total readings. Unit 3 is a single, short chapter with no secondary source reading, while Unit 4 is comprised of two chapters and seven readings. Thus, although the introduction presents the textbook as a resource “created with student participants and facilitators in mind,” it is not primarily a skillbuilding handbook (there are really only two chapters that directly address the skills of participating in/facilitating dialogue — Chapter 2, “Affirming Inquiry,” and Chapter 9, “Exploring Conflict on Campus, in Communities, and Beyond,” both of which are very short at 2-3 pages). Rather, it is a collection of short readings, accompanied by pre-and post-reading reflective discussion questions and key term definitions, intended to introduce students to basic concepts related to social identity, oppression, and privilege. A number of these texts are drawn from Readings for Diversity and Social Justice (4th ed. 2018), such as the “-ism: An Introduction” texts and Bobbie Harro’s “Cycle of Socialization/Cycle of Liberation” graphics. Many of these texts are linked in our Difficult Dialogues resources at UT-Austin. Others come from people affiliated with IGR at UMich and/or are identified by the editor as “classic” social justice education texts (xiii), including particularly useful texts by (among others) Beverly Daniel Tatum, Gwyn Kirk and Margo Okazawa-Rey, Derald Wing Sue, Iris Marion Young, Devon W. Carbado, and Eesha Pandit.

One In-Depth Activity: How I Got Here: A Testimonial

This activity borrows the notion of the testimonial and refers to Dori Laub’s seminal work on the topic of testimony and the need for an “addressable other” to stress the relational nature of testimony. Rather than introduce the testimonial as part of the “exploring social identities” stage of the intergroup dialogue process, however, as Introduction to Intergroup Dialogues does, I have designed this activity to be done in the first stage of relationship-building and dialogue skills development. Rather than speak to their experiences related to a particular social identity, students are asked to craft a narrative of “how they got here,” for the principal purpose of affirming everyone’s unique pathway to the university and right to belong, as well as practicing the critical dialogic skill of deep listening. The prompt itself takes inspiration from the Blanton Museum’s digital video resource “Belonging,” which could be included in this testimony activity. In leaving “how I got here” fairly open to interpretation as a prompt, I also intend the activity as a kind of assessment to gauge how students are (and aren’t) already thinking about (their) privilege, regardless of which identity positions they occupy. It strikes me that a great deal of the friction I am feeling with privilege discourse in these readings has to do with the way it is so (necessarily) generalized; this activity allows instructors (and participants!) to become aware of and responsive to the actual people in the room, where they come from, and how they are thinking and feeling. It also grounds an ongoing discussion of privilege and oppression related to various social identities in the one privilege everyone in the room is almost guaranteed to share, which is the privilege of a college education at (in UT’s case) a top-ranked, selective institution. Awareness of the privilege of being college students, spending part of their days in high-minded dialogues for the purpose of their own economic, social, intellectual, or moral betterment, is, in my mind, a good starting point from which to begin to empower students as critical agents.

The dialogue that follows the testimonial sharing should ask questions that prompt critical self-reflection such as:

Next Week . . . We will be reading Democratic Dialogue in Education: Troubling Speech, Disturbing Silence (by Megan Boler, 2004).