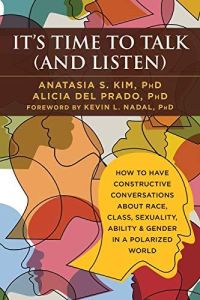 This is the eleventh entry in our dialogic pedagogy summer reading series. For more on the series and a full list of texts, see here.

Title: It’s Time to Talk (and Listen): How to Have Constructive Conversations About Race, Class, Sexuality, Ability & Gender in a Polarized World (published 2019; $25; available for purchase HERE)

Context of Creation: The authors are both practicing therapists as well as associate professors at the Wright Institute, a graduate school of psychology in Berkeley, California. This mass-market book draws on cognitive behavioral therapy, multicultural and Buddhist psychology, and the authors’ personal experiences with racial, economic, and gender-based marginalization to present an eight-step process called “Kim’s Constructive Conversations Model.” The book’s stated purpose is to support readers in engaging in “effective, candid, and compassionate conversations with family, friends, colleagues, and even strangers about any controversial topic” (xii). The authors stress internal growth, healing, and intimacy as the goals of dialogue. Published in 2019, the book makes reference to the 2016 election and topics such as trans and reproductive rights, Islamophobia and anti-immigrant sentiment, Black Lives Matter, and ableism.

Context of Reception: I came across this text as part of a search and selected it for the ways in which it is different from many of the other dialogic pedagogy texts I was finding: a commercial rather than academic book; authored by women of color; with reference to “ability” as a topic for difficult conversations; and very recently published. I read it in the same week as Democratic Dialogue in Education, and it was very different from that text in particular, for all the above reasons! I have occasionally doubled up on reading throughout this series in order to work around other commitments and scheduling obstacles, and I find that attempting to deeply engage with two different texts on dialogic pedagogy isn’t ideal. Luckily, this was a straightforward read that gave me more to think about than I expected, although I was disappointed to find that dis/ability did not actually get more than a passing mention in the book.

Overview of Structure and Content: Following an introduction, the book’s chapters each focus on a different step in the “Kim’s Constructive Conversations Model” process:

The first four steps are focused on “internal work” — self-reflection and preparation — while steps 5-8 are part of the dialogue “proper.” This book is like a number of others in this reading series in that authors Kim and Del Prado include both real-life anecdotes from their own experience (demarcated as “Anastasia’s Turn” or “Alicia’s Turn”) as well as hypothetical “difficult dialogues” scenarios. However, it is unique in that each step includes several opportunities for active journaling — breaks marked as “Your Turn” at which readers are meant to reflect and write down (or occasionally sketch) their responses to the authors’ questions. Thus, though the authors stress that the book is “not a manual,” it is a therapeutic workbook of sorts. Though the subtitle mentions the particular sensitive topics of race, class, sexuality, ability, and gender, the book does not provide targeted guidelines for each of these topics (e.g. how to talk about dis/ability) but rather draws on these topics to present example scenarios.

Find a snapshot overview of this model in comparison with others in the updated graphic 9 Models for Dialogue (digital version HERE).

A striking, and refreshing, aspect of Kim and Del Prado’s approach to dialogue is that it is grounded explicitly in the individual self rather than the sometimes forced, shallow, or inauthentic collectivism of many other dialogue models. That is, rather than starting with the need for a common goal for dialogue, rules of engagement, and agreements around acceptable language and consistent terminology — although they agree these are all important elements — Kim and Del Prado ask dialogue participants to start with extensive self-reflection. This reflective process is not only about social identity, but also about the values, personality, and anticipated barriers to effective communication of individual participants. Although this is undoubtedly due to the fact that these authors’ focus is on interpersonal, one-on-one conversations (usually in response to an incident or pre-established pattern of behavior), I am intrigued by the ways in which their approach might transfer to a group dialogue setting. I like the idea of having students think rigorously about their own, personal values — what they each, individually, believe is really important and meaningful when it comes to engaging in conversation on difficult topics — and share these values publicly with one another.

Another unusual aspect of the “constructive conversations” approach is its emphasis on personal healing as the ultimate goal for difficult dialogues. Rather than stress concrete social or political action towards social justice as dialogue’s end goal, or focus on understanding of the other, Kim and Del Prado present dialogue as a form of self-care — a way to address the wounds of being misunderstood, discriminated against, insulted, humiliated, ignored, etc. In this sense, although they claim the book “is not intended for people from any particular cultural group or political outlook” (xii), the focus of their approach as well as the examples they use throughout suggest that this is (at last) a dialogue model directed towards folks from marginalized social groups and their allies/co-conspirators. As such, this model as Kim and Del Prado present it is not a prelude to “action” but rather action in and of itself, directed inward rather than outward. Kim describes her 8-step model as arising from a period of intense and exhausting ongoing conversations around how to include multicultural studies with colleagues and students in her psychology program. “I realized that what was depleting my energy and hope was . . . pain. I was deeply hurt, my spirit wounded,” Kim writes (xvii); she drew on both her professional experience as a therapist who treats anxiety and her personal spiritual practice as a Buddhist to conclude, “I needed to turn toward, and not away from, the fear of that pain. . . . To find enlightenment and liberation, I must first look within and begin to understand the source of my pain and suffering” (xix). Kim and Del Prado stress agency (one does not participate in dialogue unless they choose to and commit to it), self-care (“taking care of yourself is more important than getting all the steps right”), and safety (acknowledging that histories of abuse, violence, and trauma with a particular person make dialogue impossible or inadvisable sometimes) (xxiii-xxiv).

A third less-common focus in Kim and Del Prado’s approach is on intimacy. While other models frequently name relationship building as a goal of dialogue, they are often quite vague about what kind of relationships dialogue is meant to build (cordial, professional relationships? A friendly but distant sense of warmth? The right to claim “friends” of different identities?). The authors’ declaration that “honest and sincere dialogue about such [difficult] issues can actually lead to great intimacy between the people involved,” on the other hand, suggests a higher degree of closeness and vulnerability (41). Kim connects healing and self-knowledge to intimacy when she writes, “Walking away and ending relationships never lessened my pain or solved the problems that created it. It did the opposite” (7-8). Thus, stressing that intimacy is not the same as agreement or resolution, Kim and Del Prado advocate for emotional intelligence and careful attention to interpersonal communication in dialogue, in order to create more closeness.

In the second step of their model, Kim and Del Prado urge people to locate the barriers they experience or anticipate when it comes to difficult conversations, acknowledge those barriers, and then take steps to address and ameliorate them. They identify fear as the most common and pernicious barrier to effective dialogue, and note that it comes in many forms and as such, must be carefully interrogated and properly attributed in order to be dealt with. The authors suggest making a list of fears related to dialogue and then preparing to face those dialogue-related fears by identifying another, unrelated fear (for example, speaking on the phone to strangers, or traveling across town without GPS). Making a plan to conquer this unrelated fear by breaking it into smaller steps and planning out specific actions, Kim and Del Prado suggest, helps to strengthen a general “fear-facing” muscle that then allows for greater ease in facing deeper fears related to dialogue.

In addition to practicing this exercise yourself and/or having students engage with it, instructors might follow it up with a role-play related to fears about the coming dialogue in class. Have students identify their anxieties and then script out a worst-case scenario. In pairs, students function as scene partners for one another to act out the feared scenarios, then support each other to imagine ways to respond and cope with these scenarios. (Instructors can also practice this themselves to process their own fears regarding facilitation ahead of the dialogue!)

Kim and Del Prado present “Why, Me, Ask” as a formula for effectively initiating a difficult confrontation. Its three basic ingredients are as follows:

An example of how this might look is as follows, adapted from one of the authors’ examples: “I always look forward to your sense of humor and your jokes in class! [Why] But when you made a disrespectful joke today about Asian people, I was really shocked and disappointed. [Me] I wanted to talk with you about why this is not acceptable, and I also wanted to hear about what was going through your mind when you said it. [Ask]”

This may be a useful framework to refer to when confronting students, colleagues, and others.

The Known Self: Values Awareness and Alignment with the Johari Window

“Values are the heart of the Kim Constructive Conversations Model,” the authors write (47). As such, and given their emphasis on self-knowledge, this activity uses the Johari Window, which Kim and Del Prado reference in the book, to guide students through self-reflection related to their values related to dialogue, their behavior patterns in dialogue, and the alignment between the two. I envision using this exercise early in the semester, as a complement or precursor to a discussion on group agreements for dialogue.

I also envision returning to core values regularly as a framework for self-assessment of dialogue participation that is more personalized and meaningful (a simple exit ticket might be, “Restate your core values for dialogue. How do you feel your participation today reflected, or didn’t reflect, your core values?”). There might also be a meaningful application for accountability, as noting each student’s personal core values provides the instructor with a point of reference for addressing problematic behaviors.

Next week is the final entry in our summer reading series! Rather than discussing a new text, I will be resharing all of the resources created over the summer and re-linking all of the posts.