On Thursday, September 2, Craig Campbell shared his project, “Anthropocene Greetings,” with the Faculty Fellows. Campbell is an Associate Professor in the Department of Anthropology and directs the Intermedia Workshop at UT Austin. He is also part of the collaborative Bureau for Experimental Ethnography.

“Birthday (humorous);” “Anniversary (special);” “Graduation (money holder); “Any Occasion (blank).” Most of us have perused the rows of greeting cards at a drugstore or Target, looking for an appropriate sentiment to send to a nephew who is getting married, or a far-away friend celebrating a birthday.  But what is a greeting card, really, and what does it do? What sorts of social relations does it make and sustain? Campbell’s project, “Anthropocene Greetings,” seeks to explore the possibilities offered by creating and sharing greetings that address climate catastrophe.

Campbell presented from inside the Design Lab in the campus Fine Arts Building. He introduced the Fellows to the Rob Roy Kelly American Wood Type Collection, which include the 19th Century typefaces he has used to make a variety of anthropocene greeting cards.

Campbell describes  Anthropocene Greetings as a project of research-creation, a methodology that considers the place of making in the practice of research. Citing the work of Erin Manning and Brian Massumi in Thought in the Act and Natalie Loveless in How to Make Art at the End of the World: A Manifesto for Research-Creation, he explained that research-creation permits movement between disciplinary territories and asks the question, “what counts as research?”

Campbell walked the Fellows through the process of creating a letterpress print, showing them the Vandercook press used to print the cards. He emphasized the embodied and sensory nature of the printmaking process: the ways in which the printmaker becomes related to the machine as it forces certain postures or bodily behaviors, the squelch of the ink as it is expressed. The process forces the maker to slow down. The type must be set, the paper cannot be rushed through the press, the ink must dry between each color application. For Campbell, the slowness of the process allows for different kinds of thinking.

Greeting cards serve as a form of “human infrastructure,” helping us to send words of condolence or celebration while alleviating the burden of coming up with them on our own. They are “gestures of concern” (Ingraham 2020) that promote shared awareness and seek to create connection. Sending a card permits us to discharge an obligation with minimal effort and, perhaps, minimal risk. Fellows discussed what sorts of accountability and care greeting cards in general, and Campbell’s Anthropocene greetings in particular, offer.

The climate crisis prompts us to question the effectiveness of individual acts when confronting complicated and multi-pronged problems. Loveless suggests that research-creation “can persuade us to care and to care differently” (2019: 107). Making and sharing Anthropocene greetings provides a means to communicate concerns about climate change, a small way to shore up the world, a minor gesture that reminds “us” that we’re all in this together, though we may not experience it in the same way. Perhaps expressing care through the template of a card creates more mental and emotional space for other, more large-scale, efforts and affects.

The climate crisis prompts us to question the effectiveness of individual acts when confronting its complicated and multi-pronged  problems. Loveless suggests that research-creation “can persuade us to care and to care differently” (2019: 107). Making and sharing   anthropocene greetings provides a means to communicate concerns about climate change, a small way to shore up the world, a minor gesture that reminds “us” that we’re all in this together. Perhaps expressing care through the template of a card creates more mental and emotional space for other, more large-scale, efforts.

Fellows questioned whether the form of the greeting card works across different social and cultural contexts, citing communities in which cards are not part of a shared affective vocabulary. They also explored “touch” as both a physical form of, and a metaphor for, care: keeping in touch, a touching message, feeling moved by a message. What about moments when touch and closeness are undesirable?  Liberal ideals of community and commons stress conviviality, but Covid puts pressure on those ideals.  If the cards are about creating social relations, what sorts of relations are created when they are sent to those who deny climate change? Perhaps the cards communicate dissent, or serve as provocations.

The question of access also surfaced. Printmaking requires access to materials and equipment.  Additionally, there are many kinds of print cultures. What are the possibilities for meeting communities on their own terms? How does literacy work into the the question of affect? Can communities that don’t operate in that mode participate in the project? What would broadening the typefaces used in the cards imply?

Campbell acknowledges the limitations of the form, while positing it as a site of possibility. Non-literate people live among literate people; cards are often read aloud or become prompts for narratives, like photos in albums. Once the card is made and sent, it is in the hands of someone who can alter it. The cards provide a low-stakes invitation to play even if the maker or recipient is not personally familiar with the custom. Future plans include workshops to be hosted in Regina, Saskatchewan, Canada with Cree participants, and at Marfa Community Print in West Texas. Working with Cree syllabics might require making a new typeface, while the Marfa site could allow for access to Spanish language typefaces.

Creating anthropocene greetings provides an opportunity for conviviality that pushes against and extends beyond congeniality and what  Teju Cole, writing in The Atlantic,  calls the “sentimental need to ‘make a difference'” (2012) that undergirds many white Western responses to social injustices. A greeting card cannot halt climate disaster, but its creation and dissemination can be part of efforts to sustain community.  It’s an imperfect response to an impossible situations. As Campbell said in closing, everyday materials present much with which to work. 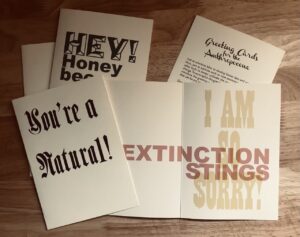 The Fall 2021 Faculty Fellows met for the first time on Thursday, August 26, led by Rabbi Neil Blumofe, our Community Fellow. Blumofe leads Congregation Agudas Achim, a synagogue in Austin. He presented the concept of “shemittah,” a sabbatical year, a time at which routine is disrupted and the land is allowed to rest. His project—which he is approaching as a spiritual autobiography—seeks to consider shemittah within the framework of land ethics and conservation. His reflections come just before the celebration of the Jewish New Year of 5782, a shemittah year which begins on the evening of September 6th.

Blumofe sees the sabbatical year as a way to disrupt routine and as a way to give poise. He began the session by sharing photos from a recent trip he made to the western USA: open landscapes populated by bison; mountains; and glacier lakes. The two final photos showed sites that mark depletion and the destruction of land, the Minuteman National Historic Site and the Sanford Underground Research Facility, located in an abandoned gold mine. He closed the introduction with song and an invitation to contemplation taken from Rav Kook quote found  in David Seidenberg’s essay on Jewish ecological thought:

“Contemplate the wonders of Creation, the divine dimension of their being, not as a dim configuration that is presented to you from the distance but as the reality in which you live. Know yourself and your world . . .”

Blumofe explained that shemittah is mentioned three times in the Hebrew Bible. Historically, it entailed a pause in the cultivation of land; remission of debt; and the release of enslaved and indentured persons.  The shemittah year resets the economy. Private property ceases to exist: plants and animals are given reign over land, and people may access it without restriction. Those in debt are amnestied.

Fellows explored what it means for land to rest. For what purpose?  Is it rested because of diminished productivity, so it can produce later?  Is it rested so that it may return to some previous state? If there are multiple users of the land, who decides when it should rest? What is the vision for the land after its rest period, and who determines that?

The discussion included different ways that humans interpret land at rest.  Human management of land often seeks to restore it to a previous state. Restoration implies modifications of some kind; perhaps the soil is amended, or trees are planted. The goal of restoration is to make the land function as humans think it should. Another way of “resting” land is through preservation, setting it aside and allowing nature to have its way.

Fellows suggested a third term: remediation.  Remediation is not a return to pristine state. Whereas restoration is an erasure of history, remediation doesn’t pretend to erase history. It leaves us with something less than pristine. It holds the trace of history and is a reminder of that.

Many classic—and some contemporary— environmentalist and conservationist texts ignore or idealize the perspectives of indigenous and other marginalized peoples and consign them to the past. Fellows grappled with how to read such works. How are these texts considered  historically and how do those conversations reverberate with current conversations?  How do we think about manumission during movements of abolition? What is the place of reparations?

For Blumofe,  the shemittah year provides sanctuary and allows a lessening of the hold of commodification. He understands it as a spiritual model, a perspective that is more than ours, regardless of privilege. To illustrate this, he turned to two texts, Leviticus 25:2 from the Torah, and a 2nd century commentary on that passage. The passage from Leviticus describes Moses on Mt. Sinai, receiving a message from the divine: “the land shall observe a sabbath, a sabbath of the divine.” The commentary focuses on why the concept of the sabbatical year is juxtaposed with Sinai.

Blumofe explained that the commentary asks, what does it mean to speak from a place that is Mount Sinai? It’s aspirational: Sinai is a place where everyone together was able to receive a revelation of hope and aspiration.  For Blumofe, shemittah is a way of thinking about reordering, a way to look at the world and find a way through. The  juxtaposition gives us a sense of how to live in the world, something to work in our everyday lives. We can also keep it ahead of us. We may not experience the shemittah, or know whose land it is, or even who we are, but we can move forward. The shemittah doesn’t just give you rest from exhaustion, it allows you to do the work.