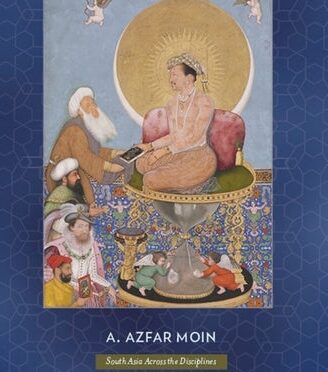 A. Azfar Moin, Associate Professor of Religious Studies, began his Faculty Fellows seminar by drawing attention to a map of the dissemination of Islam. The geographic representation painted a surprising picture: the Indian subcontinent (specifically Bangladesh, India, and Pakistan) is and has been home to the largest population of Muslims in the world. Moin noted that many may find this fact unexpected because, for the most part, the history of Islam has melded into the history of the Middle East (thanks to the legacies of 19th century Euro-centric historical representations). For this reason, Moin sees one of the primary goals of his new book project, Oaths of Peace: Sovereignty and Political Theology in Islam, as correcting this asymmetrical teleology – that is, he aims to “recast Islam in a new narrative frame – a deep history of biblical monotheism that moves through ‘Asia’ rather than the ‘Middle East’.” Each chapter of the proposed book will focus on an illustrative historical context through which Moin will trace back the long and complex chronicle of events bound by a common thread. In other words, the primary questions at stake for the Fellows and future readers of this work are: what assumptions about Islam can be reconsidered by decentering its focal point and what stories can we uncover by changing the dominant teleological narrative?

For the December 19th seminar, the Faculty Fellows read a draft of Moin’s opening chapter on “oath-taking” and “peace-making,” “Oaths of Peace.” In his manuscript, Moin explains that before Islam expanded into the “polytheistic” Asian context, there was no provision for a peace (sulh) oath to be solemnized. Generally, in the premodern world, for an oath (or, a “curse-in-waiting”) to have validity it had to be sworn on something both parties deemed significantly solemn. Since the time of early Islam, “people of the book” (i.e. Abrahamic “monotheists”) could legitimately swear on the God of Abraham to seal an oath. However, as Islam expanded, Islamic sovereigns faced a critical dilemma: clearly, oaths had to be taken to maintain order, but if a king were to accept an oath by a non-monotheist, he would be open to accusations of subverting the law of the Qur’an. To better understand the severity of this transgression, the Fellows read selections from Jan Assmann’s The Price of Monotheism (2009), wherein Assmann argues that the shift from the dominance of “polytheistic” to “monotheistic” religions were marked by moments that define the “Mosaic distinction” (2009). Assmann claims that, “what seems critical…is not the distinction between the One God and many gods but the distinction between truth and falsehood in religion, between the true god and false gods, true doctrine and false doctrine, knowledge and ignorance, belief and unbelief” (2009, p.2). In other words, accepting the oath of an “unbeliever” on a “false god” was tantamount to apostasy. Therefore, how was a king to govern a “pagan” people?

The hegemonic narrative used to answer this question is that conversion was, for all intents and purposes, the predominant method implemented by the premodern Islamic empire. Conversion, so the story goes, offered a silver-bullet solution to all problems of governance and control (not to mention ethics and religion). However, Moin notes that historians do point to an exception: the policy of religious “tolerance” practiced during the reign of the Mughal empire in India. According to the established narrative, the Mughals were eccentrics but pragmatic; to be able to rule with any sort of expediency in this polytheistic outpost of Islam, Akbar (16th century) took a hard turn away from the monotheistic practice of the day and implemented the policy of sulh-i kull, translated as “universal peace” (or “peace with all”).

Moin agrees that Akbar’s language of accommodation (i.e. viewing…“all sects of religion with the single eye of favor”) was bold and unorthodox in that it essentially claimed authority above God. In fact, ultimately the Mughal’s sulh-i kull allowed the king to accept oaths from members of other religions as they could swear on the king himself as a divine being. However, Moin argues that much groundwork had already been laid by Islamic sovereigns prior to Akbar’s reign and that such claims had to be derived from some existing authority – however, the techniques used by previous Muslim kings had also gone awry of established monotheistic doctrine.

By the 16th century, Akbar (and the Mughals who followed) had inherited both the problem of accepting oaths from non-monotheists as well as the precedents to be able to claim ultimate authority. For instance, Chinggis Khan, one of Mughal dynasty’s most important forefathers, and a “pagan”, brought a return to pre-monotheistic “sacred kingship” during his reign. After defeating the caliphate in 1258, the Mongols declared Chinggis Khan to be “the living god” or god on earth – establishing a narrative of the king as divine. If we look further back, prior to the Mongols, Mahmud, a Ghaznavid mamluk (“slave”) who came to rule Ghazna in the 11th century, provides us with an example of “peace-making” in the non-monotheistic context. After besieging Kalinjar, Mahmud, in addition to spoils, accepted a finger from the Hindu ruler in exchange for peace. However, the symbol of amputation being a Hindu one, the conquered ruler also had to wear a robe of investiture that carried the sacred authority of the Caliphal, the Islam authority. While Islamic sovereignty in this era was manifested in a concrete form, this sovereignty, nonetheless, made it possible to accept oaths from those who were not “people of the book” – an important precedent, as Moin shows.

The Fellows posed a number of historical questions on early Islam, specifically, and premodern oath-taking and religions, in general. Additionally, the group asked Moin to expound on his view of “sovereignty” and “sacred kingship.” To this, Moin responded that, while most scholars would claim that “sovereignty” is a post-nation-state notion that has no place in the premodern context, in reality, issues of governance and territoriality have always been with us. For this reason, early-modern notions of sovereignty can and should be equated with kingship. Similarly, Schmitt’s “political theology” is illustrative for showing that “sacred kingship” was common prior to the expansion of monotheism. Moin explained that Mughal-era sacred kingship was the subject of his first book, The Millennial Sovereign: Sacred Kingship and Sainthood in Islam (2014, Columbia University Press), and he aims to move beyond South Asia and the Mughals in his forthcoming work.

Many of the Fellows were aware of the recent Indian legislation (and subsequent rioting) that denies refugee status to Muslims through the Citizenship Amendment Bill – making Moin’s and the work of his colleagues in this field all the more timely and critical. Moin recently organized a workshop titled “Peace with All Religions (Sulh-i Kull): Indo Persian Political Theology and Cosmopolitanism”, which followed a semester-long seminar series sponsored by UT’s South Asia Institute, bringing this conversation to the wider academic community. If the interest and enthusiasm shown by the Fall 2019 Faculty Fellows is representative, Oaths of Peace: Sovereignty and Political Theology in Islam is sure to be an influential work in shaping the teleological narrative of Islam’s past, and hopefully, this more nuanced history can be used to better guide the current narrative.