The weather could not have been better. It was the making of a beautiful day.

It was a Sunday so naturally we slept as late as possible, which ended up being eleven thirty. I don’t know what it is about Italy, maybe the chirping birds, how early the sunrises, or that stupid cat that likes to meow nonstop at the wee hours in the morning, but it is almost impossible for me to sleep past nine. Where as at home in Texas I can easily sleep past noon on any given day. We then walked up to the arches to grab un bombolone and a few fragola for brunch. The weather was too nice to not spend the day outside, so we headed to The Garden (one of the main hangouts both day and night) to draw for a little while. 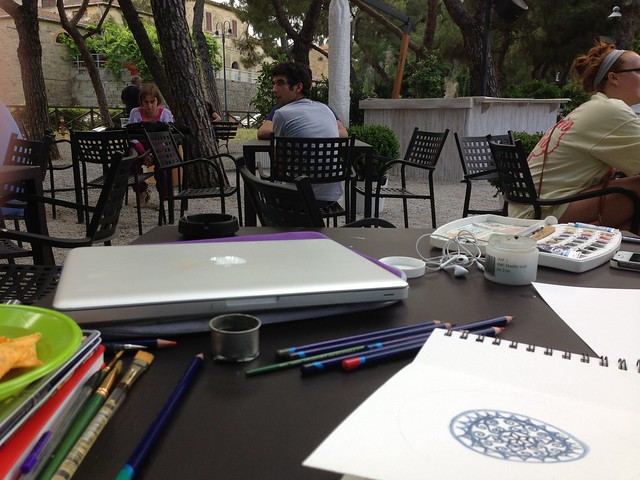 That afternoon Meredith and I had to do laundry and decided to go to the Laundry mat closer to the train station across town. It was a little difficult to find, so we had to ask some locals who did not speak any English and surprisingly we understood a little bit and found it located next to a Gelato place and a park. Laundry on this trip is not as big of a hassle as I expected it to be, possibly because the washers already have the detergent in them. Budding up and sharing the washer and dryer also helps a lot. Once the cycle was started we went across the street to grab some gelato and play on the playground. One thing I love about Italy is there are playgrounds everywhere; the gelato place had a playground, a restaurant we went to had a playground and the garden has a one including a trampoline (which cost two euro but is so worth it). I think it is great that all of these places are family oriented in that they serve alcohol and food with a nice place to sit and a tv playing and the playground in the same area. 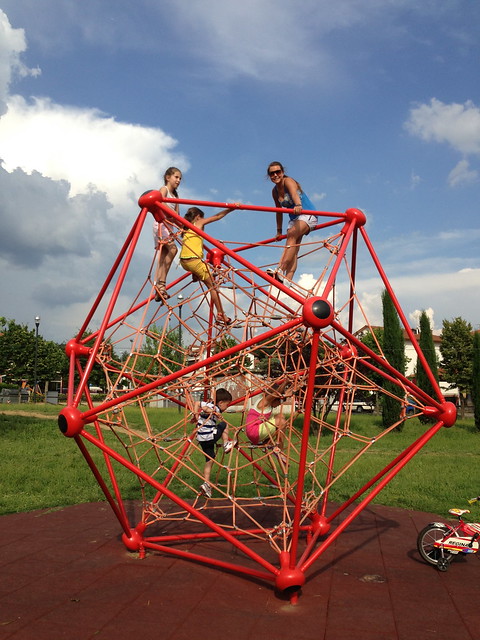 Meredith playing on the spider web in the park in CFno

The park across from the laundry mat has hands down been the best to play on since it is equipped with a zip line and human sized spider web to climb all over. In the park there was a water fountain that was quite refreshing and being used by many locals to fill up dozens of liter water bottles they had brought. After we wore ourselves out playing and the laundry was done we made it back in time for dinner at Santa Chiara and had a nice movie night while we continued to work on our paintings. All in all it was a great day to hang out in our lovely little town.