“Victory belongs to the most persevering,” a great quote from Napoleon Bonaparte, you know a true hero of human history (I am joking, he was not a nice man). This is what I remind myself after the day I beat Dan Sutherland in an intense game of table tennis. There is no “I” in team, but there is in winner, and I FINALLY BEAT HIM!!! Dan the Man, with his four Ping-Pong paddles and sly, backspin shots, was unable to defeat me this day. I will admit, in the beginning I was a bit cocky with my Ping-Pong ability, bringing my own paddle after I heard the legend of Dan’s love for the game. After already playing many, many games for the past four weeks, I have been unable to defeat Dan, but every game, I got just a bit closer. Every time I would go to play him, I would tell Ann and she always told me I “had to beat him,” and I had to follow through with that mission. This one day, that one game was my shot. It was a blur. I know the score was 11-9, but I couldn’t believe that I won. It was a fleeting moment. Dan attempted to pass over it quickly, asking to play again immediately admitting defeat. I took pity on and played one more game, to not completely embarrass him. Well, he won 11-4, so I think it is ok, but I will forever bask in the glory of beating Dan Sutherland! So the next time you think about the winning, think Michael Phelps, Queen’s “We are the Champions”, and me, Amy Anderson, Ping-Pong extraordinaire.

Below is the paddle that was used in the defeat of Dan Sutherland. 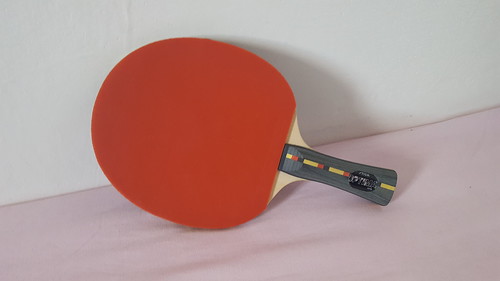 Below is where the defeat of Dan Sutherland took place. 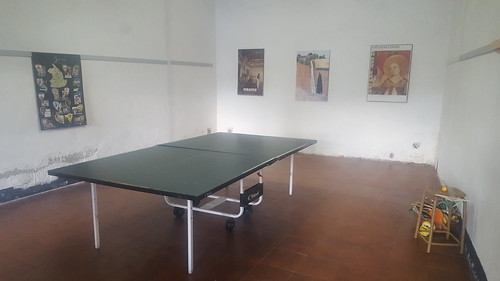