When we were in high school, you once took a picture of yourself and sent it to me. I told you that it’s a shame that you did not exist during the Italian Renaissance, because Botticelli should have painted you.

We were taking AP Art History together at the time, harboring parallel crushes on Mr. Holloway. I hope he never reads this. I think his room is also where I fell in love with you, slides of Botticelli on the wall in the dark, to the sound of his voice.

You were here, in Italy, one year ago. You sent me a postcard of the Birth of Venus. You referenced what I had said. Later that summer, on the phone, you told me about everything you had seen, the lovers you had taken up, rushing to make the train. I envied Italy.

My art history professor here in Tuscany has emphasized the fact that being in such an old country means following in the footsteps of generations of artists before us. But everywhere that I step, I am thinking of you. When I visited the Trevi fountain, I wondered what you looked like balancing on its lip. Who was here a year ago and saw you with your shaved head, dyed blonde, an undeniable vision.

In my backpack is a postcard that is addressed to you, again lamenting the fact that you weren’t around during the Renaissance. The image on the front is one I learned about from a documentary that played in a dark room. 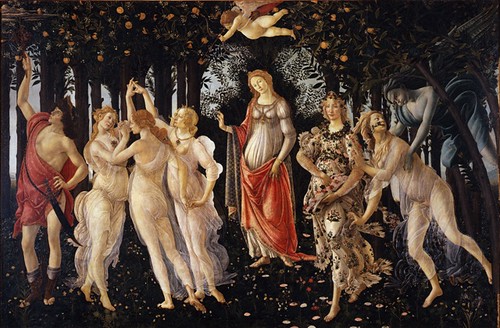 My flight lands at 4. Can we pick up Thai food on the way home? I just want to cuddle and I haven’t watched tv in 6 weeks.