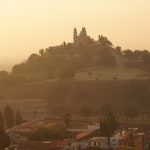 BY KELLY McDONOUGH One of the main attractions among the rare books and manuscripts at the Benson Latin American Collection is a group of late-sixteenth-century manuscripts and maps known as the Relaciones Geográficas (or RGs for short). As described in the Benson’s web portal to the RGs, these … END_OF_DOCUMENT_TOKEN_TO_BE_REPLACED