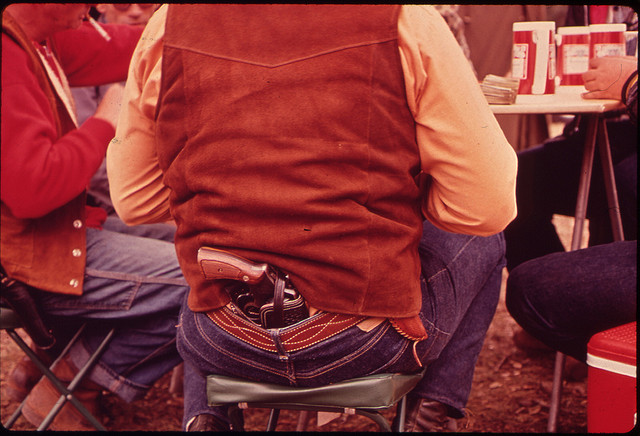 The New Yorker recently posted a poignant and direct commentary by Jeffrey Toobin concerning popular understanding, or the lack thereof, of the Second Amendment to the Constitution: “A well regulated militia being necessary to the security of a free state, the right of the people to keep and bear arms shall not be infringed.” Mr. Toobin introduces this phrase by stating, “The text of the amendment is divided into two clauses and is, as a whole, ungrammatical…”. Overall Mr. Toobin’s commentary provides numerous insights, but I find this introduction to the Amendment slightly in error. The sentence is extremely grammatical, and failure to recognize the grammatical relations involved opens the door to serious misinterpretation.

Begin with the claim that the sentence contains two clauses. This depends on how you interpret the term “clause”. If by “clause” we signify “a verb and a subject”, then yes, we have two clauses: “A… militia being…” and “the right… shall not be infringed”. But this interpretation of “clause” is very technical and may lead to some odd conclusions for the non-linguist. By this definition, “Bob winning was unfair” has two clauses, shown here in brackets: “[[Bob winning] was unfair]”. That is, [Bob winning] has a verb “winning”, and “Bob” is the subject, the one “winning”. And that whole notion, the winning that Bob seems to be doing, is itself the subject of the verb “was”, so we have a second clause. But that’s not the only notion of “clause”. More importantly it’s likely not the notion applied by educated 18th-century gentry.

We should apply this second notion of a clause in our interpretational voyage through the Second Amendment precisely because it is the definition one encounters in the study of classical languages such as Greek and Latin. At the time the Founding Fathers penned the Constitution, Latin formed a mainstay of upper-class education. Moreover, even in the unlikely circumstance that those Founding Fathers who shaped the phraseology of the Constitution had little familiarity with Latin, nevertheless the categories and structures of Latin permeated, or even provided the model for, the teaching and understanding of English grammar during that period.

One particularly important Latin construction, oft maligned by students of Caesar’s Commentaries, was the dreaded ablative absolute. The “ablative” is a Latin “case”: a way of modifying a noun to show its function in a sentence. English too has cases: “Bob” can be the subject of a verb (“Bob bites the dog”) or the object (“The dog bites Bob”). But the modified form “Bob’s” denotes possession: “I bit Bob’s dog.” By changing the ending, we alter the relation of the noun “Bob” to the other elements of the sentence. English has very few of these cases, Latin many. One of these is the ablative.

The Latin ablative plays a special role in absolute constructions: structures composed of a noun and a participle (like “being”, a non-finite verb) which are grammatically independent of the rest of the sentence, though they convey important information relevant to the sentence. Because they are absolute, i.e. grammatically independent, no particular case really suits the noun and accompanying participle: the case denotes the grammatical function of the noun in the sentence, but a noun in an absolute construction has no such function. Nevertheless Latin as a linguistic system requires each noun to have a case, just like English requires us to say “I go” rather than “me go”. And so Latin tosses absolutes into the ablative — the junk case, really, the case that Latin puts nouns in when it doesn’t know what else to do with them.

Ah, Latin. How quaintly antique with its numerous cases and its ablatives absolute. Fitting that Latin and its complicated grammar should be confined to the Halls of History — or of the Vatican! But… we have absolute constructions in English too. They’re often short and frequently informational throwaways. Imagine, for example, a debate hosted by a moderator. After a comment by one debater, the moderator might shift to the second debater by saying, “That being said, we should ask the esteemed Ms. S…”. That little introductory quip, “that being said”, is an absolute. It has no grammatical relation to our asking something of Ms. S. Sometimes we shorten it even further: “That said, we should…”.

So absolutes are all over the place, both in English and in Latin. What’s their point? Grammatically, not much, since they’re absolute. Really they provide additional information bearing on the rest of the statement (otherwise they’d be left out, right?). For example, we find in Cicero’s Oration on Pompey’s Command: mercātōribus … iniūriōsius tractātīs bella gessērunt “(our) traders having been treated rather badly, (our ancestors) waged war” (5). And in his Oration for Milo: semper exīstimābitis vīvō P. Clōdiō nihil eōrum vōs vīsūrōs fuisse “you will always think that, (with) Publius Clodius being alive, you would never have seen any of these things” (28). Evidently it’s up to the reader to figure out the connection, but these examples show they can be pretty important: e.g. whether Publius is alive or not decides the question of how likely you are to have seen these things. In fact a primary use of the absolute construction in Latin is to give the conditions under which the rest of the sentence is valid. And we see this in everyday English: “My philosophical leanings being what they are, I would draw a different conclusion.” The absolute tells me what has to be true for me to draw my conclusion, i.e. my leanings have to be a certain way.

And that brings us back to the Second Amendment. The Amendment, as written, is in fact eminently grammatical. The Founding Fathers were no strangers to absolute constructions. Still in that era the height of written English style was to emulate compositional techniques of the classical Greek and Latin authors. And in the Second Amendment, everything up to the comma — “A well regulated militia being necessary to the security of a free state,…” — is an absolute construction. It is not a “clause” in our schoolmarmish sense of the word, nor is it meant to be. Grammatically it has nothing to do with the rest of the sentence: “regulated”, “militia”, “necessary”, “security”, “free”, “state” — none of these words recur in the sentence. So why is that absolute there? To provide the conditions under which the rest of the sentence is valid. That is, “the right of the people to keep and bear arms shall not be infringed” only insofar as this accords with the necessity of maintaining a “well regulated militia” to insure the “security of a free state”.

Where does this leave us? As a well constructed sentence, the Second Amendment says this: the people have a right to bear arms, inasmuch as that pertains to forming a regulated militia to secure a free state. Nothing more, nothing less. What of the right to personal self-protection? Who knows! — the Second Amendment does not talk about that. The main clause, “the right of the people to keep and bear arms shall not be infringed”, cannot be read without the preceding absolute — otherwise the Founding Fathers would have omitted that absolute. (I take it as given that they included in the Constitution only those words that they thought should be there and be interpreted; that they didn’t insert window-dressing or fluff.) Moreover, assuming the Founding Fathers were rather well educated, none of them would have misunderstood the limiting condition that the initial absolute put on the concluding main clause. Importantly it sets the topic: the militia, not the individual. We can certainly hem and haw as to the meaning of individual terms in the Second Amendment — “militia”, “well regulated”, “the people”, “security”, “infringed”, “arms” — but we should be crystal-clear as to the grammar. If one thing is manifest, it’s that the initial absolute puts a limit on the applicability of the main clause; the latter cannot and should not be interpreted without the former.

Nota Bene: The text of this post was actually written December 18, 2012. But we needed to create a blog here at the LRC in order to publish it! Of course in the meantime other scholars have had the same reaction to Mr. Toobin’s column, one of these being published in the excellent Language Log at UPenn. Regardless of any similarities, the two articles were written independently.