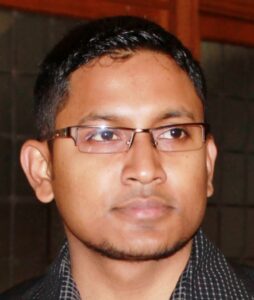 Dr Mo Maniruzzaman is an Assistant Professor in Molecular Pharmaceutics and Drug Delivery at College of Pharmacy, The University of Texas at Austin. Prior to this, he was a Lecturer in Pharmaceutics and Drug Delivery at the University of Sussex, UK. He studied and obtained a B.Sc Hon’s from University of Greenwich, UK with first class in Pharmaceutical Sciences in 2009. In the same year, he was awarded a prestigious ORSAS bursary followed by the University bursary to pursue a PhD in formulations of oral solid dosage forms and process engineering at the University of Greenwich. Dr Maniruzzaman obtained a PhD with no corrections (000422158 RDC/12/M-3/14.8) with two accompanying awards including the Vice Chancellor’s Award in 2013 for the outstanding performance in his doctoral research. He is a pharmaceutical scientist member (SRPharmS) of the Royal Pharmaceutical Society, UK and served as Chair of UoG-AAPS Chapter. During the past years of research, he has attended various international conferences and delivered more than 20 podium presentations and invited lectures on different novel formulation aspects which have motivated him to publish more than 75 peer reviewed articles in well recognised international journals including 8 issued patents and patent applications and 3 books (including 1 in Wiley, 3D and 4D Printing in Biomedical Applications). He also contributed 10 book chapters to various books. Having sitting in the ‘Editorial Board’ of more than 5 internationally recognised pharmaceutical sciences journals such as AAPS PharmSciTech, Current Drug Delivery, Heliyon, Legume Science, he has recently edited various special issues, “Continuous Manufacturing and Process Analytical Tools” in International Journal of Pharmaceutics with another two  in Drug Delivery and Translational Research and Pharmaceutics, respectively. He’s currently editing a special issue on “3D and 4D Printing of (bio)materials” for Polymers. He has secured various substantial internal and external grants (as PI) and more than 11 academic/professional awards.

Niloofar received her PhD in Materials Science Engineering and Commercialization from Texas State University in 2020. Her research was focused on the development of biocompatible nanomaterials for cancer therapy. She is interested in research in the fields of nanomedicine, nanobiotechnology, biosensors, biomaterials, polymer science and engineering.

Dr. Karen (Yu) Zhang received her Ph.D. degree in 2018 at chemical and biological engineering from University of Sheffield. She subsequently worked as postdoctoral associate on ink formulation for printing of security features at University of Liverpool for one year. She is currently a postdoctoral fellow at University of Texas at Austin (from September 2019). Her research interest is focused on 3D / 2D printing of bio-materials for medical applications.

Jiaxiang is a pharmaceutical scientist and chemical engineer with research experience in diverse process and formulation development. Jiaxiang was previously ORISE fellow in the U.S. FDA and worked on regulatory sciences related to continuous manufacturing. Prior to joining FDA, he received his Ph.D. from the University of Mississippi in 2018. He is interested in patient-focused drug delivery systems and continuous manufacturing process development.

Aakib graduated with a Master’s degree in Mechanical Engineering (Design & Manufacturing) from University of Texas Arlington, and received his Bachelor’s degree in Mechanical Engineering from Gujarat Technological University in India. He worked as a Research Assistant at University of Texas Arlington Research Institute along with his graduate studies and was also recognized with meritorious based scholarship during his undergraduate studies in India.

Mahmoud is currently a Research Scientist working in a collaborative project with Prof. Zhengrong Cui. He completed his Bachelor in Pharmaceutical sciences and B.Sc in Pharmaceutics from Faculty of Pharmacy – Helwan University, Egypt. Mahmoud was awarded Research and Teaching assistantship, Egyptian Government Scholarship, and Best Master thesis Award. He is currently working on tumor therapy using siRNA and chemotherapy- loaded nanoparticles, vaccines, and additive manufacturing techniques.

Bhupendra graduated with an M.Sc. in pharmacy from Kyungpook National University, South Korea in 2020, and obtained his bachelor’s degree in pharmacy from Kathmandu University, Nepal in 2016. While a master’s student, he was the recipient of the best thesis award, travel grant award-Japan, KNU international graduate scholarship and the best poster presentation award. His research interests include 3D printing technology for patient-centric medicines and targeted drug delivery, continuous manufacturing of pharmaceuticals and application of QbD/PAT tools for product/process optimization. Along with the academic duties, he divides his time with sports, movies and professional clubs.

Ishaan is a first year graduate student in the Division of Molecular Pharmaceutics and Drug Delivery at The University of Texas at Austin. Prior to this, Ishaan completed his master’s in Pharmaceutics and Drug Design from the University of Minnesota where he was inducted into the Rho Chi Honor Society. Ishaan also held a number of important leadership positions during his time at UMN. His research interests include additive manufacturing of solid oral dosage forms and smart bio-materials.

Vineet graduated with a Bachelor’s degree in Pharmacy from University of Mumbai in India and received his Master’s degree in Pharmaceutical Sciences from Virginia Commonwealth University, USA. He was also recognized with the ‘M.S. Scholarly Excellence Award’ which is given to a student based on excellence in research and scholarship, and academic performance. His works at UT Austin involve developing a process and technology for faster and efficient manufacturing of novel drug delivery systems.

Anqi is a first-year PhD student who will join Maniruzzaman Group in Fall 2020. She has received her Bachelor’s degree of Pharmaceutical Analysis from Shenyang Pharmaceutical University, China, and obtained her Masters’ degree in Pharmaceutics from University of Minnesota. Her current research project at UT Austin is focused on 3D printable oral formulations and process optimisation.

Amit graduated from Manipal College of Pharmaceutical Sciences with a bachelor’s degree and obtained his master’s degree at the University of Mississippi. During his time at Ole Miss, he pursued research aimed at finding innovative solutions to enhance the efficacy of and overcome problems related to targeted drug delivery systems. Amit received various awards for his outstanding performance at Ole Miss (Phi Kappa Pi, Gamma Beta Pi, Golden Key, 3MT thesis competition etc.). His current research at the University of Texas at Austin is on 3D bio-printing and smart bio-materials.

Rishi is currently pursuing his PhD in Molecular Pharmaceutics and Drug Delivery at the University of Texas at Austin. He received a Masters degree in Pharmaceutics and Drug delivery with the ‘Phi Kappa Phi’ honour because of his excellent academic standing from the University of Mississippi. Rishi has worked on multiple projects exploiting the continuous manufacturing characteristic of Hot-Melt Extrusion technology. His research interests include HME, 3D printing, PAT (QbD) and targeted drug delivery. He aims to bridge the gap between industry and academia with his research.

Jiawei graduated from Sichuan University, China with a Bachelor Degree in Pharmacy followed by Bachelor in Literature. She has completed her M.Sc in Pharmaceutics from the University of Minnesota, USA. Jiawei was also awarded various awards for her academic achievements. Her current research at UT Austin, involves advanced drug delivery and additive manufacturing for the development of novel drug delivery systems.

Yan is currently in her second year PhD funded by CSC-Sussex Scholarship 2017. Prior to this, she completed her M.Sc from School of Pharmacy, UCL, London. Her research project is focused on 3D bio-printing of scaffolds, drug delivery and tissue engineering. She is actively publishing innovative research in multiple high impact journals.

Deck is currently a doctoral student in the School of Life Sciences at the University of Sussex. His research project is on 3D printing technologies for the manufacturing of a sensor integrated smart medical devices. He is also interested in the development of bio-materials, and the design, process engineering of additive manufacturing techniques.

Amaka Epoh is a current P2 Pharm D. student at the University of Texas at Austin, College of Pharmacy. She has her Bachelors in Microbiology with a minor in Biochemistry from University of Nigeria. Amaka also currently serves as an ambassador for the College of pharmacy.

Andrew is currently a second-year Pharm D. student at the University of Texas at Austin. He currently serves various leadership roles within the College including SSHP’s Clinical Skills Chair, SNPhA’s Chronic Kidney Disease Chair, as well as an ambassador for the College of Pharmacy.

Akshaj Jois is currently an undergraduate student at the Cockrell School of Engineering, studying biomedical engineering. He is an avid tennis player, musician, and an aspiring biotech entrepreneur interested in pharmaceutical additive manufacturing.

Bhavana Dokka is a sophomore biochemistry major and a business minor student at UT Austin, working towards joining a PharmD program. She is passionate about pharmacy & healthcare and aspires to be an accomplished professional in exploring pharmaceutical product innovation, development, marketing, and global adoption.

Chris is a 2nd year student in the Pharm.D program at the University of Texas College of Pharmacy, and also obtained his Bachelor’s of Science in Public Health from the University of Texas at Austin. Apart from his interests in the pharmaceutical/biotechnology industry and involvement with different organizations at the college, he enjoys reading, listening to new music, and keeping up with the NBA.

Aneela will join PharmE3D Lab in Summer 2021 as a visiting scholar under IRSIP, HEC program. She is currently pursuing her Ph.D. in Pharmaceutics at the Government College University Faisalabad, Pakistan under the supervision of Dr. Sajid Asghar. She holds a master’s degree in Pharmaceutics and a bachelor’s degree in Pharmacy. She has worked as a pharmacist in a hospital. Her research interests include novel drug delivery systems, orodispersible dosage forms, nanoemulsions. Her recent research is about novel microemulsion-based gel and the nanoencapsulation of therapeutic oils to enhance the activity.

Dr Shafi Arifuzzaman graduated among the top students in his undergraduate chemical engineering class at Bangladesh University of Engineering and Technology (BUET) and served as a Lecturer for a year at the same university. In 2001 he received the President’s Scholarship at the University of Western Ontario, Canada, and joined Crystallization of Pharmaceuticals Laboratory and studied inline control, synthesis, and purification of calcium phosphate nanocrystals. Later he obtained a Ph.D. in Chemical Engineering with a graduate minor in Biotechnology from North Carolina State University in 2010. His key focus is in advanced data analytics and machine learning for semiconductor processes optimisation.