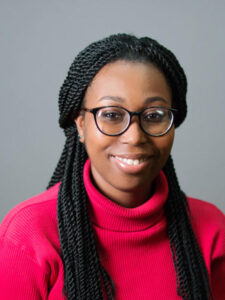 Karl-Mary Akre is a first-generation Ivorian American writer based in sun-drenched Austin. After garnering her bachelor’s in English at Barnard College of Columbia University, she worked as the creative assistant at Viacom Velocity and later served as the media specialist of the Elsie K. Sloate Media Center at her alma mater. She has also been a PERIPLUS Fellowship finalist, a mentee in WOC Unite’s #Startwith8 program, and a 2021 Athena Film Festival Virtual Writers Lab participant. Currently, Karl-Mary is a screenwriting fellow at the Michener Center for Writers at UT Austin.

Note: Karl-Mary is taking appointments via Zoom for fall semester.

BOOK AN APPOINTMENT WITH KARL-MARY