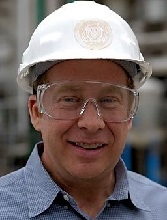 Dr. Frank Seibert is a Senior Research Engineer and the Technical Manager of the Separations Research Program (SRP) at The University of Texas at Austin.  Dr. Seibert has worked at the Separations Research Program since 1986 and is currently responsible for managing the program’s unique distillation and liquid extraction research pilot plant facilities.   He coordinates the program’s expanding pilot plant student and industrial contract research, which is often focused on process demonstration and mass transfer and hydraulic characterization of packings and trays.

Dr. Seibert co-supervises graduate students, serves on PhD committees and collaborates with industry on a daily basis through the SRP and as a consultant.  He has also taught liquid extraction and distillation short courses for industry and has over 22 years of distillation and extraction experience.

Along with continuing studies of packings and trays in distillation and extraction columns, Frank is currently working on the scaleup and pilot demonstration of varying carbon dioxide capture technologies associated with coal-fired power plants.  He is also investigating the feasibility of converting algae into biofuels and serves as a consultant for two related start-up companies.

Dr. Seibert has completed more than 300 distillation and extraction studies, generally of various contacting device geometries, and has authored or co-authored over 40 technical papers and published reports.  He has three extraction and distillation related patents and has also co-authored two handbook chapters including the Extraction Section in the recent Perry’s Chemical Engineers’ Handbook, as well as another book, and is currently working on a contribution to a third book.

Frank Seibert has been a member of the American Institute of Chemical Engineers (AIChE) since 1982 and has served as a director of the Separations Division.  Frank was honored at the 2008 AIChE National Meeting for his contributions in extraction and distillation. He has authored or co-authored more than 50 presentations at past AIChE meetings and has chaired more than ten meeting sessions.  Frank participated in the “Pioneers of Extraction” session held at the 1995 Annual Meeting in Miami Beach. Frank is currently the Extraction Area Chair for the Separations Division of the AIChE.  He is a Registered Professional Engineer in the State of Texas (no. 69,470) and serves as a reviewer for the AIChE Journal, Journal of Membrane Science, Chemical Engineering Science, Industrial & Engineering Chemistry Research and the Journal of Optimization and Engineering.