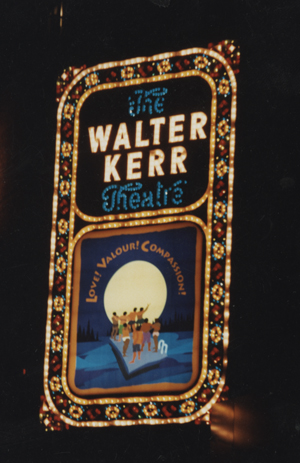 Today is World AIDS Day, a day dedicated to raising awareness about HIV and AIDS, remembering the dead, and celebrating the living. The Ransom Center’s collection includes several people, both famous and ordinary, whose lives have been touched by AIDS. Among the most well known is Terrence McNally, whose plays Lisbon Traviata (1985, 1989), Lips Together, Teeth Apart (1991), A Perfect Ganesh (1993), and Love! Valour!
Compassion! (1994), as well as the Emmy-winning television movie Andre’s Mother (1988, 1990), incorporate AIDS as part of the social, emotional, and biological fabric of their characters’ lives.

All five of these works are represented in the McNally papers at the Ransom Center, in addition to manuscripts, correspondence, and production materials related to his other works, and other materials dating from his high school years through the present. His papers also include 174 computer disks with contents ranging from manuscripts to correspondence to photographs. Digital drafts exist for three of the plays mentioned above: Lips Together, Teeth Apart; A Perfect Ganesh; and Love! Valour! Compassion!

Love! Valour! Compassion!, which won a Tony for best play in 1995, is the story of eight gay friends, one of whom owns a large house in the Hudson Valley where the group meets for holiday weekends during one summer. These gatherings become a celebration of friendship and an exploration of life and desire in a time of AIDS. Andre’s Mother first took shape as a short play written for Urban Blight, a musical revue performed at the Manhattan Theater Club in 1988. Both the original eight-minute play and the television movie version, which aired on PBS in 1990 as part of the American Playhouse series, explored the confrontation between Andre’s lover and his mother, and were set at Andre’s memorial service shortly after his death from AIDS.

In addition to drafts with McNally’s handwritten corrections, the boxes related to these two works contain a small amount of correspondence from ordinary people who wrote to share their personal experiences with McNally after seeing Andre’s Mother or Love! Valour! Compassion! One letter is from a mother who lost her own son to AIDS. Another is from an older gay man who cared for his long-time partner in his final years. In 1991, Frank Rich wrote in a New York Times review that Lips Together, Teeth Apart, The Lisbon Traviata, and Andre’s Mother “offer unsentimental hope about the possibilities for intimacy at a time when fear and death rule.” McNally’s larger collection and this small pocket of correspondence are a testament to the power of stories, both public and private, to connect people.