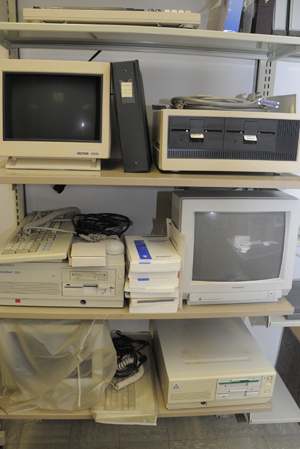 Since the early 1990s, the Ransom Center has been receiving computers, disks, and similar media as part of its manuscript collections. One of the biggest challenges we face when trying to preserve these materials is accessing files that are on older disks.

Some of the items in our collection, such as CDs and DVDs, were created relatively recently and can be read using modern computers. But, to access older types of media—for example, 8-inch and 5.25-inch floppy disks or 3-inch Amstrad disks—we must first find the correct drive or computer.

Thanks to the generosity of the University’s Information Technology Service department and individual donors, the Ransom Center has begun acquiring legacy computer equipment to use in accessing these older formats. Recent donations include a Kaypro II, a Victor 9000, related computer manuals, and blank floppy disks.

We have used these donations in a few different ways. The first is to facilitate physical access to the legacy media in our collections. Staff members have also used the older computers and disks as visual aids when talking with students, the public, and other interested parties about born-digital archives and preservation. The point of these talks is to educate people about the need for digital preservation. Seeing a Kaypro II, for example, or an 8-inch disk often prompts people to share stories about their early experiences with computer technology, or, if the audience consists of younger students, to ask questions about “ancient” media like 5.25-inch floppy disks.

One of the most exciting aspects of digital preservation work has to do with access. How will people who come to our reading room engage with born-digital materials? One possibility is that people will be interested in interacting with a computing environment similar to the one used by a particular author. Loading copies of files from an author’s collection onto a replica of the computer he or she originally used to compose a work would enable a visitor to sit down in front of an Apple ][ Plus, for example, and explore drafts of the stories Denis Johnson wrote using a similar machine. To plan for this and other possibilities, we have begun collecting computers similar to ones used by the authors whose born-digital materials reside in our collection.

If you have computer equipment that you would like to donate to help the Ransom Center in its digital preservation, access, and outreach efforts, please contact Lisa Snider, the Center’s digital archivist, at lisasnider@utexas.edu. Specifically, the Ransom Center is looking for the following items: