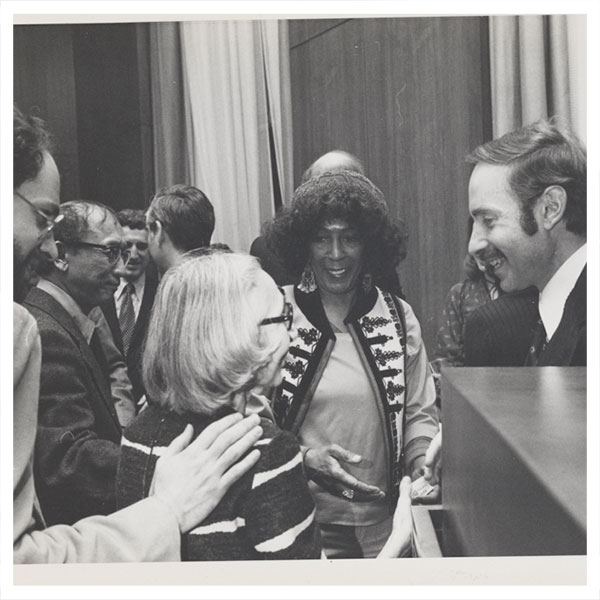 by Ellen Cunningham-Kruppa and Eric Colleary

Mel Gussow was the lead cultural critic for the New York Times for more than 40 years. Throughout his career, he recorded interviews with stars and unknowns of the American and British theatre.

These often candid interviews capture artists in a specific moment, responding to issues of the day. Katharine Hepburn rails against 1970s theatre and film for poorly written scripts and what she viewed as perversions. David Hare comments on Thatcherism and the attack on public theatre. Arthur Miller wrestles to explain his morbid fascination with the performativity of George W. Bush’s presidency. Andrew Lloyd Webber reflects on his recent marriage to Sarah Brightman and his desire to write something that would highlight her vocal range, foreshadowing his creation of The Phantom of the Opera.

Gussow conducted interviews in various venues largely in and around New York City. Responding to his well-researched questions, subjects discuss their processes as writers, performers, directors, and artists. The interviews are conversational in tone, often recorded in restaurants and cafes with frequent interruptions to order meals or pay bills. Telephone calls and room service deliveries punctuate recordings produced in homes, hotels, and offices.

Interviews informed Gussow’s writing for the Times, as well as eight of his publications documenting the careers and processes of noted writers like Samuel Beckett, Arthur Miller, and Tom Stoppard.

Cultural institutions face losing the content of audiovisual recordings within the next 10 years, as analog formats become obsolete and physically degrade.

In 2015, the National Endowment for the Humanities awarded the Ransom Center a grant to conduct a preservation survey of the Center’s non-commercial audio holdings. Based upon the yearlong intensive study and documentation of the collections, which prioritized holdings based on condition and research value, the Center is working to preserve these unique recordings.

Our digital archivist transfers digital masters to the Texas Advanced Computing Center for long term storage. Access copies are then made available for education and research.

The Ransom Center received generous funding from the Council on Library and Information Resources’s Recordings at Risk program to contract with The Northeast Document Conservation Center for digitization of the Gussow recordings.

A finding aid for the manuscript portion of the Mel Gussow Collection can be viewed online.