Hildebrand managed the operations of the Book Cataloging Department and contributed to Ransom Center curatorial efforts. 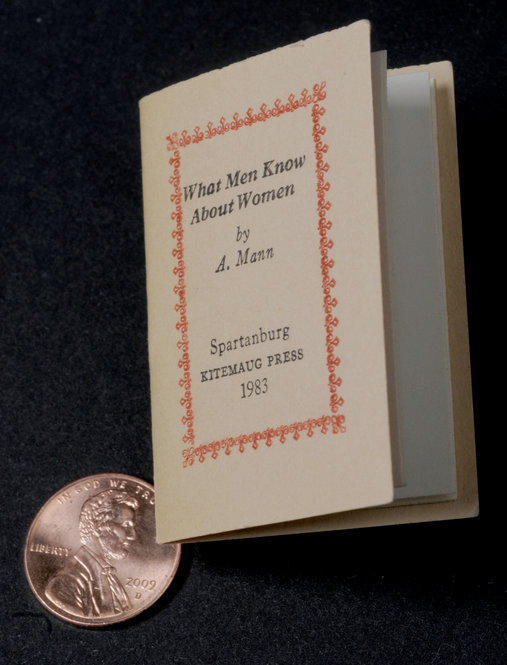 The Ransom Center recently received a gift of more than 60 miniature books from printer, collector, and aficionado Duane Scott, proprietor of the Scott Free Press. The gift includes books Scott printed under his Scott Free Press imprint, as well as examples published by others such as Achille J. St. Onge, The Press of the Indiana Kid, Arm and Hammer Press, Black Cat Press, The Hillside Press, and Tabula Rasa Press. Scott’s gift is a substantial addition to the Ransom Center’s collection of miniature books.

In But, Why Tabula Rasa? John Lathourakis ponders “What makes a somewhat normal person get into an activity as insane as miniature books? Some say it is a form of self-punishment for transgressions too base to describe; others merely look at miniature book people as simple souls who are normal in every respect except that they were born brainless. I have a less clinical approach. Simply stated, printers and publishers of miniature books are possessed people whose every waking moment is spent trying to solve unsolvable problems.”

Latourakis’s diagnosis may be somewhat correct for Scott, as he was drawn to miniature books in part because they are difficult to execute well. On his visit to the Ransom Center he talked about the seemingly impossible tasks of aligning a page’s front and back during printing, setting miniscule pieces of type by hand, and the general difficulties of working on a very small scale. In bookwork, a diminutive format amplifies difficulty because one’s tools stay the same size, while the object to which they are applied is no bigger than 3 inches, and often much smaller. A well-done miniature book showcases the craftsperson’s ability; a poorly executed book highlights his or her failings. Scott’s miniature books belong in the former category.

Scott had another reason for becoming a printer of miniature books. Years ago, while already a letterpress printer, he met another printer specializing in the genre. Scott admired the printer’s work, but the printer refused to sell his books; he would only trade for another miniature book. So, Scott printed his first miniature book, Mark Twain’s How I Edited an Agricultural Paper, in order to have an item for trade.

Scott’s books are all completely handmade, from the setting of the tiny six-point type, to the binding, and of course, the printing. In some cases, he also made his own paper. His 1984 publication, Henrik Ibsen’s Nora Awakened: A Portion of a Doll’s House was published in an edition of 250 copies, with 100 of them printed on 100-percent rag paper made from old cotton shirts, handkerchiefs, sheets, and pillow cases. Another of Scott’s books, Oriental Sayings, used paper made from denim. His daughter Caroline recalls, “He put out the word to the family to save our old cotton, and when we went to visit, we would haul along any worn-out clothes and linens.” Scott processed the pulp in an Umpherston beater and formed the sheets himself.

The topical matter of Scott’s collection is broad. The writings of Mark Twain are oft repeated, as are excerpts from other well-known authors such as Robert Frost and Henrik Ibsen. As expected, many of the books are concerned with printing, the book arts, and book collecting, including two books on miniature bookplates and type and paper specimen books. A book on Gutenberg contains a miniature facsimile leaf of the Gutenberg Bible, and a work on Ottmar Merganthaler (inventor of the Linotype machine) contains a Linotype circulating matrix. Perhaps the frustrations associated with printing miniature books incline their makers toward humor, as many of the books are quite funny, or at least take a very light-hearted tone. I can’t close this post without mentioning two of the more humorous works in Scott’s collection: What Men Know About Women by A. Mann, which is entirely blank inside, and the humorous and racy Shaggy Dog Story, a story about a dog named Sex. 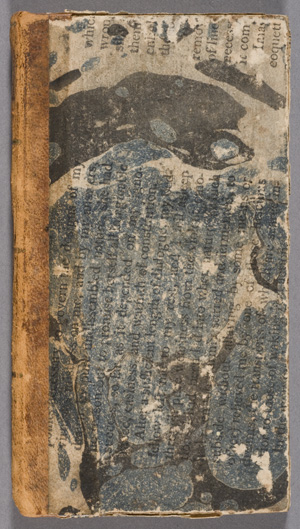 We recently received a reference question regarding our copy of The Farewell Address of Gen. George Washington (Keene, N.H.: Printed by John Prentiss, 1812). The question had nothing to do with the work but with the possibility that our copy might be bound in boards covered with sheets from a supposedly suppressed edition of John Cleland’s 1748 novel Memoirs of a Woman of Pleasure (commonly known as Fanny Hill). And in fact, our copy is bound thus. (It is not uncommon to find “printed waste” in early bookbindings. Paper, being an expensive commodity, was reused whenever possible in the production of books.)

The text of the sheet used in our binding is not too racy. We have, for example, “After a sufficient length of dialogue, my bedfellow left me to my rest, and I fell asleep, through pure weariness from the violent emotions I had been led into… .” What preceded this passage, however, is best not discussed here.

Last year the Ransom Center received as a gift a bible printed in 1481, in Basel by Johan de Amerbach, that was adorned with a 19th century fore-edge painting by bibliophile John T. Beer. The scene is described in a checklist of Beer’s fore-edge paintings simply as “A scene on the Nile,” and the image is sufficiently vague to merit such a title.

What biblical paintings might have inspired the painting? Some have suggested Shadrach, Meshach, and Abednego; Joseph and his brothers; and the Holy Family leaving Egypt. Can any of these suggestions be substantiated based on the details present in the painting? Take a close look.