Mears oversaw a collection of artwork from the Americas, Asia and Europe. He worked with staff in all departments to provide patrons access to the art collection and served as a liaison to faculty and students in the University\'s Department of Art and Art History.

The stories I selected span three decades and show (Zora Neal) Hurston’s diversity in writing styles and subject matter. I created my illustrations from fragments of fabric, paper and faded photos. The layering of images, patterns and textures evoke the feeling of memory and old tales retold. So they become, like the stories, “Bookmarks in the Pages of Life.”—Betye Saar, artist’s afterword to Bookmarks in the Pages of Life END_OF_DOCUMENT_TOKEN_TO_BE_REPLACED 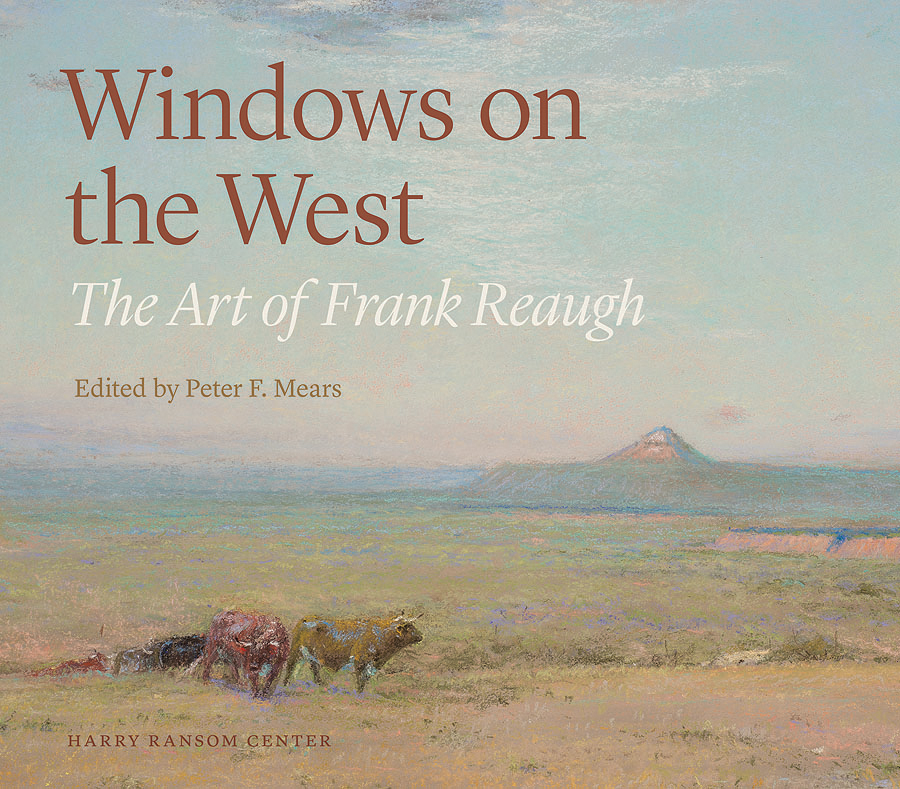 From August 4 through November 29, 2015, the Harry Ransom Center hosts the exhibition Frank Reaugh: Landscapes of Texas and the American West. The showcase displays over 100 artworks by renowned artist Frank Reaugh (pronounced “Ray”). To complement the exhibition, a companion book is available titled Windows on the West, The Art of Frank Reaugh, edited by Curator of Art Peter F. Mears. The excerpt below is Mears’s introduction to the book, titled “Rediscovering the Art of Frank Reaugh.” In it, he describes Reaugh’s life, vision, and legacy as one of Texas’s most iconic artists.  END_OF_DOCUMENT_TOKEN_TO_BE_REPLACED 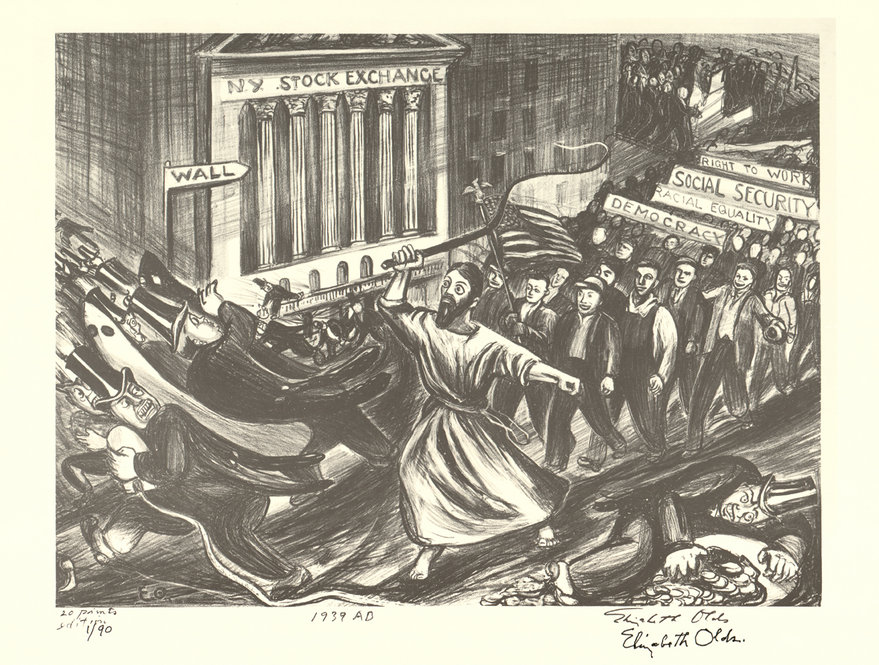 A bearded and robed figure, whip in hand, chases well-healed bankers and brokers in top hats down Wall Street. Their retreat, a frenzied stampede of cash, coins and streaming ticker tape, is followed by ranks of protestors carrying signs and banners reading, “Democracy,” “Racial Equality,” “Social Security,” and “Right to Work.” Elizabeth Olds’ lithographic print, 1939 AD, a modern reinterpretation of a famous biblical story, resonates today as it did almost three-quarters of a century ago during the Great Depression when millions of American workers struggled to make ends meet in a decaying economy. Olds’s satirical print, along with 11 other lithographs of the same time period (1934–1939), were reissued in 1986 as A Celebratory Portfolio to commemorate the artist’s 90th birthday. Her portfolio, a potent reminder of a dark period in America’s economic history, serves as a graphic example and tribute to the innovative arts programs established by President Roosevelt’s New Deal government under which Olds created and produced her prints.

Born in Minneapolis in 1896, Elizabeth Olds studied architecture at the University of Minnesota beginning in 1916 and later attended the Minneapolis School of Arts on scholarship. In 1921, she was awarded her second scholarship to attend the progressive Art Students’ League where she studied under painter George Luks, who became her mentor. Guided by Luks, Olds honed her drawing skills while on sketching trips throughout New York City’s ethnic neighborhoods. She also learned how to execute a portrait on these trips in the direct, vigorous style of the Ashcan School of which Luks was a member. In 1925, Olds traveled to Europe with financial assistance from friends, and in 1926, she became the first woman to secure a Guggenheim Traveling Fellowship, which enabled her to continue her studies in Europe until 1929.

An internship at a commercial printing company in the early 1930s—a time of transition for the artist—gave Olds the opportunity to become proficient in lithography. Inspired also by the Mexican muralists of the time, particularly José Clemente Orozco, Olds aligned her subject matter and style to make art that she considered “vital” and purposeful. In an interview with the Omaha World Tribune in 1935, Olds explained her artistic intentions:

“American artists have lately chosen to portray our own life. We find our subject on the streets, in the factory, the machines and workers of industry and on the farm. We aim to picture truly the life about us as the people we are in reference to the forces that make us. We choose all sides of life, searching for the vital and significant. What the artist says through his pictures is the important thing, not how it is done. …”

Thanks to the support of the Works Progress Administration (WPA), established in 1935 and its special programs such as the Federal Arts Program and the Public Works of Art Program, Olds maintained steady employment and utilized her printmaking skills to produce a number of deeply moving images, many of which are included in A Celebratory Portfolio. Olds focused primarily on the labor movement of the time period. Meat processing workers, coal miners, and steel workers were some of her favorite subjects as their working class ranks harbored many of the unemployed. Giving a gentle nod to the art of caricature, other more humorous works in the portfolio comment on the various social stereotypes found in Sidewalk Engineers, The Nun’s Union Demands Shorter Hours for Prayer, and the regimented ranks of the White Collar Boys. In A Sacred Profession is Open to College Graduates, Olds, a college graduate, fully sympathizes with the fears and trepidations of all college students confronting a weak job market.

Elizabeth Olds maintained a productive career throughout her long life before her death in 1991. Her pioneering work in printmaking showed how commercial lithography and silkscreen printing had the potential to become fine art forms. Over time, her interests, always socially conscious, focused more and more on the natural world as she moved from representation to abstraction and back again as easily as she could ride a horse (while studying in Europe she was a trick bareback rider in a Parisian circus). Olds has been the subject of critical essays on modern art and the women’s movement in art. Her work is found in the collections of The Brooklyn Museum; The Museum of Modern Art; The Hirshhorn Museum and Sculpture Garden; The Metropolitan Museum of Art; The Minneapolis Museum of Arts; the National Museum of American Art, Smithsonian Institution; and the Ransom Center. 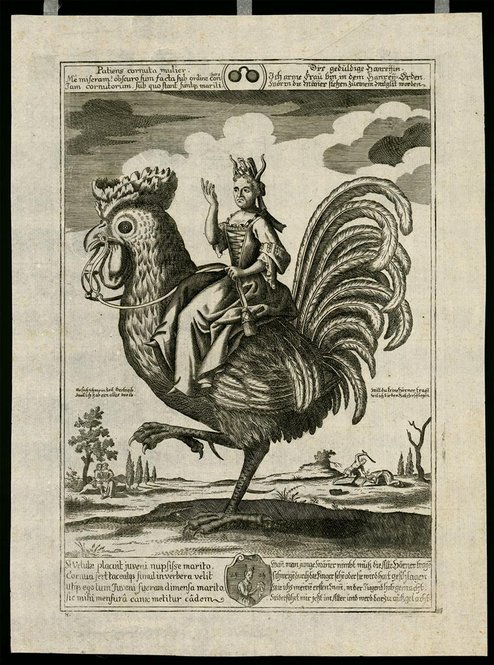 The Ransom Center’s online finding aid includes descriptive text derived from collector’s notes and a lengthy subject index. Each record in the finding aid also includes a link to the related image. ARTstor’s digital library provides advanced search functions and the ability to group selected images for PowerPoint display in classrooms, with images at high resolution.

The invention of the printing press in the fifteenth century and the resultant cultural phenomenon called “Popular Imagery” is a perfect example of cause and effect. Like printed words, unlimited reproductions of images helped bring about the development of a new visual language in early European society and a burgeoning cultural renaissance. The broad scope of the collection, whose origins include nine European countries, illustrate this fact. Prints make up the bulk of the popular imagery collection, with 686 intaglios (including 17 mezzotints), 115 woodcuts, one wood engraving, and six lithographs. Researchers will find an abundance of subjects, from political satire on kings, rulers, revolution, and war to social satire on gender, marriage, and domestic life; from religious studies and their allegorical themes on vice and virtue to numerous motifs on “The Ages of Man,” and “The Dance Macabre” or “Dance of Death.” Great moments in science and technology are visually well-represented in the collection, as are entertaining designs for buildings, board games, and signs of the Zodiac.

While some of the works in this collection were created anonymously—often to protect the creator from ridicule, incarceration, or worse—the collection also includes imagery by many significant artists of the time period, including Albrecht Dürer (1471–1528), Hans Holbein (1497–1543) and Lucas Cranach, the Younger (1515–1586).