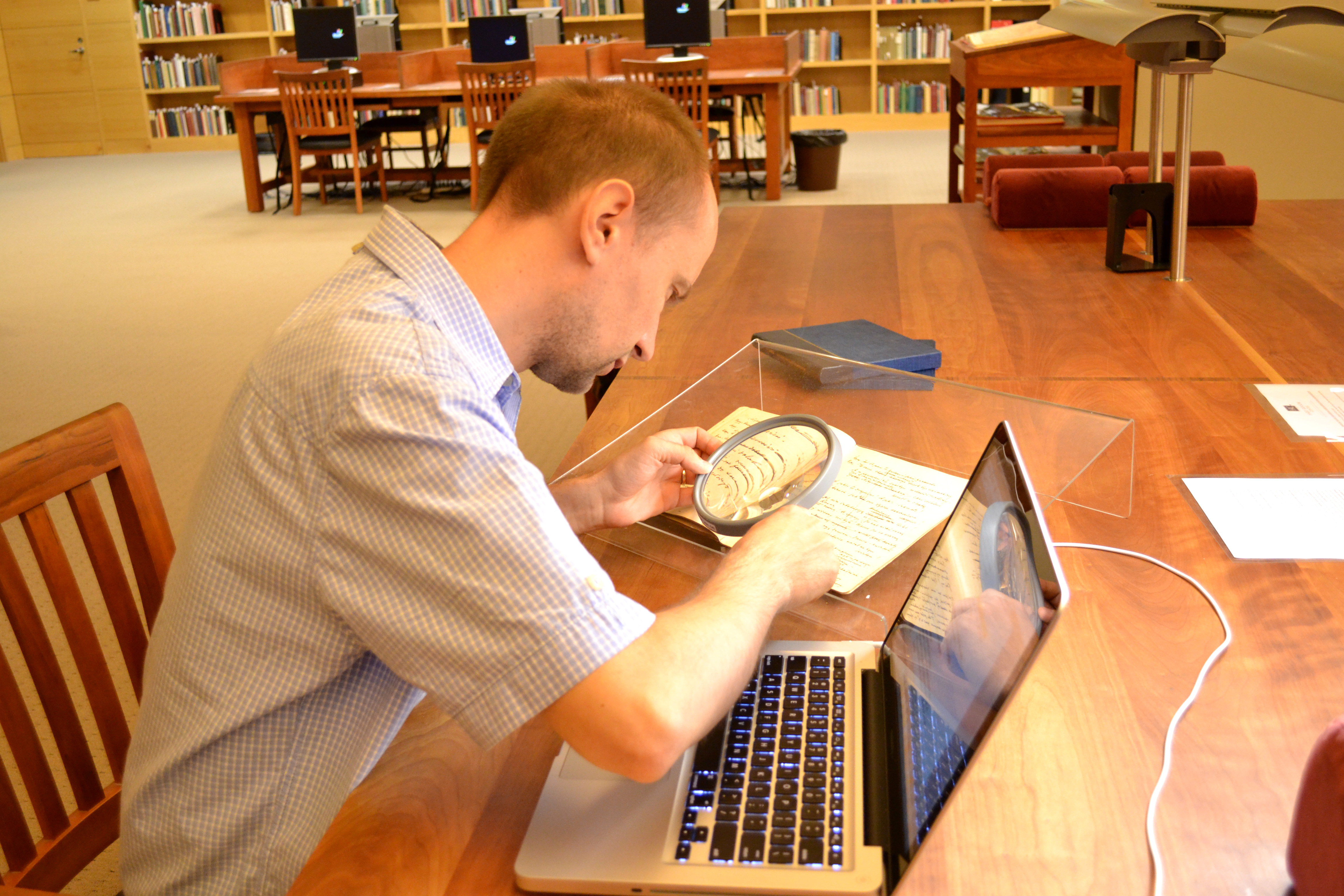 Dariusz Pachocki, an assistant professor in Polish studies at John Paul II Catholic University of Lublin in Poland, worked in the Bolesław Leśmian papers at the Ransom Center in 2013. While here, he investigated the provenance of the collection and pieced together the long journey the papers took before their arrival at the Ransom Center in 1970, and below, he writes about that journey. Pachocki’s research was supported by the Edwin Gale Fellowship.

Manuscripts of many outstanding writers are stored in the collections of the Harry Ransom Center, and there are even archival materials from writers who never visited the United States and never wrote anything in English. For example, the Ransom Center has a great collection of manuscripts by Polish writer Bolesław Leśmian. How did the manuscripts of one of Poland’s greatest writers end up in the United States? This is the short story of a long and complex tale that brought these manuscripts to Texas.

Bolesław Leśmian (1877–1937) came from an assimilated family of Jewish intelligentsia. In importance, he ranks with other such poets of his time as T. S. Eliot or Rainer Maria Rilke. However, his work was appreciated only at the end of his life. Scholars of literature have described him as a great poet with a brilliant style of language, which he used skillfully in his creation of numerous neologisms. A man of great culture, he combined old philosophies with modern skepticism. He wrote fables, essays, and dramas, among other things, but poetry was the most important. Though he published only three books of poems during his lifetime, he influenced the history of Polish literature. Few manuscripts have been preserved, so the collection at the Ransom Center is very important for Polish culture.

The journey of the manuscripts begins in 1944 during the Warsaw Rising, a rebellion during World War II that was violently supressed by Nazi Germany. Many civilians, including Leśmian’s wife Zofia Chylińska and his daughter Maria, left the city because of military action. Leśmian had died two years before the outbreak of World War II, and so his wife and daughter were forced to manage on their own during the occupation. Before the women left the city, Chylińska divided his literary output into two parts and placed them in suitcases. The first included manuscripts of literary works that had been published, and the other contained manuscripts that were unknown and unpublished. The women did not know what their fate would be, and so they took with them only the most necessary and most valuable items. They could not take both suitcases, so they decided to leave the suitcase with published manuscripts in the basement of their acquaintance. Leśmian’s daughter Maria recalled these events after the war in her memoir:

“Notebooks in a black cover made from oilcloth. Lost manuscripts. It was impossible to save them all and take from the burning house. Mother was weak from despair. She could not lift a leaf from the ground. But Warsaw was burning. And despite this I carried bulging suitcase on Rakowiecka Street to the house which was not in flames. It was opposite to the fortress improvised by Germans. There, on the ground floor, lived our friend. Her surname was Czarnocka. We placed the manuscripts in her basement […]. These were published literary works.”

The second half of Leśmian’s works travelled with his family on a long and dangerous journey:

A few essays, unfinished poems had a similar fate as their owners, they travelled with us to Mauthausen concentration camp. They, through work camps, got to another hemisphere. I remember when I was carrying them. I was exhausted, with terrible pain of heart, after three days and nights of trip with a sealed train. We were surrounded by soldiers with torches. We climbed the hill, we carried valuable bundle with difficulty, in the light of these torches whose scrappy, fiery flames reflected darkness of the night. It was in August 1944.

The German Mauthausen concentration camp was built in Austrian territory. As in other concentration camps, people from across Europe were exterminated, and inmates who survived lived in unimaginable conditions. The most important thing was to survive, and in such circumstances, bread outranks manuscripts. However, Leśmian’s wife and daughter did not part with the manuscripts. They protected them as their most valuable treasure.

After a few months of appalling living conditions, they were freed by the American Army in May 1945. Starving and ailing, they made it to Italy with the aid of the International Red Cross, and they decided not to return to Poland because the Soviet Army was not only a liberator but also an occupier.

After World War II, Poland was under the influence of the Soviet Union. It had been placed within the communist bloc, where thousands of soldiers maintained order. Consequently, many members of the intelligentsia—writers, artists, or soldiers, and Leśmian’s family—chose not to return to communist Poland. After leaving Italy, Chylińska and Maria Leśmian lived for some time in London, where they published some of the saved manuscripts. Soon after that, they emigrated to Argentina and settled in the suburbs of Buenos Aires. While it seemed like the women and manuscripts would be safe there, both women had problems finding jobs, and they experienced poverty and suffered from illnesses. Also, despite being treated with care and reverence, the manuscripts were deteriorating because of the damp climate in Argentina.

The women could not afford professional conservation, and so they made a dramatic decision to sell the materials both to save themselves from starvation and to preserve the manuscripts. Polish intelligentsia emigrants and people connected with Polish culture were interested in the materials, but no agreement could be reached with Polish institutions, even though Chylińska’s health and the condition of the manuscripts were worsening.

Finally, a Polish antiquarian bookseller from New York, Aleksander Janta-Połczyński, was travelling throughout Argentina, met with Leśmian’s family, and was interested the manuscripts. He searched for an institution that could purchase the manuscripts and preserve them properly. When that proved impossible, he decided to pay for them with his own funds in 1967. Sadly, Leśmian’s wife had died three years earlier.

The antiquarian bookseller came to an agreement with the then-Humanities Research Center (now the Ransom Center). House of El Dieff auction house brokered the transaction, and after a long journey across three continents, the manuscripts arrived in Austin in 1970.

This collection of manuscripts includes seven literary works that are very interesting. While there is evidence that the family rescued more manuscripts from burning Warsaw, a considerable part of them seem to have been lost. However, the manuscripts that survived are perfectly protected and available to scholars interested in the literary output of Leśmian. The Ransom Center’s collection is now the largest collection of manuscripts of Bolesław Leśmian in the world. However, that could change one day if the other suitcase that was hidden in the neighbor’s basement resurfaces. The building survived bombardment and all military actions, but the suitcase has never been found.