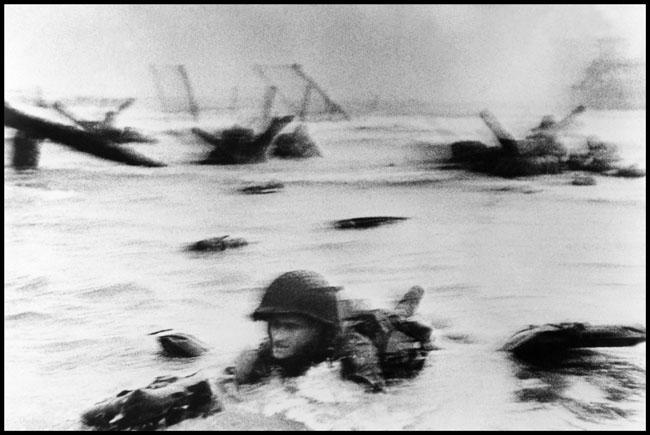 Robert Capa (1913–1954), proclaimed “The Greatest War Photographer in the World” by the Picture Post in 1938, famously created some of the only surviving photographs of the Allied Invasion of Normandy in 1944. When his rolls of film arrived for development at the Life magazine office in London, a darkroom assistant was told to rush the processing to get the photographs to New York for publication in the next issue. The assistant placed the newly developed film in a drying cabinet on high heat, melting the emulsion on three of the four rolls. Luckily, ten images from the fourth roll were not entirely destroyed and appeared only “slightly out of focus,” the title Capa would cleverly give to his memoir in 1947. The blurred photographs became known for their sense of drama and immediacy, as Life’s story captions falsely attributed the blur to Capa’s trembling hands.

In the Ransom Center’s exhibition Radical Transformation: Magnum Photos into the Digital Age, on view through January 5, this photograph is presented in a way that shows both the front and back of the print. Visitors are able to see the stamps, inscriptions, reference numbers, and notes that trace the trajectory of this individual press print, one of nearly 200,000 recently donated to the Ransom Center. Also on view are four additional photographs from the larger group that constituted Capa’s D-Day picture story, facsimile versions of his handwritten captions submitted to Life magazine, and copies of the June 19, 1944 issue of Life showing how the story was published.

Three years later, Capa and his close friends Henri Cartier-Bresson, George Rodger, and David “Chim” Seymour founded the Magnum Photos agency in the penthouse restaurant of the Museum of Modern Art in New York. (Photographer William Vandivert also joined the group but left after about a year.) These were photographers who had experienced a catastrophic war and were united by their belief in a shared obligation to be the historians of their own causes. Magnum Photos continues to be fully owned and supported by its members, numbering over 100 since its founding in 1947, with offices in New York, Paris, London, and Tokyo.