The 12th Academy Awards ceremony was held on February 29, 1940, at the Ambassador Hotel in Los Angeles, with Bob Hope hosting. Gone With The Wind was nominated for 13 awards and won for END_OF_DOCUMENT_TOKEN_TO_BE_REPLACED 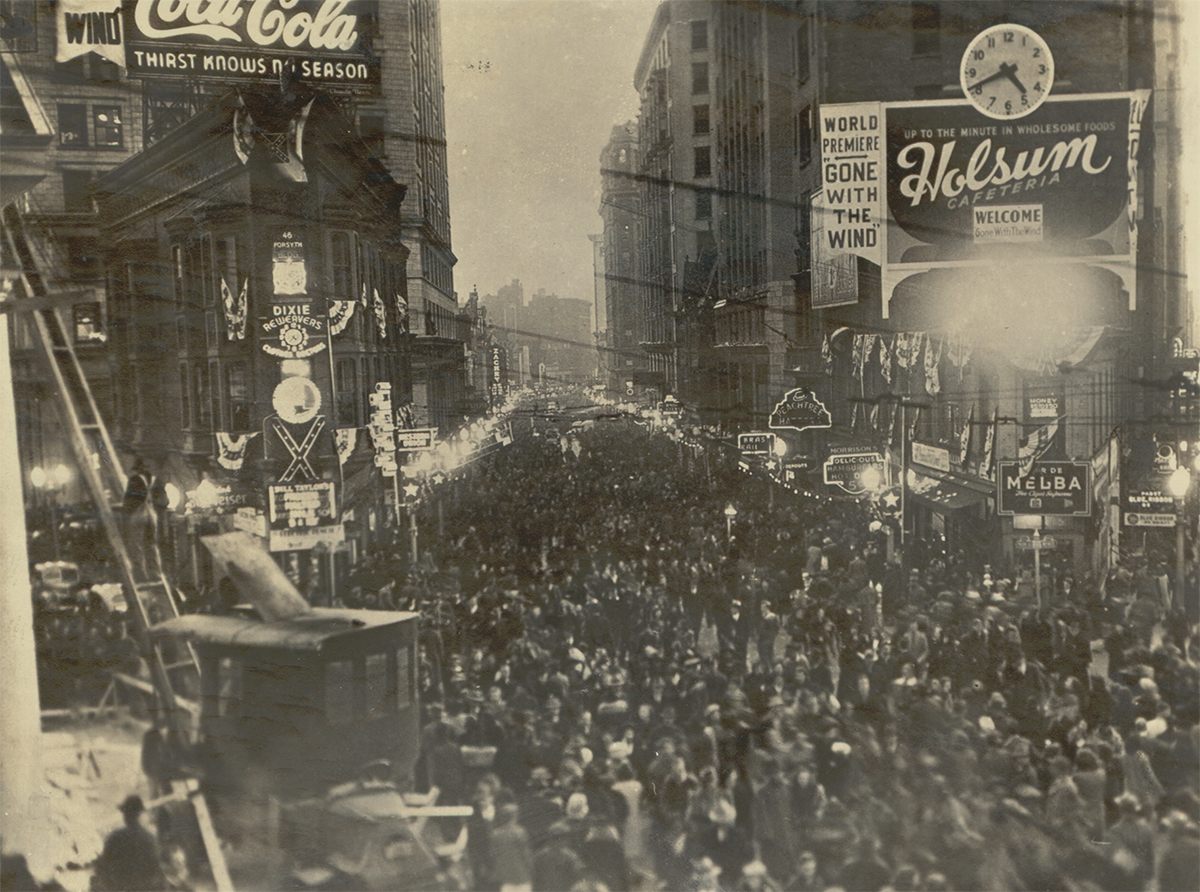 The world premiere of Gone With The Wind in Atlanta was the culmination of months of anxious and complicated negotiations between producer David O. Selznick, distributor MGM, their staffs, and the city of Atlanta. Bernstein offers an in-depth look at the challenges of staging the 1939 premiere in a segregated southern city in his lecture, held in conjunction with the exhibition The Making of Gone With The Wind.

In the below Q&A, Bernstein discusses the enduring legacy of the iconic film, the thankless staff members who worked behind the scenes to organize the Atlanta premiere, and surprises he found in the David O. Selznick collection at the Ransom Center.

The Bernstein program is free and open to the public. Seating is first-come, first-served, and doors open at 6:30 p.m.

December marks the 75th anniversary of the premiere of Gone With The Wind in Atlanta. Why, all these years later, does this film evoke such a strong response from audiences?

The hold Gone With The Wind has over certain audiences is extraordinary. I’ve known people who moved to Atlanta because of it, and I know people here in Atlanta take great offense if one mounts any criticism of it. There are many reasons for it.

Some are obvious: its landmark status as an Academy Award winner and one of the highest grossing films, adjusted for inflation, in Hollywood history. There is its technical achievement as an extremely well made and spectacular film in one of Hollywood’s strongest years—it’s simply a great pleasure to watch. There are the terrific casting and performances by the leads and the secondary cast.

But the film has such a hold over audiences for other reasons as well. The film’s ambivalent treatment of Scarlett is one—she is a modern, brash woman in a genteel society who flouts convention to get what she wants however she can, with little introspection. The film admires her energy and drive, but simultaneously mocks her selfishness, her pettiness, and her pretensions, largely through Rhett Butler’s witty and clear-eyed deflation of her airs. She’s a classic melodramatic heroine, one who makes so many mistakes in her life and loves and ultimately comes to realize the opportunities she has missed.

Its deepest appeal, I believe, resides in its portrayal of the tremendous loss and suffering Scarlett endures—the film was a source of inspiration to women struggling through the Great Depression and then World War II across the globe. That portrait endures, even as it is woven into the less-than-progressive racial politics typical of the plantation genre of the 1930 (an area where we should note the film is less offensive than Margaret Mitchell’s novel).

You’ve said that the Gone With The Wind premiere in Atlanta was the high point in the city’s history. Is there any comparable event today that would convey just how big of deal this was to Atlantans at that time?

The premiere happened in Atlanta because this is where Margaret Mitchell lived and wrote the novel. The 1996 Olympics are the only phenomenon that equals it. In both cases, Atlanta felt the eyes of the world were upon it. In 1939, a reporter ranked the Gone With The Wind premiere greater than Charles Lindbergh’s visit to the city.

You spent some time in the Ransom Center’s David O. Selznick archive researching the premiere in Atlanta. What surprises did you find?

The Ransom Center has always been one of my favorite places to undertake research. The Selznick collection is exceptional, and I found many surprises. One might have predicted the amount of work and energy that went into staging the premiere, but it was still extraordinary to see the details that had to be attended to.  Selznick let his staff plan away, swooping in only at the end to question and in some cases criticize their work. Another big surprise was a letter I found from one Robert Willis, a member of a theater club on one of Atlanta’s black college campuses; this student invited the Selznick group to visit the black side of the city. No one to my knowledge had discussed this aspect of the premiere. I had read Selznick’s last-minute memos about giving Hattie McDaniel a page in the souvenir program for the premiere, but never knew what inspired that. Overall, the most delightful surprise to me was to see the extent to which Margaret Mitchell had Selznick wrapped around her finger. The dynamic there is extremely amusing.

Selznick and his staff worked for months to plan and execute the premiere in Atlanta. Can you talk about why expectations were so high for the film in Atlanta?

As I mentioned, Selznick was not really involved in the plans. He was far too busy attending to the manifold details involved in Gone With the Wind‘s post-production so that the film would be finished in time for the Atlanta premiere. He delegated the overwhelming majority of the work to his story editor, Kay Brown, who worked with Atlantans as well as the MGM distribution executives in charge of the premiere. Selznick fretted on the sidelines, gave Brown some ideas, but his attention was elsewhere until late November.

As for high expectations, in the 1930s, the white citizens of Atlanta craved attention and validation, partly because of the city’s destruction during the Civil War, and partly because of its boosterism. It was a growing city that loomed large regionally, but not nationally.  To have one of its residents write a Pulitzer Prize-winning international bestseller stirred a wave of civic pride. Atlanta also loved the movies as much as any city in the 1930s, but not many films were set in Georgia. So Georgians were thrilled at the prospect of seeing an epic production that was sympathetic to the state’s ordeal during the Civil War and afterwards. Southerners in general felt Hollywood never represented them fairly—here was a film that promised to do so. Add to that the idea that Clark Gable and Vivien Leigh would be on the streets of the city for the premiere and you can see why white Atlantans—officials, business leaders, civic leaders and ordinary citizens—went crazy over this. White Atlantans, that is. Black Atlanta likewise gloried in the presence of the stars, but some leaders questioned the hoopla and the film itself.

Can you talk about what role Kay Brown played in organizing the premiere and smoothing relations between Selznick International Pictures and Gone With The Wind author Margaret Mitchell?

Since Brown was the one who found the Gone With The Wind manuscript and persuaded a reluctant Selznick to option the novel, it seems appropriate that she would handle the Atlanta event. It was difficult, thankless work involving diplomacy and a lot of keeping her thoughts to herself. She is the real hero of this story. Like so much else that Selznick undertook, the Atlanta premiere could not have happened, or worked, without her.  Brown completely charmed the Atlantans, and especially Margaret Mitchell. Selznick needed Mitchell’s good will—if she criticized his film, its box office grosses could have been diminished. So there Brown was, in the field, and communicating back to Selznick about how things were progressing, and playfully letting him now that she was not enjoying it. She didn’t even stay for the Atlanta festivities; she had to head up to Manhattan to plan the opening there a few days after Atlanta. She was quite happy to miss them.

There were controversies over race with the premiere in Atlanta, as producers deemed it unsafe for Hattie McDaniel to attend the event and African American audiences were largely excluded from festivities taking place around the city. Can you talk about how Selznick and his staff approached these issues?

The Loews’ Grand where the premiere took place did not have segregated seating. Black Atlantans waited four months till April to see it in a “colored” theater. Selznick recognized that his film could invite strong attendance among African Americans, and even thought that if black cast members came to Atlanta, they could help promote the film in black neighborhoods.  Kay Brown, like the MGM distribution and advertising executives who planned the premiere, relied heavily on certain Atlantans for advice on many issues, including this one. The “Hollywoodians” knew they were way out of their depth on the “delicate” issue of race relations in the South. Most simply, they followed the advice the Atlantans gave them, which was not to include Hattie McDaniel in the festivities or the souvenir book. Regarding the latter, the rationale was that McDaniel’s photo in the program might give some malcontent a basis for criticism of the film and the premiere, something they wanted to avoid. Besides, as guests of the city, the Hollywood folks thought they should follow their hosts’ suggestions. Kay Brown put it well: “…while it was unfortunate to exclude Mammy, it was the wisest policy.”  They made an unsurprising choice in 1939.

Image: Crowds gather for the parade in Atlanta for the premiere of Gone With The Wind.