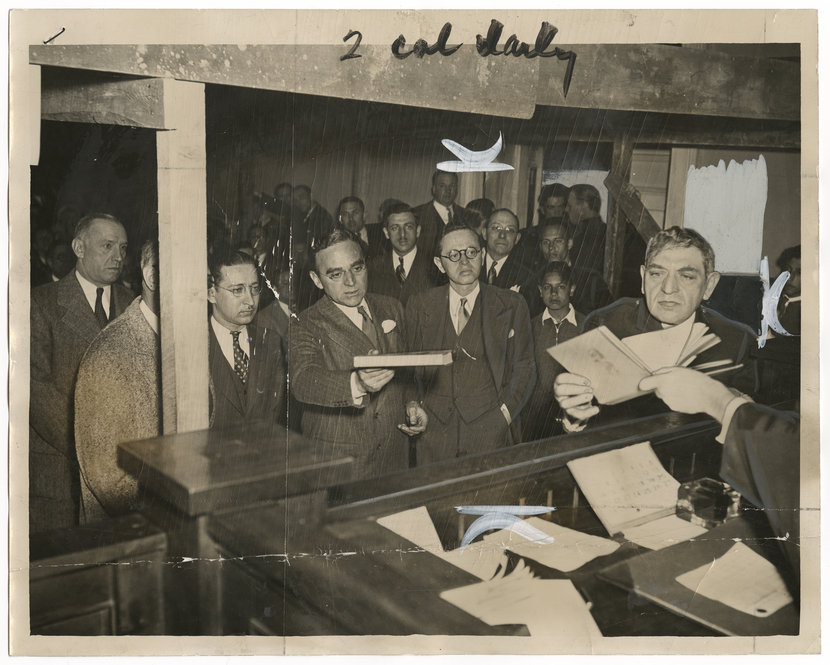 Through a generous grant from the National Endowment for the Humanities, a team of archivists and student interns has been working to organize and catalog the papers of attorney Morris Leopold Ernst since September 2009. The collection is now open for research, and a finding aid is available online.

Morris Leopold Ernst (1888–1976), who earned his law degree 100 years ago, may not yet be a household name, but his legal career has had a lasting impact on American society. Ernst dealt primarily with civil liberties cases in a variety of areas, including censorship, obscenity, and first amendment rights. In addition to his busy legal career, he was a prolific writer, authoring more than 30 books and hundreds of articles, essays, and short works on legal topics and other social issues like big business and divorce.

Ernst is probably best known for his work in literary censorship cases. His influential fights include the defense of Radclyffe Hall’s The Well of Loneliness, Arthur Schnitzler’s Casanova’s Homecoming, and most famously, James Joyce’s Ulysses.

Though the majority of Ernst’s work took place in the early and mid-twentieth century, as our team of archivists sifted through his papers and processed the collection, we couldn’t help noticing how timely the collection seemed. Over and over again the subjects we read about in Ernst’s archive were echoed by stories in the recent news.

The case United States v. One Book Entitled Ulysses by James Joyce, which Ernst and his colleagues carefully orchestrated, won Ernst much fame and set a precedent for arguing and trying “objectionable” literature. Banned in the United States for more than a decade before Ernst won the case in 1933, Joyce’s masterpiece has had to overcome other more recent hurdles. In 2010 the work was in the news when Apple tried to censor a graphic novel version by Rob Berry and Josh Levitas. Before allowing the Ulysses comic to appear as an electronic book for the iPad, Apple requested that the illustrators remove all nudity from their images. Apple eventually rescinded its demand and allowed the original illustrations to appear.

In the 1930s, Ernst was also a prominent figure in the early birth control movement defending the Birth Control Federation of America and the Clinical Research Bureau, predecessors of the Planned Parenthood Federation of America. As these organizations printed and distributed educational materials on reproduction and contraception, they were charged with obscenity. In cases such as United States v. One Package of Japanese Pessaries, Ernst exonerated the movement’s leaders from indecency and in so doing, helped promote women’s rights and the freedom of choice. Contraception and women’s rights have continued to be newsworthy topics.

Ernst was also well known for his work with labor unions, famously defending first amendment rights in Hague, Mayor, et al. v. Committee for Industrial Organization et al. This conflict arose in the 1930s when Jersey City, N.J. mayor Frank Hague tried to suppress many of the Committee for Industrial Organization’s (CIO) activities and decreed by city ordinance that laborers could not assemble in public. The case was appealed to the Supreme Court where the workers’ rights were upheld. Though Ernst won that case in 1939, politicians and labor unions have often been at odds with each other. For example, beginning in February 2011 headlines were populated with reports about Wisconsin Governor Scott Walker’s attempts to curtail union bargaining rights. The AFL-CIO represented workers in these disagreements as well.

Ernst published his book Too Big in 1940, one of the many books he wrote. The title is echoed by the phrase “too big to fail,” with which we all are familiar, as it has been frequently used in the media since the market crash in 2008. Monopolies and the danger of big business were of real concern to Ernst, and he wrote about it not only in that volume, but in numerous magazine articles.

Censorship, birth control, labor unions, and monopolies were only a few of Ernst’s many interests. As a tireless worker he involved himself in many other issues, such as reducing postage rates for books and promoting literacy around the world. His papers provide insight into his legal practice and writing career and could also provide a new perspective on issues in contemporary society.