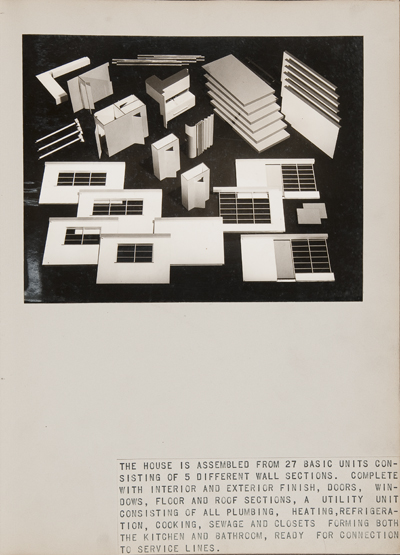 By the end of the 1930s, Depression-weary Americans were confronted with a housing shortage and skyrocketing prices. Norman Bel Geddes, perpetually optimistic, viewed the precarious geopolitical climate as a ripe opportunity to reshape domestic architecture. With a housing crisis, economic depression, and looming entrance into a world war, Bel Geddes believed Americans faced a defining moment in which they could forge “new beginnings.”

In 1939, Bel Geddes was commissioned by the Housing Corporation of America (HCA) to design and develop an affordable, prefabricated single–family dwelling. By the time of completion in 1941, Bel Geddes’s mass–produced house model included 27 separate building modules complete with doors, windows, utility units, and the kitchen and bathroom, “ready for connection to service lines.” The low–cost prefabricated panel system provided an economic alternative to traditional domestic building techniques.

To meet the needs of low–income families, each four–room home was to be erected for a cost of $2,500 under a “controlled co-operative” system. Licensed by the HCA, the co-operative system would provide former Works Progress Administration laborers with salaries and shares, thus keeping thousands of Americans off of government assistance. Bel Geddes sought to modernize the assembly and marketing of houses in anticipation of a postwar housing crisis.

Although the modular home project was never realized, Bel Geddes’s prefabricated dwelling system displays his ingenuity not only in building techniques but also in his promotional strategies. As a part of Revere Copper and Brass’s “Better Living Campaign” of 1941, Bel Geddes’s prefabricated home occupied full-page advertisements in the Saturday Evening Post. By 1945 the Revere Copper and Brass Company had distributed more than 800,000 copies of a 12-page booklet describing Bel Geddes’s plan for “tomorrow’s homes for the many.”

Bel Geddes had explored ways to effectively configure space into cost-effective designs since the late 1930s. Ultimately, his interest in prefabrication waned after a proposed prefabricated “Expand-a-House” franchise in the mid-1950s failed to launch.

“Unassembled Model of Bel Geddes’s Prefabricated House” is on view in the exhibition I Have Seen the Future: Norman Bel Geddes Designs America, which runs through January 6.