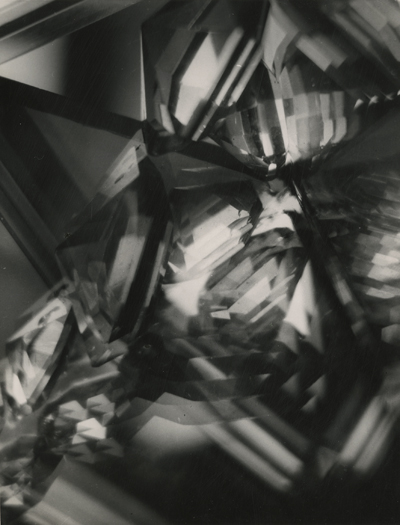 Although almost a century separates Alvin Langdon Coburn’s Vortograph (1917) and Barry Stone’s Sky 3099 (2012), Stone still finds parallels between the works. It is this connection between old and new that informs the Ransom Center’s current exhibition, Contemporary Photographic Practice and the Archive.

Created in conjunction with the Lakes Were Rivers collective, an Austin-based group of artists working in photography and video, the exhibition highlights members’ works that were influenced in some way by the Ransom Center. Approximately 50 new works are displayed alongside Ransom Center collection materials chosen by the artists. The pairings illustrate how archives and cultural collections stimulate new ideas and creative acts.

Widely acknowledged as the first consciously created abstract photographs, Coburn’s vortographs were taken using a kaleidoscope-like instrument that fit over the lens of a camera to reflect and fracture the image. Their name comes from the term “Vorticist,” which describes an avant-garde British artistic and literary movement spearheaded by Wyndham Lewis and influenced by Cubism.

In many ways, Coburn’s earlier technical photographic experiments mirror Stone’s current work—black-and-white digital captures of landscapes in which Stone has altered the image file’s code or machine language in a text-editing program. This process, called databending, creates visual hiccups within the otherwise unaltered image. Stone’s Sky 3099 provides an example of the technique, billowing clouds interrupted by swaths of visual static. As the artist notes, “The noise, therefore, becomes more like the signal. The anomaly or glitch is assimilated into the image and reveals not only the methods of its assembly but also a glimpse of new perceptual possibilities.”

Both Sky 3099 and Vortograph are on display through August 4. On July 18, the artists of Lakes Were Rivers will discuss their work at 7 p.m. in the galleries.