The Student Activity Center (SAC) earned LEED Gold Certification from the U.S. Green Building Council in May. The SAC was honored with the Golden Trowel Award, along with P&S Masonry, Overland Partners and SpawGlass from the Central Texas Masonry Contractors Association, and is now competing for a State of Texas Golden Trowel. The SAC also received the Facility Design Award of Excellence. 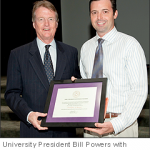 Chris Burnett, Recreational Sports, was named one of two Outstanding Supervisor Recipients on campus at The President’s Staff Awards ceremony.

Solitaire Lind, Don Ates, and Gaylee Horton, Housing and Food Service, are the most recent recipients of the “Hoelting Team Player Award.”

Dr. Sylvia Chen, CHMC, recently served as one of two facilitators for the Association of International Educators webinar on “International Student Adjustment,” with 1,300 + participants from 172 sites in the US, Canada and Colombia. 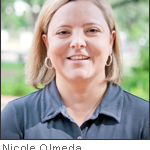