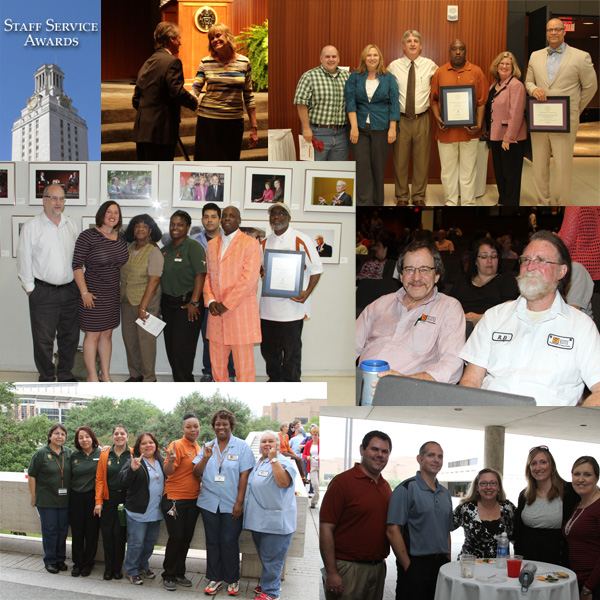 75 staff members from across the Division were honored during the President’s Staff Awards ceremony on April 23 for their years of service to The University of Texas at Austin. All told, they account for a combined 1,300 years of service! A full list of recipients is below and you can view more photos from the ceremony here.

Tracy Brzozowski, Ericka Holmes, and Luke Kilma, University Health Services, all received exceptional praise from their co-workers this month for going above and beyond the call of duty in delivering outstanding customer service.

Sharon Justice, former Dean of Students, received a shout out in a Daily Texan letter to the editor following the announcement of an endowed scholarship established in her name.

Andy Smith, University Unions, was the focus of a heart felt letter to the editor in The Daily Texan entitled “Farewell, Andy.” It was written by alum and former SEC President Matt Hardigree.

Gale Stuart, Office of the Vice President for Student Affairs, was welcomed as an honorary member of the Senate of College Councils during their April 18 General Assembly Meeting. They recognized Stuart, Director of Assessment, as a consistent resource to the campus community, including her work with the Student Experience in the Research University (SERU) survey and multiple assessment projects with Senate leadership.

… the Building Services staff in San Jacinto Residence Hall. ”Since April was such a busy month of meetings, Housing and Food Service thanks our fine staff for doing the impossible to make so many big events such a success. We especially thank them for coming out at night to change from banquet to parliament style set-up for a 6 a.m. event. We received a wonderful thank you from Texas Parents for our efforts in making their spring meeting such a success.”