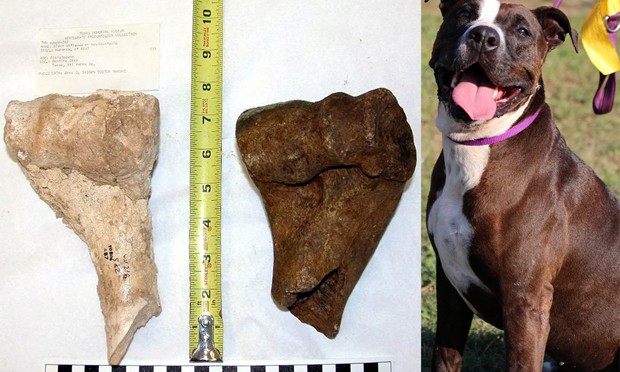 Diane Ruetz and I have been volunteering at the Pflugerville Animal Shelter for about seven months now.  As ‘dog walkers’ we’ve come to know the various quirks and distinct personalities of the long-term shelter dogs pretty well.  Recently, one of the dogs who had been at the shelter for more than a year and who was often overlooked by visitors, was on a walk with a volunteer.  Shelby, a sweet and playful mixed-breed dog, has a fondness for playing fetch in the water.  No matter how small the pebble you throw into the creek for her to retrieve, she would consistently come bounding out with large rocks.  One day she brought up something a lot more interesting than a rock.  Read about Shelby’s ‘find’ and how the Texas Archeological Research Laboratory contributed to the story…and, we like to think, to her adoption by a loving family.

The below information was provided by TARL NAGPRA Specialist, Kerri Wilhelm, to Pflugerville Pets Alive following the discovery of the bone by Shelby.  PPA hoped that the discovery, and the prehistoric perspective attributed to the find by TARL staff, might help to inspire some positive exposure for Shelby.  They were right!