Native peoples in Texas used a variety of instruments to create sounds and music throughout prehistory and into more recent times. Among TARL’s vast collections are a number of unusual artifacts likely used during rituals, ceremonies, and other events. Based on the contexts in which the instruments were found, many were used in burial rites. Ethnographic accounts provide additional insights about other circumstances in which similar instruments were played.

Crafted of wood, clay, bone, and other natural materials, the instruments’ design and construction provide clues to the powerful range of sounds they emitted. We can imagine the shrill notes of a flute or whistle, the eerily grating noise of a rasp, the quivering beats of a rattle, and hollow rhythms of a skin-covered drum. These otherworldly sounds accompanied shaman’s chants and set the pace for dancers and processionalists.

Engraved whooping crane whistle (top) and more than 350 black drum teeth found in a cluster within a small circular area. The teeth appear to have been confined within a circular container, such as a gourd, and may represent a rattle. These items were recovered from the grave of two juveniles at the Mitchell Ridge site. Photo by Robert Ricklis. TARL Collections. (Click to enlarge for more detail.)

Among the more fascinating music-related artifacts at TARL are 11 bird bone whistles excavated from Late Prehistoric and early Historic period burials at the Mitchell Ridge site near Galveston. All are made from the ulna, or lower wing bones, of the whooping crane (Grus Americana). The bones are hollow with very thin walls, making them good candidates for modification into wind instruments. Whistles have a single air hole, rather than several air holes, distinguishing them from flutes. According to archeologist Robert Ricklis, who investigated and reported on the site, several of the specimens have plugs of asphaltum, a natural tar-like substance emitted from oil seepages beneath the Gulf of Mexico, which partially cover and narrow the air holes. This feature served to control the air flow and cause the whistling sound when the instrument was blown. Four of the whistles are decorated with finely engraved lines in geometric patterns. Similarly engraved whistles made of whooping crane and heron ulna have been found in Louisiana. 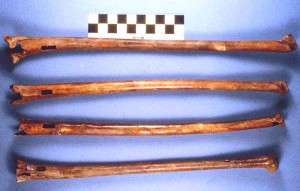 These undecorated whooping crane whistles were placed in the grave of a young man, 18-20 years of age, at Mitchell Ridge. Note the rectangular air hole cut into each whistle. Photo by Bob Ricklis. TARL Collections.

Reed flute from the Perry Calk site, a rockshelter situated high above the Rio Grande in southwest Texas. Unlike whistles, flutes have more than one air hole. The cane-like common reed from which the instrument was made grows in abundance along streams and rivers and was used for a variety of purposes. Photo by Monica Trejo and Matt Peeples (AMIS 2794b). TARL Collections.

Artifacts interpreted as rattles are rarely found intact. In some cases, the enclosing container, such as a gourd, deteriorated over time, leaving only the rattle contents—small, regular items such as pebbles or clay balls that would have made an impressive sound when the container was shaken. Prime examples of this sort of extrapolated evidence come from the Mitchell Ridge site where four tight clusters of black drum teeth—interpreted as the contents of rattles—were found in burials. More rarely, rattles are recovered intact or nearly so. At the Caplen Mound cemetery site on the Bolivar Peninsula, a decorated turtle carapace was found laying in the burial of an infant. Drill holes in the shape of a “U” suggest the carapace served as a breast plate or rattle. The presence of several glass trade beads indicates the infant burial occurred in the early historic time period. At other south Texas burial sites such as Morhiss Mound, deer antlers and modified antler tips were found in burials, and these have been interpreted as rattles or tinklers, the latter perhaps appended to the clothing of the individual. 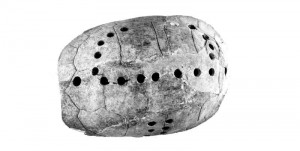 Tortoise shell rattle found in a child’s grave at Caplen Mound on the Bolivar Peninsula about 25 miles northeast of the present-day city of Galveston. The small shell, decorated with a series of drilled holes and containing several small pebbles, was found in the neck area of the child, and may have been worn suspended from a cord. TARL Archives.

In addition to burial ceremonies, music and rhythmic sounds were important in other rituals. The Spanish priest Espinosa describes a healing ritual among the Caddo in which flutes and rasps were used. To cure a patient, according to his early 1700s account, they make a large fire and “provide flutes and a feather fan. The instruments [palillos-rasps] are manufactured [sticks] with notches resembling a snake’s rattle. This palillo placed in a hollow bone upon a skin makes a noise nothing less than devilish.”

According to Caddo tribal historians, numerous types of instruments—rattles, drums, and flutes—were played during rituals and dances, and some of these rich traditions continue today among peoples of the Caddo Nation. 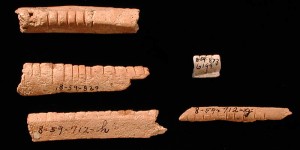 Marked with a series of carefully incised parallel notches, hollow bones such as these have been described as “tally bones,” or counting devices. More likely, they were rasps used as musical or ceremonial instruments. They were recovered from the Harrell Site (41YN1) in north central Texas.

This notched rasping stick from Conejo Shelter in the Lower Pecos region is made of mesquite wood. Photo by Monica Trejo and Matt Peeples (AMIS 23549).

Other historic accounts mention the use of musical instruments in battle and in hunting rituals. During a 1690s battle between the Cacaxtle Indians and the Spanish in what is now south Texas, an elderly Indian woman played a flute throughout, perhaps to buoy the spirits of the Cacaxtle warriors. As recorded by Spanish historian Juan Bautista Chapa, at the end of the battle more than 100 Indians lay dead and another 70 were taken captive. Noted Swiss-American ethnographer Albert Gatschet recorded peyote ceremonies associated with deer hunting among the Rio Grande Comecrudos. This ceremony was accompanied by music from drums and rattles and dancing from elaborately dressed shamans. Achieving a trance state through repetitive music, which typically involved rattles and chanting, was an important component of shamanic ceremonies.

Musical instruments played an important role in the rituals and spiritual life of native groups in the past. Witness accounts such as these help bring to life some of the mute artifacts in TARL Collections and provide colorful insights into how some of these fascinating instruments may have been used.
Learn more about sites mentioned in this entry: