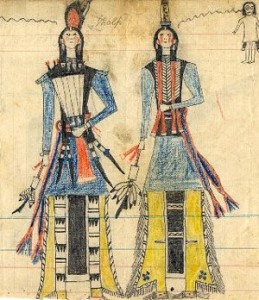 This richly detailed drawing from the Schild Ledger Book features two men, both carrying rattles and a fan and garbed in elaborate attire. Although a noted Plains Indian artist identified the figures as Kiowa dancers, the enigmatic German text written on the drawing reads, “Ollie Johnson daughter and grandson.” According to notes accompanying the ledger book when it was acquired by The University of Texas, Ollie Johnson was purported to be a Comanche woman who created the paintings. Labels such as these appear on most of the drawings, adding to the mystery of the book’s authorship. TARL Archives.

A new Spotlight feature on Texas Beyond History focuses on one of TARL’s most unusual collections. The Schild Ledger book comprises nearly 60 Plains Indian ledger drawings variously ascribed to the Kiowa, Cheyenne, Arapaho, and Comanche. Some are brilliant in color and detail, others mere pencil sketches that were never completed. Known as ledger drawings because of the paper on which they were drawn—typically ruled pages from account books acquired as a gift or through theft or trade—the art was created largely in the last third of the 19th century to portray heroic deeds, tribal traditions, and battles with U.S. soldiers and settlers as the Plains Indian way of life passed into history.

Much of what is known about the Schild Ledger Book raises questions—from the identity and tribal affiliation of the artist or artists who created the drawings, to the circumstances of the book coming into the possession of a purported Indian Agent from Fredericksburg, Texas, and ultimately to its being taken abroad to Germany.  In this Spotlight feature, we consider clues and possible answers and provide an online gallery of prime examples from the collection for researchers to examine further.

To read more and explore these drawings, see The Schild Ledger Book