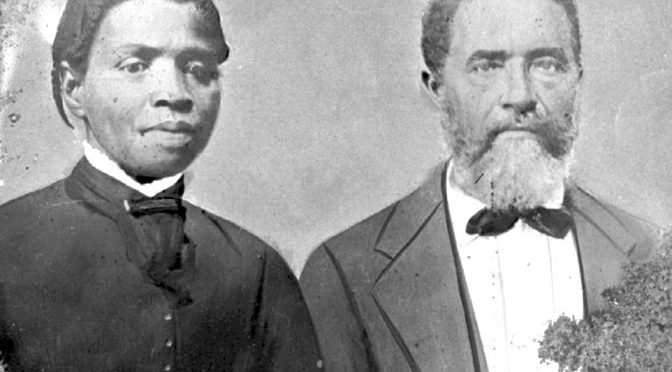 On June 19th, 1865, the news that slaves were free finally reached Texas. Every year, communities gather to celebrate the emancipation of slaves in Texas. This Juneteenth, we highlight an exceptional story of freedom that is featured on Texas Beyond History.

Through archeological investigations, you can read about Duval, the once thriving community of freed African-American slaves. This community was located in what is now the interchange of Loop 1 and Parmer Lane in north Austin. When a highway extension was planned near the interchange in the 1980s, TxDOT archeologists utilized old maps, records, and an aerial photo from 1937 to identify the location of a historic farmstead.

In Duval, freed slaves Rubin and Elizabeth Hancock purchased farmland where they raised their five children. Elizabeth and Rubin Hancock were both born into slavery in the 1840s in Tennessee and Alabama, respectively. Prior to the Emancipation Proclamation, the Hancocks, along with Rubin’s three brothers, all belonged to Judge John Hancock, a unionist who fiercely opposed secession despite his reliance on slave labor. Judge Hancock was even removed from office after being elected to the state legislature in 1860 for refusing to pledge allegiance to the Confederacy.

At the end of the Civil War in 1865, Rubin and his three brothers bought land north of Austin, possibly with the help of Judge Hancock. It was here that Elizabeth and Rubin established a productive community of African-American farmers complete with a church and school for their children. According to family members, Elizabeth and Rubin’s home was made of lumber, with two rooms under the main roof and a separate addition which contained the kitchen. Rubin’s granddaughter, Mable Walker Newton, remembers the two main rooms having large glass windows and wooden shutters. Water was hauled in from a well, cooking was done on a cast iron stove, and kerosene lanterns illuminated the log cabin. The family raised cows and pigs, grew cotton, and harvested a large garden. With the help of the A&NW railroad, beginning in 1881, surplus was transported and sold to local store owners in Austin.

The addition of the A&NW railroad also brought new families. The growing community came together at St. Stephen’s Missionary Baptist Church, where in addition to worship and other social gatherings, classes were taught. In the evenings, large social gatherings with neighbors, friends, and relatives could be expected. The children would find entertainment with marbles, baseball, and homemade cardboard dominoes. All of this was confirmed through intensive investigations and research, now available to the public on Texas Beyond History. The families of Duval achieved a level of success that most people of their time – African-American and Whites alike – did not. The Hancock brothers in particular were landowners and each worked their own farms. The brothers were all registered to vote, and each married and raised a family. While Elizabeth Hancock passed away in 1899, Rubin continued live and work on the farm into his sixties until his death in 1916. The Hancocks’ descendants continue to live in the Austin area today. Rubin’s three surviving children kept the farm until 1942 when the house was removed from the site.

By the time that TxDOT archeologists arrived to investigate the area, all that remained on the surface was a well, a chimney hearth, and sections of a fence and stone wall. Excavations at the farmstead revealed possible stone piers of the house, trash areas, along with scatters of artifacts. The 9,000+ artifacts provided archeologists with an idea of the farmstead layout and an insight in to day-to-day life on the farm. Excavated marbles show what sorts of games children enjoyed playing. Recovered items such as combs and buttons provide a visual of the local trends. A canine burial even lets it be known that people in Duval loved their furry companions just as much as modern Austinites. In addition to cultural remains, oral histories and archival information was gathered to better visualize the Hancock family and farm.

As TxDOT continues to work and build a safe and reliable transportation system, the Cultural Resources Management (CRM) program considers the impact of projects on archeological resources and historic properties like the Rubin Hancock Farmstead– resources we know can be important to communities across the state.

Learn more about the Rubin-Hancock Site:

One thought on “A Story of Freedom on Texas Beyond History, by Laura Cruzada, Lee Reissig, and Marisol Espino”