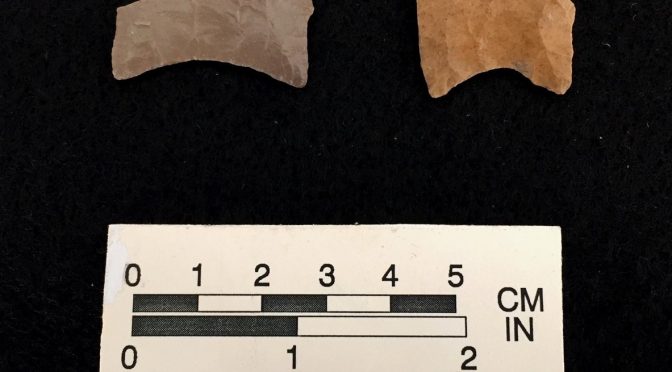 Wilson W. Crook, III, is a visiting researcher at TARL. This article is part of TARL’s September 2017 newsletter.

The Sam Houston Regional Library and Research Center in Liberty, Texas is currently in the process of renovating its entire museum display. A major component of their future exhibits will be the prehistory of Southeast Texas utilizing the extensive Andy Kyle Artifact Collection. The collection of prehistoric artifacts was a gift to the museum by the late Mr. Andy Kyle, long-time resident of Liberty County and avid avocational archeologist. The collection comprises well over 30,000 artifacts from 95 archeological sites from nine counties in Southeast Texas. These include sites in Liberty, Polk, Jasper, Sabine, Tyler, Hardin, Angelina, San Augustine, and Newton Counties. In early 2017, members of the Houston Archeological Society (HAS) were asked to assist the Sam Houston Regional Library’s project by going through the entire Andy Kyle Artifact Collection and identifying distinctive artifacts from each chronological period for the new display. A number of hitherto unrecorded discoveries were made during this process which will be the subject of a several future publications from the HAS. One of the more spectacular finds was the discovery of several diagnostic Clovis artifacts from the Wood Springs site (41LB15). The artifacts mark the first reported occurrence of Clovis people in Liberty County (Beaver and Meltzer 2007) and push the date for the first occupation of the area back to at least 13,000 years ago.

The Wood Springs site is located approximately 3 kilometers northwest of Liberty, Texas on the west side of a small stream known as Wood Springs Creek or Atascosito Springs. This stream is fed by several perennial springs and is a minor tributary of the Trinity River, which is located 0.8 km to the west. Occupational material at Wood Springs covers at least 0.2 Ha (0.5 acres) and possibly as much as 2 Ha (5 acres). Based on artifacts collected by Mr. Kyle, the Wood Springs site represents a long-term occupation which extends from the earliest Paleo-Indian period (Clovis) through the Late Prehistoric.

A total of 9 artifacts of probable Clovis affinity were identified in the Kyle Collection from the Wood Springs site. These include the bases of two fluted points (Figure 1), two large blades, two overshot flakes, two small (<50 mm) prismatic blades, and a side-scraper / perforator made from a broken blade. The artifacts have been studied in detail including physical measurements, high power microscopic examination, and trace element geochemical analysis using X-Ray Fluorescence (XRF). In addition, two fragments of proboscidean enamel were found in the collection which are believed to be part of a mastodon molar (Mammut sp.).

All nine of the lithic artifacts of probable Clovis affinity are made from high quality chert that is not native to the Southeast Texas area. The artifacts also display a strong yellow to yellow-orange fluorescence under both short and long-wave UV radiation which is characteristic of Edwards Plateau chert (Hofman et al. 1991; Hillsman 1992).

Measurement of the two blades using the comparative methodology developed by Collins (1999) and Collins and Lohse (2004) for the Gault project show the blades to be similar in terms of length, width, and thickness ratios to Clovis blades from the Timber Fawn site in Harris County (Crook et al. 2015) as well as blades from the Gault (41BL323) and Keven Davis (41NV659) sites.

Ongoing research is investigating the trace element geochemistry of the artifacts in an attempt to source the chert material. These efforts will also try and determine if there is a relationship between the Clovis occupation at Wood Springs and other Clovis sites in southeast Texas, notably the Timber Fawn site located 28 miles to the west in Harris County. The Wood Springs site, which is located only 0.4 miles from the Sam Houston Regional Library, is also being reinvestigated by the HAS to see if further artifacts of Clovis affinity can be recovered.