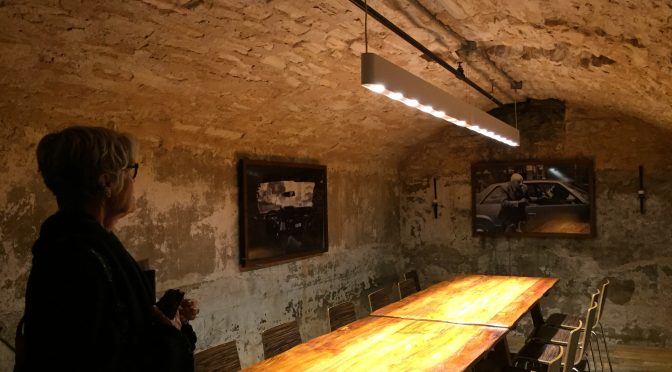 This month, TARL students, donors, and volunteers had a chance to visit downtown Austin and see the historic buildings and excavation areas uncovered during excavations of Austin’s Guy Town district in the 1990s. TARL Associate Director Jonathan Jarvis led the tour and talked about his experiences working on this project and the challenges of doing archeology in an urban environment. The massive archeological project covered four city blocks under what is now Austin’s City Hall and Second Street district–a part of town that in the 1870s–1910s was full of boarding houses, brothels, saloons, and gambling halls mixed in with the homes of working-class families and everyday business ventures. The tour group started the day with a look at some of the many artifacts recovered by archeologists, which included telltale signs of the lively atmosphere–beer and liquor bottles, poker chips, and dice–as well as the items lost or left behind in the course of everyday activities, such as sewing needles, children’s toys, and dishes. The artifacts recovered by this project are curated at TARL.

We then visited the downtown site, where we learned a bit about the geomorphology of the Colorado River and the terrace where downtown Austin sits. Finally, we got to check out the few remaining historic structures in the area. A highlight of the field trip was a visit to the Schneider Beer Vaults, built by German immigrant J.P. Schneider, who dreamed of starting a brewery. The historic building across the street was also owned by the Schneider family and operated as a general store. We also learned a bit about another downtown historic site, the Susanna Dickinson Hannig House, where Alamo survivor Susanna Dickinson lived out her last days. The Dickinson-Hannig House was also excavated during downtown construction in the 1990s, and is now a small museum near the Austin Convention Center.

Special thanks to Josh Prewitt, General Manager of La Condesa, and the La Condesa staff for welcoming us into their space so we could see the underground beer vaults, a unique gem of Austin’s history.