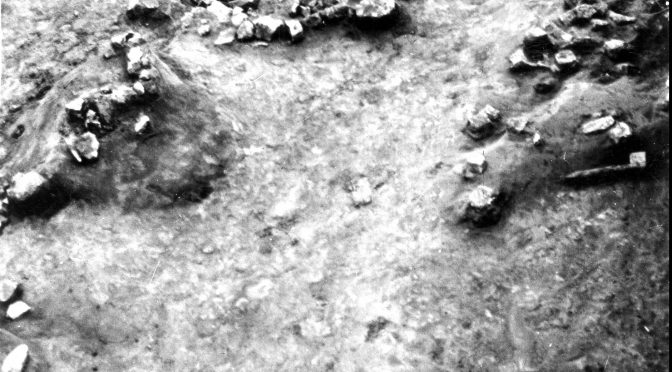 Dan Prikryl is an Affiliated Researcher with the Texas Archeological Research Lab. This article is part of the December 2017 issue of the TARL Newsletter.

In the December 2016 issue of the TARL newsletter, I provided general background information on Works Progress Administration (WPA)-era excavations at the Rob Roy Site, 41TV41, which is located on Lake Austin in western Travis County, Texas. My work on these materials has continued with my most recent analysis focusing on the 21 deeply buried burned rock features that are present within a previously unrecognized Late Archaic I Period component as defined by Johnson (1995:73, 89-98).

One of the most interesting aspects of the analysis of these features concerns an obvious cluster of seven individual burned rock features that together form a large irregular circle. The University of Texas archaeologists who led the field project recognized this cluster, but they provided no interpretation (Woolsey and Oberg 1939:53). This cluster consists of Feature #26, a 1.7-meter (m) diameter, well-defined, basin-shaped circular hearth/earth oven, and six surrounding satellite burned rock features. A circular, 60 to 120 cm wide area that is mostly void of burned rocks exists between the outer edges of Feature #26 and the inner edges of the six satellite features (Figure #1). None of the six satellites are basin-shaped. Instead, they consist of one flat, dense continuous burned rock pavement (Feature 29), four flat, amorphous burned rock groupings (Features #24, 25, 28 and 30), and one somewhat circular burned rock heap (Feature #27). Several of the satellites cover quite large areas including Feature #28 which measures 3.00 x 1.11 m and Feature #29 which covers an area measuring at least 2.76 x 1.62 m.

Overall, the irregular circle formed by the seven features extends 5.97 m on an east-west line. The total length on a north-south line is unknown because two of the satellites (Features #27 and 29) continue into an unexcavated area. The exposed part on a north-south line covers a length of 3.05 m.

With the exceptions of Feature #25 and 30, charcoal and ash were reported as present in all features that comprise the
cluster. Bison bones were present among the burned rocks in Features #26, 29 and 30 with the most noteworthy faunal
specimen being a bison skull found in the top center of Feature #26. The only diagnostic artifact near feature grouping is a
Marshall point that was found between Features #28 and 30 at an elevation about 15 cm above these features.

The irregular circle is like some other feature patterns reported at sites in Central and West Texas that have either been as interpreted as aboriginal structures (Lintz et al. 1995; Johnson 1997) or as incipient burned rock middens (Luke 1983; Hixson 2014). All together, these feature patterns include examples that have been dated to the Early Archaic, Middle Archaic, Late Prehistoric Austin Phase, and Historic Indian periods.

Aside from one hollow area in one of the satellite features, there are no other apparent rock-free spaces within any of the other satellite features that would have been left by wooden posts to support the walls of a structure. Given the overall nature, sizes and shapes of satellite features, especially Features #27-29, the cluster of features more closely resembles an incipient burned rock midden. Hixson (2014) has provided a thorough discussion of the incipient burned rock midden model in which he proposes that these circular features consist of a central earth oven surrounded by satellite clusters of burned rocks that represent earth oven clean-out material resulting from repeated use of the central feature. Hixson (ibid) states that the generally 60 to 120 cm wide circular, vacant space that exists between the central feature and the satellite rock clusters could either be the workspace for the aboriginal people using the central cooking feature or could represent the eroded remains of a former circular berm of stockpiled dirt used in association with earth oven cooking.

Since the Rob Roy Site is situated on an alluvial terrace, it is probable that the incipient burned rock midden was buried during a flood event before continued use would have led to the development of a denser, mounded burned rock midden.