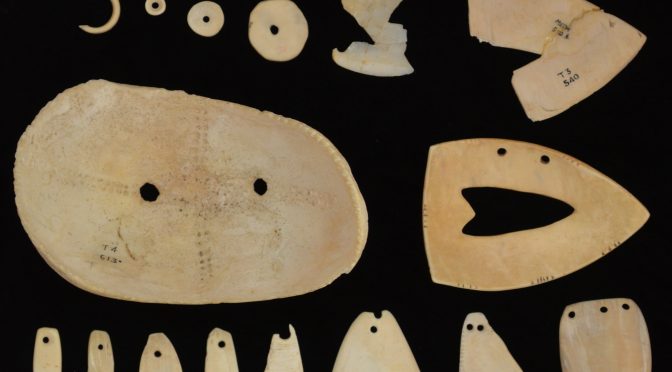 Nadya Prociuk is an Affiliated Researcher at TARL. This article is part of the March 2018 TARL Newsletter.

For the past several months, TARL’s own Lauren Bussiere and I have been working with the A. E. Anderson Collection, which has been housed at TARL for more than 65 years. A. E. Anderson was a civil engineer based in Brownsville, and over the course of his career he surveyed and collected from around 200 sites in the Rio Grande Delta, both in Texas and Tamaulipas. Anderson’s collection contains over 2, 000 prehistoric artifacts such as shell ornaments and tools, chipped stone tools, bone, groundstone, and ceramics. Thanks to his lifetime of work, Anderson’s collection is the most significant resource currently available for the study of the cultural prehistory of the Rio Grande Delta.

Several researchers have worked with the Anderson Collection over the years, though none have completely inventoried or analyzed the collection up to this point. T. N. Campbell studied the collection when it first arrived at the University of Texas in the 1940s, and Richard MacNeish also used the collection as a starting point for his definitions of the Brownsville and Barril Complexes. In the 1970s Elton Prewitt re-surveyed the Anderson sites located in Cameron County, and compiled an inventory of the artifacts from those sites. Multiple salvage and cultural resource management projects have been undertaken in the Rio Grande Valley that have added to our understanding of the archaeology of the area. Unfortunately, work with Anderson’s collection stalled until the late 1990s when William J. Wagner III completed a Master’s thesis on the ceramics in the collection. With his research Wagner confirmed Gordon Eckholm’s early assessment that a number of the ceramics in the Anderson Collection actually came from the Huastecan region of the Mexican Gulf Coast, suggesting significant long-distance trade ties with that area. Though other research has been done in the Rio Grande Delta area since that time, such as Tiffany Terneny’s Doctoral dissertation analyzing local burials, Wagner’s ceramic analysis was the last substantive work done with the Anderson Collection until now.

Nearly a year ago Lauren approached me about an opportunity to contribute to an upcoming edited volume on trade and cultural interaction in North America, and suggested using the Anderson Collection to look at potential interactions between the Rio Grande Delta area and the Huastecan region. We decided to collaborate on the paper, which has proven to be an unexpectedly rich undertaking. Our goal in writing the paper has been to understand the nature of the interaction between the cultures of the Rio Grande Delta and the Huasteca, including what types of items they may have been trading. We have also sought to provide an example of how cultures which may be considered marginal, such as those of the Rio Grande Delta, can be active participants in wider economies of trade and exchange. An added benefit of our research is also to raise the profile of this archaeological region both within Texas and farther afield, since it is often ignored in favor of other areas. We have submitted the first draft of our chapter to the editors, and publication is expected sometime in 2019. In addition to our book chapter, we will be presenting our research at the Annual Meeting of the Society for American Archaeology in Washington D.C. this April, and are looking forward to spreading the word about this fascinating region and getting feedback on our research.

While conducting the research for these projects it became clear to us that though the Anderson Collection is an invaluable resource for the study of the archaeology of the Rio Grande Delta, no comprehensive inventory has been completed since Anderson was in possession of the collection. Such an inventory, with up-to-date classifications, artifact counts, locations, and site information, is a necessary step towards TARL’s goal of making this collection accessible to future researchers. To that end I have been working with the collection since January, and have been fascinated particularly with the abundant use of shell both as ornament and also for tools. It is clear that the people of the Rio Grande Delta were adept at utilizing the abundant marine resources at their disposal to craft a variety of utilitarian and decorative items, and that this shell industry was likely a key element in their interaction with outside groups. It is our hope that through this work the Anderson Collection will become a productive and useful resource for future study of the Rio Grande Delta area, and that others will begin to take a more active interest in pursuing research in this intriguing area.