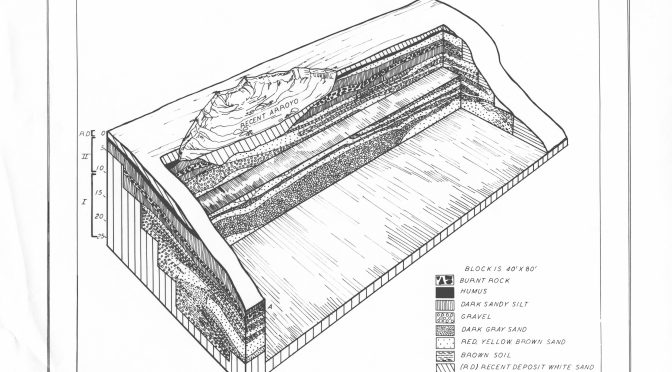 This article is part of the March 2018 TARL Newsletter.

TARL’s map collection is quite extensive. Besides curating maps from present day projects, TARL’s map collection includes those from WPA work around the State of Texas during the 1930s and early 1940s, maps from the archeological work done during the primary Reservoir building era and later, and maps done during the extensive George C. Davis site (41CE19) excavations. Those project maps you may have seen or at least heard about. TARL also has copies of many historic maps as well (many of these maps are white on black copies). Some of the interesting and unique maps in our collection are:

This map collection is available for both professional and avocational researchers to use. Please let TARL staff know ahead of  time, so that we can retrieve the maps you have requested to view.

One example of the use of the TARL map collection in current research comes from the work of Dan Prikryl, a well-known Texas archeologist. Dan has been doing research on the Rob Roy site (41TV41), using maps from the 1938-1939 WPA excavations at that site and has prepared this write-up for the Friends of TARL Newsletter:

The map file for the Rob Roy Site, 41TV41, contains the original stratigraphic profile drawings of various parts of the excavation blocks. These profiles are very helpful since the professional archeologists did not provide a thorough discussion of the soil stratigraphy for all the different parts of the site in their field notes summary. The map file also contains the original contour map drawn of the site and surrounding vicinity on a large Mylar sheet. This map is invaluable since the site and surrounding river valley are currently partially inundated by Lake Austin. It has sufficient detail for usage in scientific publications.