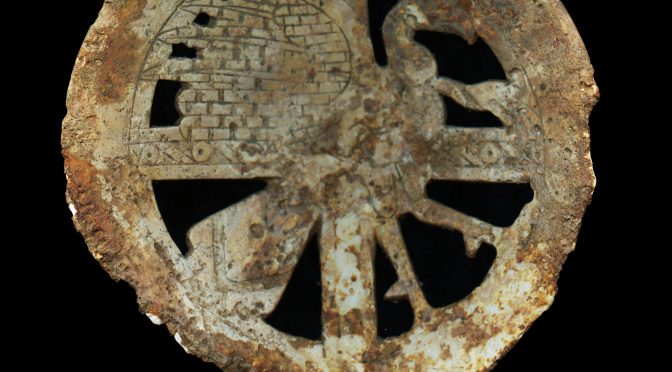 Timothy K. Perttula is a visiting researcher at TARL. This article is part of the June 2018 TARL Newsletter.

Plain and engraved gorgets are rare occurrences on ancestral Caddo sites in the southern Caddo area, as they have been found in burial features at only 13 sites in Southwest Arkansas, Northwest Louisiana, southeastern Oklahoma, and East Texas (Table 1). These include 12 plain and 28 engraved gorgets, and the engraved gorgets have a number of different styles as defined by Brain and Phillips (1996). A number of these gorgets are in the collections of the Texas Archeological Research Laboratory at The University of Texas at Austin, and I have documented them as part of the recent study of a 15th-16th century engraved gorget from the Pipe site (41AN67) in the holdings of the Gregg County Historical Museum in Longview, Texas. 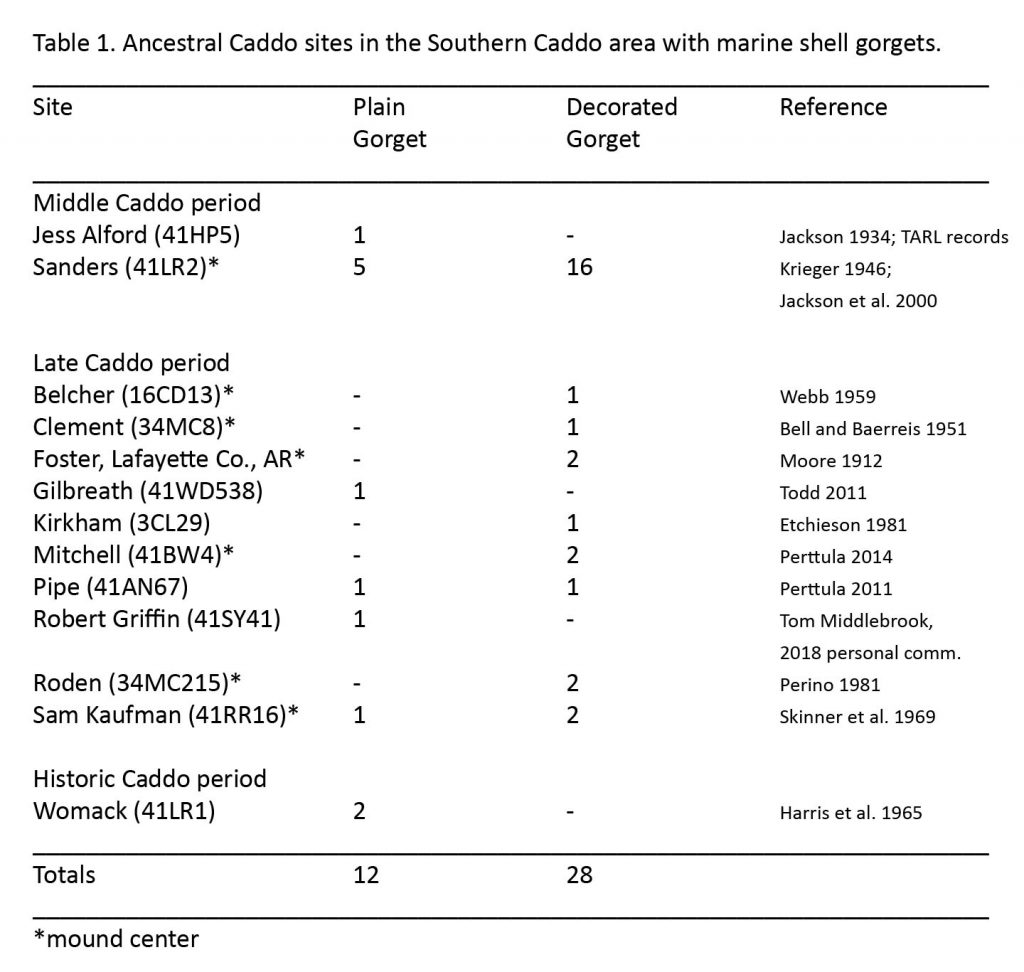 More than 77 percent of the plain and engraved gorgets from the southern Caddo area are from burial features in Middle and Late Caddo period mound centers on the Red River, and approximately 83 percent of the southern Caddo area sample come from burial features on Red River valley sites. The remainder of the gorgets are from sites in the Ouachita (n=1), Little (n=1), Sulphur (n=1), Sabine (n=2), and Neches (n=2) river basins in southwest Arkansas, southeastern Oklahoma, and East Texas. The gorgets in sites in the Sulphur, Sabine, and Neches river basins in East Texas are from non-mound burial features.

Although rare, the clear association of marine shell gorgets with ancestral Caddo burial features (typically the burials of adult
males) found at mound centers is indicative of the display of marine shell jewelry as a prestige good (Deter-Wolf and Peres
2015:179). Such goods were restricted to the use (in life and at death) of the Caddo social elite living at these mound centers,
as they (a) signified and enabled access to supernatural powers and ritual knowledge by the wearer of the gorget, (b)
legitimized political power in communities both local and regional through the acquiring and display of symbolic materials
with high value social currency, and (c) sanctified claims to ancestral Caddo origins, landscapes, and landmarks (cf. Deter-Wolf
and Peres 2015:170; Marquardt and Kozuch 2016:23). The iconography present on marine shell gorgets on Caddo sites
warrants detailed consideration, therefore, because it reflects belief systems of different Caddo groups, as well as the social
relationships between different Caddo groups as well as more far-flung Mississippian groups (see Brain and Phillips 1996).

Bell, R. E. and D. A. Baerreis
1951 A Survey of Oklahoma Archaeology. Bulletin of the Texas Archeological and Paleontological Society 22:7-100.

Etchieson, M.
1981 A Shell Gorget from the Kirkham Site. The Arkansas Archeologist 22:1-3.

Jackson, A. T., M. S. Goldstein, and A. D. Krieger
2000 The 1931 Excavations at the Sanders Site, Lamar County, Texas: Notes on the Fieldwork, Human Osteology, and Ceramics. Archival Series 2. Texas Archeological Research Laboratory, The University of Texas at Austin.

Krieger, A. D.
1946 Culture Complexes and Chronology in Northern Texas, with Extensions of Puebloan Datings to the Mississippi Valley. Publication No. 4640. The University of Texas, Austin.

One thought on “Marine Shell Gorgets from Ancestral Caddo Sites in the Southern Caddo Area by Timothy K. Perttula”