A Recent Acquisition for GSAR

In December 2019 the GSAR and TARL (Texas Archeological Research Laboratory) were fortunate to acquire on a three-year loan, a remarkable Clovis assemblage. Over a period of more than 40 years, Carl Yahnig has collected artifacts from around his property and surrounding area in Christian County, Kentucky. The collection of nearly 20,000 pieces that include stone tools and debitage are from a complex of Clovis single-component workshop sites that lie in southwestern Kentucky; the Adams site (Sanders 1990), and a series of five other workshops, Ezell, Roeder, Boyd-Ledford, Brame, and Brinnon (Yahnig all known as the Little River Clovis Complex (Figure. 1). 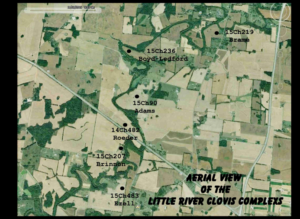 The lithic raw material that the assemblage is made on is predominantly a local variety of Ste. Genevieve chert (> 90 %,), the rest of the artefacts are made on are Dover chert from Tennessee, and an unknown unnamed local chert. The six workshop sites are spaced 1-2 km apart along the course of the Little River. Other Clovis artifacts occur downstream from these sites and are evidence of further Clovis occupation (Gramly and Yahnig 1991). Each of Mr. Yahnig’s workshop sites has in its assemblage a complete Clovis manufacturing sequence, from primary flakes struck from the toolstone nodule through to late-phase fluted preform / early-phase completed fluted point, which we believe are comparatively rare in North America. Other Clovis manufacturing workshops are present in the archeological record, such as Thunderbird (Gardner 1977) and Williamson (Peck 1981) in Virginia, Carson-Conn-Short in Tennessee (Broster and Norton 1993) and Ready-Lincoln in Illinois (Morrow 1995). The Little River Clovis collection represents the only complete manufacturing sequence from Clovis Paleoindian sites made on predominantly one lithic raw material. Although surface-collected, Mr. Yahnig has collected every worked piece of stone he recovered; therefore, this collection has an extensive representation of the debitage that is associated with the tool manufacture, allowing for the possibility of re-fitting sequences. In fact, Mr. Yahnig has already previously recorded several conjoining artifacts, one example was two sections of a late-phase Clovis fluted preform found several yards away from one another and recovered five years apart (C Yahnig pers. comm. December 2019).

The authors of this paper and staff at GSAR and TARL would like to thank Mr. Carl Yahnig for his generous loan and for the opportunity to study this remarkable collection. 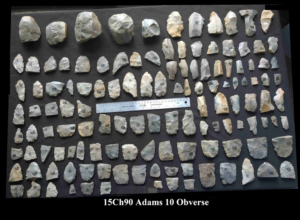 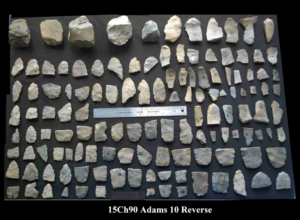 Figure 2a and Figure 2b A sample of Clovis artifacts from the Adams site in Kentucky. (photo C. Yahnig 2009)

Yahnig, C. 2009 My One Hundred and One Artifacts from the Little River Clovis Complex from Christian County, Kentucky. Hynek Printing, Richland Center, Wisconsin.