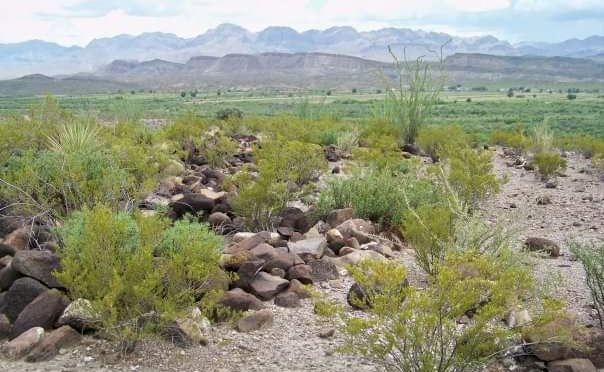 This October for Texas Archeology Month, TARL is offering a series of online lectures, free and open to all. Our second lecture (“A Trade-Friendly Environment”) included unpublished data and the recording will be shared when our speaker clears this with his co-authors. The third lecture took place on October 27 and is available for viewing below.

In this talk, Dr. Riggs discusses nine sites in the eastern Trans-Pecos region that have occupations dating to the Terminal Late Prehistoric/Perdiz point time period and have evidence of plant foods. Investigation of these archeological plant food remains made it possible to reconstruct the inhabitants’ diet and look at which were the most likely important foods. Dr. Riggs explains how his new research changes our understanding for the region and the time period. 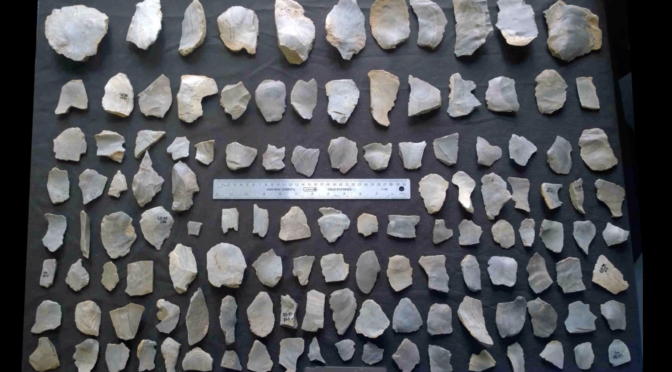 Dr. Alan Slade of the Prehistory Research Project and Gault School of Archaeological Research recorded this talk for the 2020 Festival of Lithics: Lithics Studies Society Online Conference, and we’re sharing it today as part of the our digital outreach program for Texas Archeology Month 2020.

Check out this amazing new collection, collected from Little River Complex Clovis sites in Kentucky beginning in the 1970s and recently moved to TARL for curation.

Clovis in Kentucky: The Little River Clovis Complex: A Recent Acquisition for the Texas Archeological Research Laboratory, University of Texas at Austin 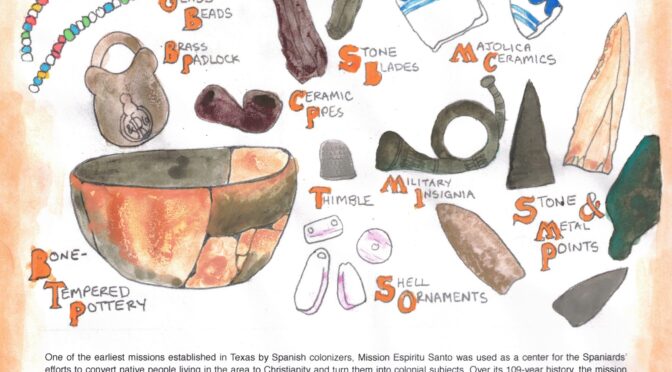 This week’s new coloring page features items from the Espiritu Santo Mission in Goliad county, Texas. This site has been excavated by several different projects from the 1930s to 2000s, and the artifacts recovered tell the story of a transitional time in Texas’ history. The mission was established by Spanish colonists as they attempted to stake their claim to the territory that would be come Texas, and convert native inhabitants into Christians who practiced a more European way of life.

The Mission Espiritu Santo collection includes objects of European and Mexican origin, such as ceramics, metal tools and ornaments, and glass trade beads. It also includes items that were used by the native Aranama people as they continued to conduct traditional activities, such as grinding stones, locally made pottery, and stone projectile points. 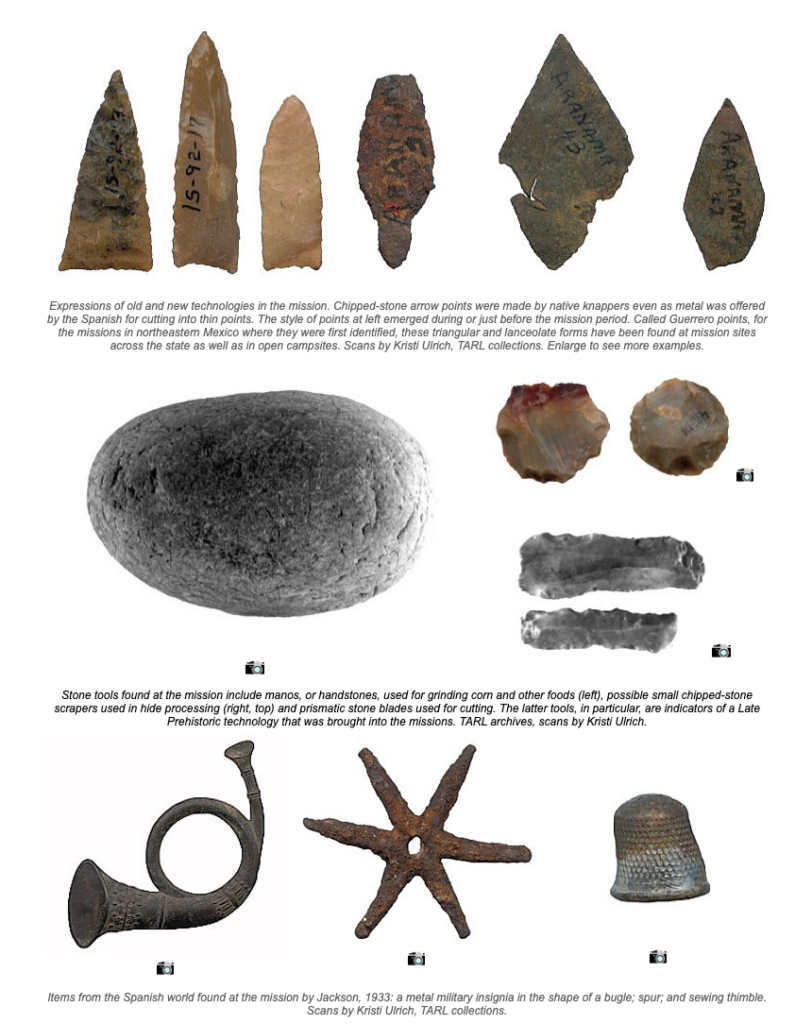 Learn more about Mission Espiritu Santo on Texas Beyond History 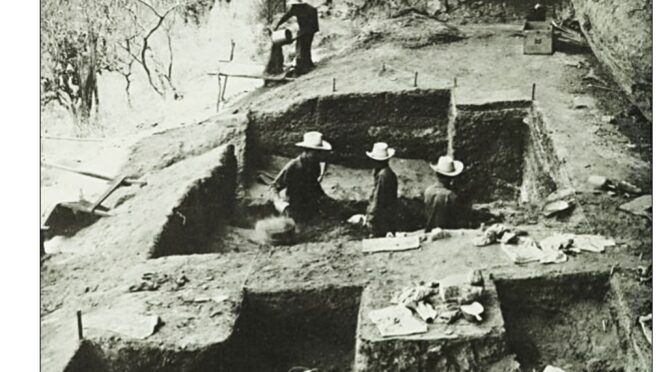 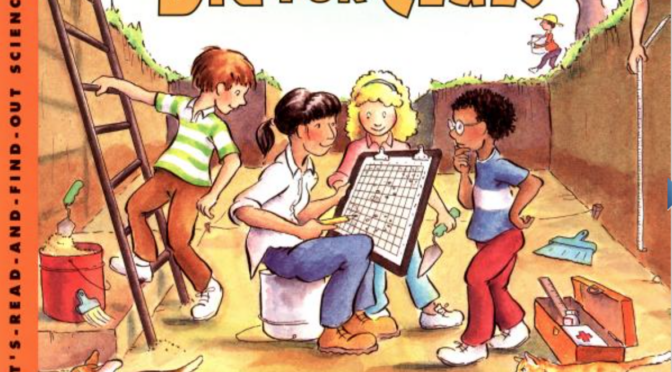 This week for Texas Archeology Month, we teamed up with our wonderful local independent bookstore, BookPeople, to do an online book talk! These book talks introduce readers to new books on a particular subject, so it was a perfect chance to share some of our favorite kids’ archeology books and other resources for learning about Texas archeology.

You can watch the book talk below, and be sure to check out BookPeople’s archeology reading list too! And, explore our past blog posts for more great educational content. 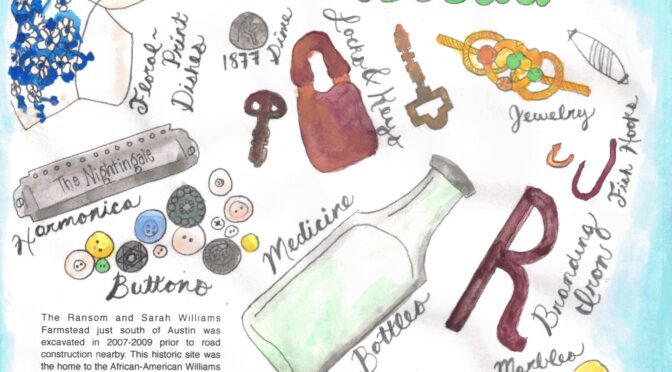 This week we’re featuring a new coloring page with artifacts from a fantastic historic archeological site. The Ransom and Sarah Williams Farmstead near Austin was home to a family of previously enslaved farmers during the Reconstruction and Jim Crow eras. Excavated by a joint project between UT, TxDOT, and two private firms from 2007-2009, the Ransom Williams collection provides an in-depth view into the lives of previously enslaved Texans. More than 26,000 artifacts were recovered during this project, which also included historic records research and oral history interviews with descendants.

The artifacts represent a wide range of activities, from the farming and homestead activities that supported the family to their education and leisure preferences. Overall they paint a picture of a hardworking family that was able to enjoy the fruits of their labors. 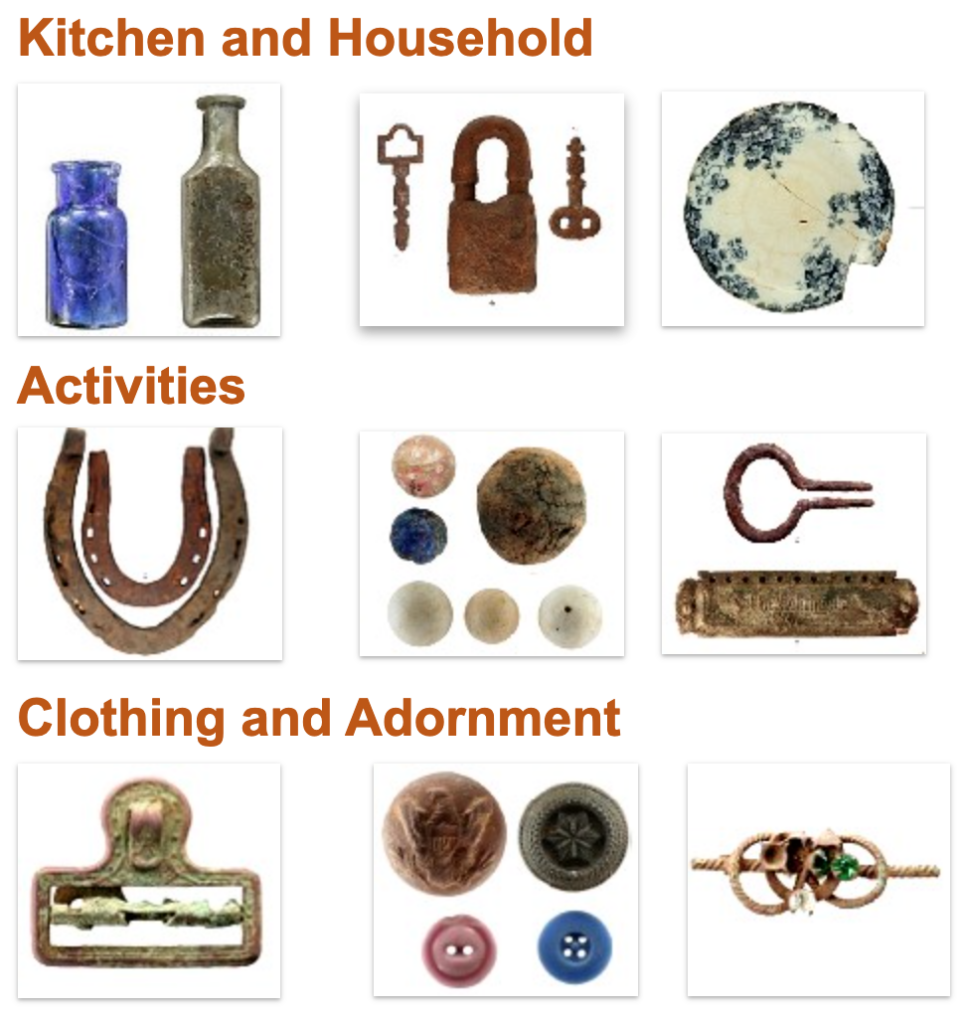 Learn more about the Ransom and Sarah Williams Farmstead

collection on Texas Beyond History 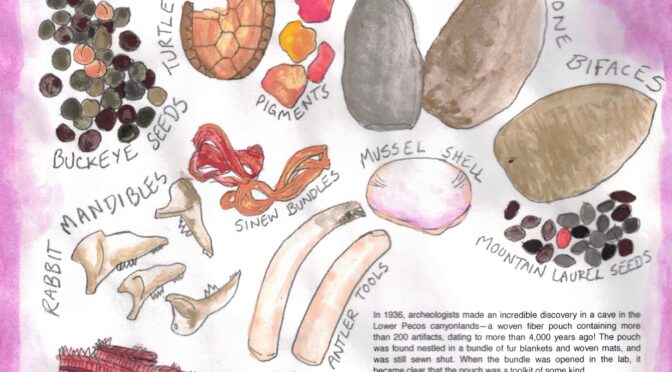 This week’s new coloring page features one of the most spectacular finds in the history of Texas archeology: a woven pouch found with more than 200 unique artifacts still contained inside. The pouch was found by archeologists working in Horseshoe Ranch Cave in West Texas in 1936. They found the pouch wrapped in a larger bundle of woven matting and rabbit fur, and removed it to the lab in Austin to be opened there.

The contents of the pouch appear to be the toolkit of a hunter, healer, or shaman, with various types of tools, toolmaking gear, and special objects. These objects were made and used by an indigenous inhabitant of the area more than 4,000 years ago! 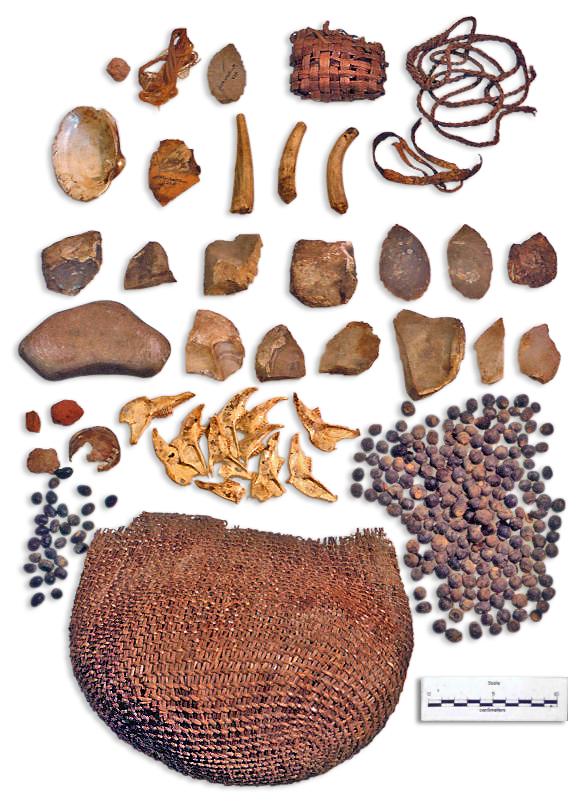 Learn more about the Hunter’s Pouch on Texas Beyond History. 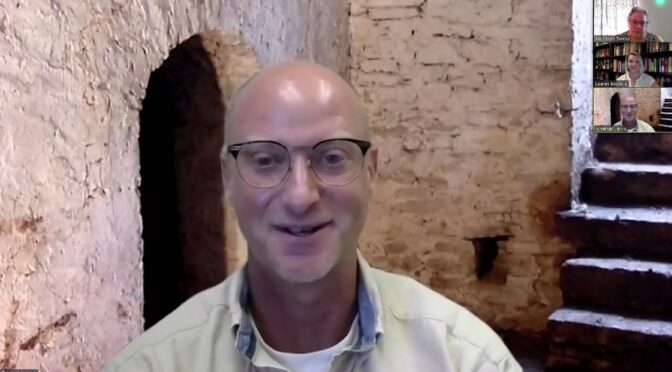 Texas Archeology Month looks little different than usual this year, since our in-person events are cancelled due to the Covid-19 pandemic. But, that won’t stop us from bringing you tons of new and exciting Texas archeology updates and activities! Here’s one new way to connect with us:

We also thought we’d introduce TARL to anyone who isn’t familiar with us! Former TARL staffer Lauren Bussiere (ahem, that’s me) sat down with Associate Director Jonathan Jarvis and Head of Collections Marybeth Tomka to talk about what’s new at TARL. Check out the video below!

Many thanks to Jonathan, Marybeth, and Annie, as well as to Tom Williams of the Prehistory Research Project, who recorded and edited this video. 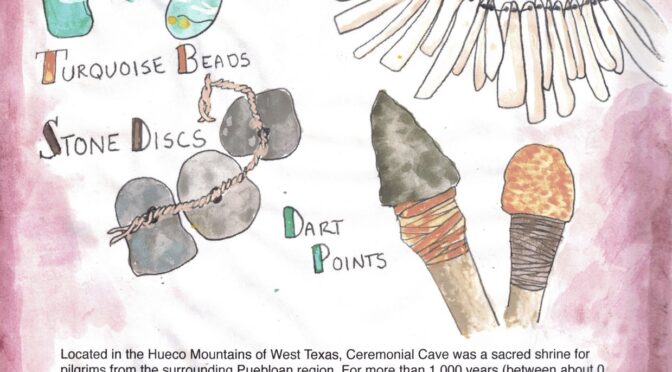 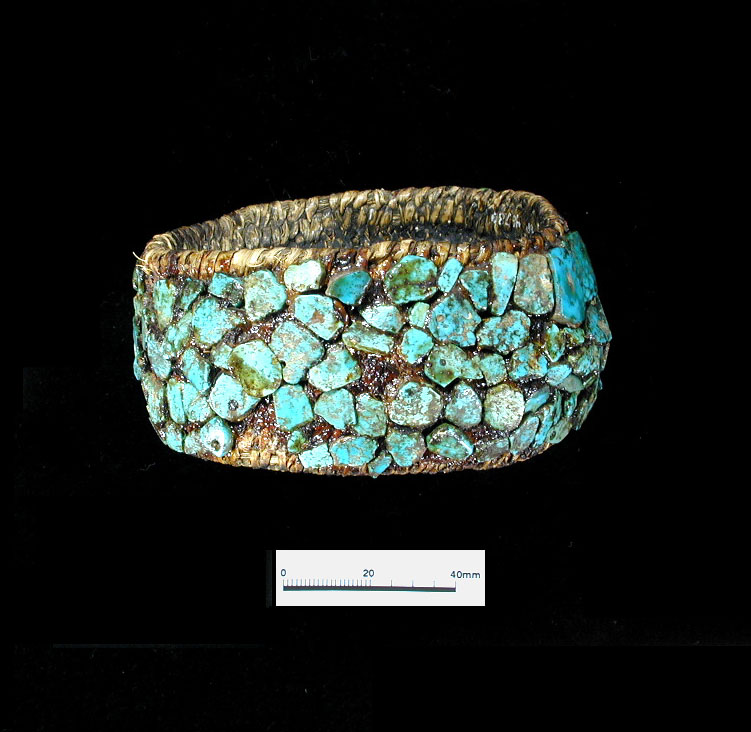 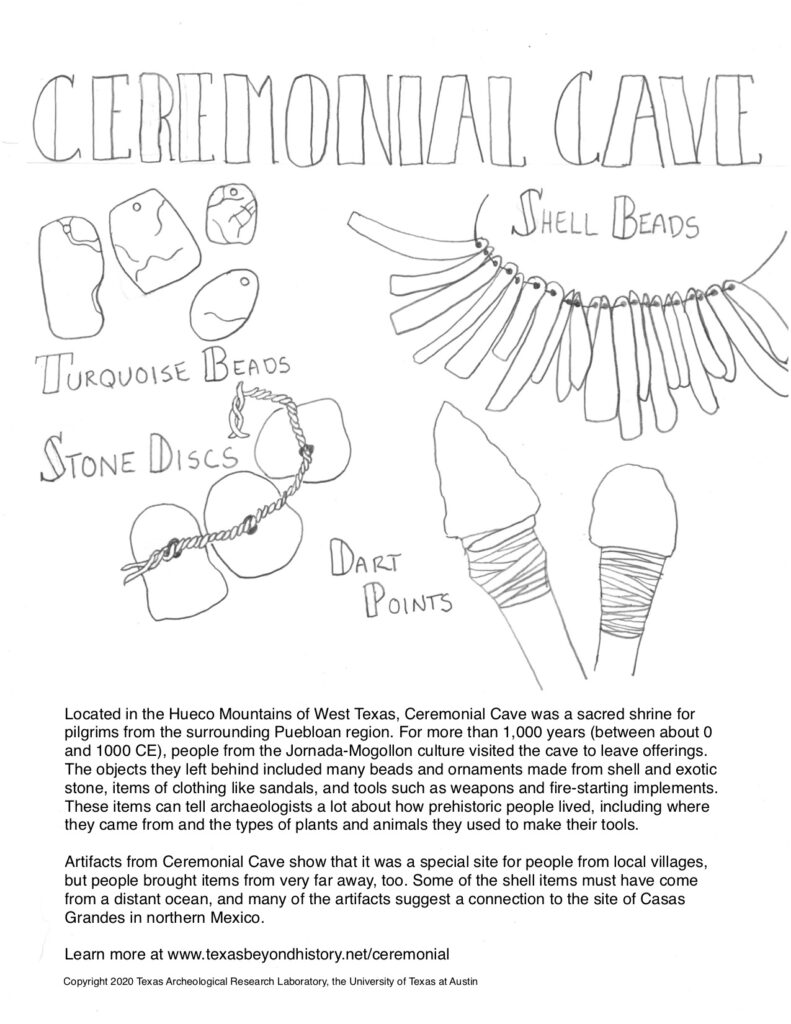 October is always beautiful in Texas, and no time is better to get outside and enjoy nature. Next time you visit your local park, try this fun family activity to learn more about prehistoric life in Texas.

The Take A Hike scavenger hunt encourages kids (of all ages) to engage with the natural world by imagining what life was like in prehistoric times. By visualizing ourselves in the shoes of people who lived here before us, we can gain an appreciation of traditional lifeways and learn to think about what people may have left behind–the clues archeologists use to piece together prehistoric cultures.

This activity comes with a worksheet for kids and a guide to help parents and educators lead a discussion. We hope you enjoy it! 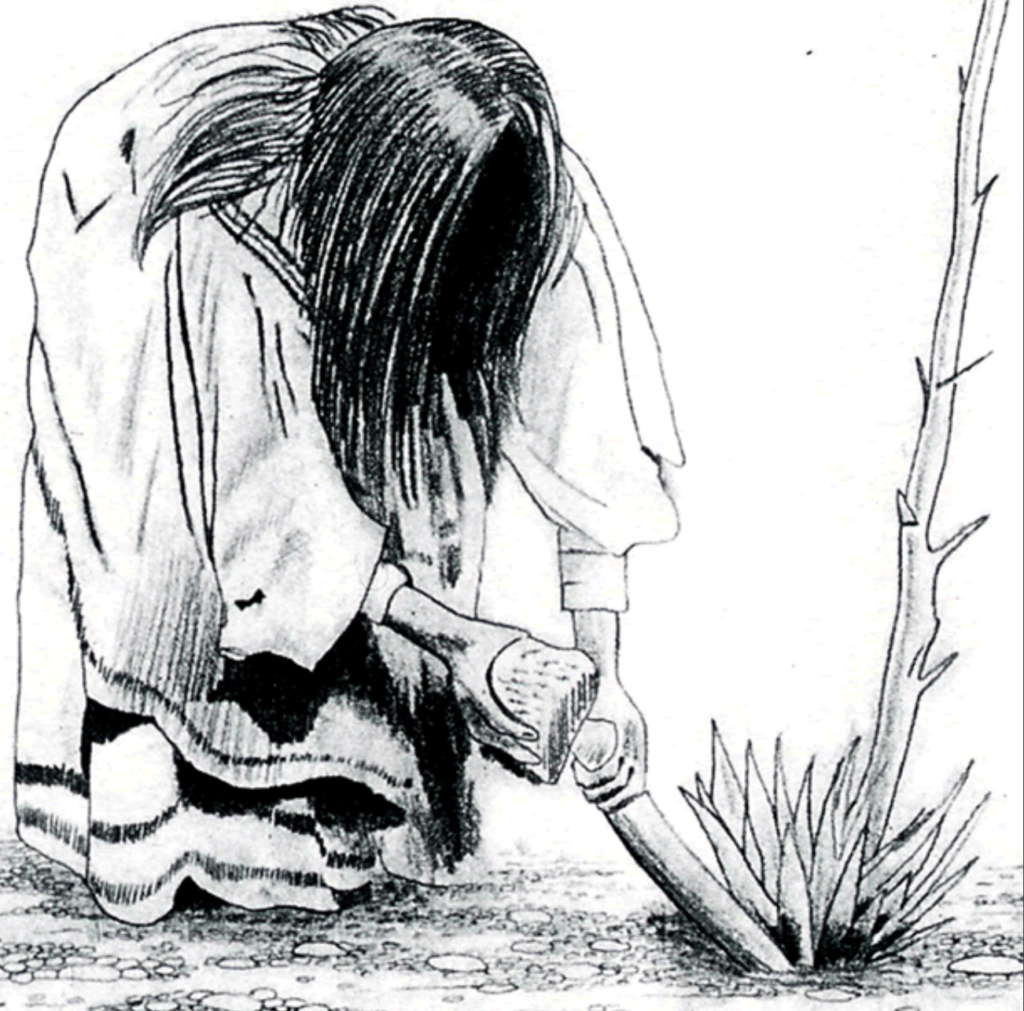