“New Year, New Me” is an expression many of us have heard at least once in our lives, typically said in January with the start of a new calendar year. “New Year’s resolutions” are goals that we set right at the start of a new year that can involve building new habits, letting go of old habits, or achieving something new. The idea of having a fresh start is certainly appealing, but how many of us actually stick to these resolutions, and why do we even make them in the first place?

Why are we seeing such low numbers of people sticking to their resolutions? One reason lies behind the science of forming new habits. Many researchers have shown that it takes a minimum of 18 days to form a new habit, with repetition and reinforcement being the key to successful habit-building. One study from 2009 reveals that it can even take as long as 254 days to form a new habit, but the average amount of time is about 66 days. Many have theorized that as we increase the number of distractions in our lives, such as social media and other forms of technology, it becomes harder to stay focused on our goals and stick to the routine and repetition necessary for forming a new habit.

The idea behind creating a New Year’s resolution is that one “must” achieve something new by the end of the year. This is a potentially harmful mindset to have, since failing to meet this expectation can lead to disappointment. Additionally, many of the goals that people set as their New Year’s resolution involve attaining unrealistic or unsustainable results. For example, goals related to body image can create an unbearable pressure for many people.

It’s time to shift the conversation and focus on setting goals for ourselves throughout the year that allow us to grow and develop in healthy ways. Why do we need to wait until January 1st to start working on things we want to achieve; why not focus on change when we feel that we need it? Moving to a new place, starting a new job, or finishing school all represent major life changes that can signify the start of something new, and subsequently, the beginning of new goals and aspirations. And why must our resolutions be something that we set an arbitrary deadline to? Does failure to meet that deadline mean that we have not made progress? We should focus instead on setting goals for ourselves that allow us to reflect on how much we have grown, regardless if we achieve the ultimate goal or not. Our goals should be meaningful to us and not structured around other people’s ideas of success or improvement. These goals should afford us days to slip-up and be off-track but able to jump back in when we are ready; progress is not a linear pathway, so we ought to be more patient and forgiving with ourselves, instead of strict and unrealistic.

There is a post I recently saw on Instagram that discusses how our New Year’s resolutions can either be constructive or destructive. Constructive goals should, among other things, be inspiring, achievable, and focused on growth. Destructive goals, on the other hand, are typically time-sensitive and inspired by other people’s timelines and outward-facing success. Posts like these are important to share in our feeds so that we can help reduce the pressures behind setting new goals for ourselves. As another popular saying goes, “life is a marathon, not a sprint.” 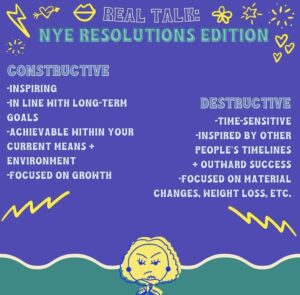 Growing up, I was someone who constantly created these resolutions at the start of every year that were more focused on what other people would consider to be measures of success. My goals were largely focused on changing how my body looked or pushing myself to achieve the highest of grades just so I could get into a “good college.” Instead, my goals should have been focused on improving my own self-image or devoting more time to the things in life that I enjoyed. As I get older, I want to work on achieving personal growth in ways that are meaningful for me, and I think that this is what New Year’s resolutions should really be about.

Photo by Annie Spratt on Unsplash