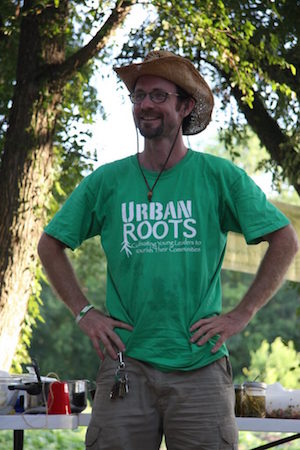 Food access is an issue dear to Max Elliott (MSSW ’12). He is executive director and co-founder of Urban Roots, an Austin nonprofit that uses sustainable agriculture to transform the lives of young people and increase access to healthy foods. During the spring and summer months, East Austin high-school students receive paid internships to work at the Urban Roots sustainable farm. Urban Roots donates 40 percent of the harvest to local food pantries and soup kitchens, and sells the rest at local farmers markets, wholesale, and through a Community Supported Agriculture (CSA) program. For Max, it’s all about food justice.

I have been interested in community engagement at least since high school. After working on a farm that had a strong educational component, I realized that food and farming were great tools to bring people together, celebrate cultural diversity and food traditions, and give people critical skills and empowering opportunities. As I saw the food movement grow, I also realized that there was a large segment of the population being left out. A turning point in this realization was my work in a community garden in New Orleans, in the Lower Ninth Ward. For many of the community residents, these were the only fresh vegetables that they were going to eat. They were growing food not as a hobby, but for sustenance. So, my interest in food access was really driven by the desire to ensure that everybody has access to healthy, sustainable raised, and fresh food. Food justice is a term that I use a lot.

How was Urban Roots started?

I was working in an afterschool garden project for a middle school, and I quickly realized that there was a great opportunity to scale up the impact. We did a lot of groundwork before launching Urban Roots. We researched best practices around the country; we held a community meeting to pose the project to local farmers, educators, and hunger-relief advocates; we also held focus groups with youth from East Austin schools. Thanks to all this prep work, when we got funding we already had partners with early buy-in.

How did your social work degree prepare you for the work you are doing?

It has been really essential. When I was working in New Orleans I realized that my training as a horticulturalist was not enough. I could teach people how to plant and to compost, but what the community really needed was developing capacity and leadership, and engaging youth. I was really doing social work, and I felt very unprepared.

The clinical skills I acquired during my MSSW are at the core of the work I do at Urban Roots. As Executive Director, I developed a very cooperative and collaborative leadership style. At the farm, clinical skills are key to engage with the youth.