It is not unusual to see negative depictions of immigrants in the media and in popular culture. In particular, immigrants are often viewed as dangerous and prone to involvement in problem behaviors like violence, crime, and substance abuse. 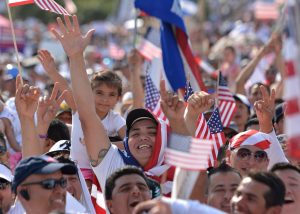 However, our research — and the research of scholars across the United States — suggests that these depictions have little basis in reality. In fact, a growing body of evidence on the topic of the “immigrant paradox” suggests that, despite experiencing adversity on multiple fronts, immigrants are substantially less likely than native-born Americans to be involved in the vast majority of violent, antisocial, and high-risk behaviors.

Over the last few years, my colleagues and I have used nationally-representative data collected by the National Institutes of Health to systematically examine the behaviors of immigrants and non-immigrants in the United States. Our research on this topic, which has been published in journals such as Social Psychiatry and Psychiatric Epidemiology and Drug and Alcohol Dependence, tells a fascinating story. We found that, compared to native-born Americans, immigrants tend report lower household earnings and lower educational attainment. This is noteworthy as traditional social science theorizing suggests that such disadvantages would place immigrants at elevated risk for involvement in a wide swath of problem behaviors. And yet, immigrants in our sample were far less likely to report involvement in a host of violent and antisocial behaviors, including: property destruction, shoplifting, theft, reckless driving, fight starting, use of a weapon, and blackmail. We found very similar results for substance abuse as immigrants were substantially less likely than native-born Americans to meet diagnostic criteria for alcohol, cannabis, and other illicit drug use disorders. As summed up by the title of a Washington Post article that recently commented on our research, “Immigrants are less likely to do just about every bad thing a person can do.”

In our assessment, these findings represent good news for immigrants and good news for society. It is in everyone’s best interest for immigrants to do well and to steer clear of problems. Regretfully, however, this is not the full story. Our research also suggests that the protective relationship between immigrant status and violence, crime, and substance abuse tends to weaken over time. That is, we found that each year an immigrant spent in the United States was associated with small but significant increases in the probability of engaging in problem behavior. Similarly, although second-generation immigrants were also less likely than non-immigrants to be involved in problem behavior, evidence suggests that the children and grandchildren of immigrants tend to increasingly resemble native-born Americans with respect to their involvement in violence, crime, and other problem behaviors. We also found that the protective effect of immigrant status was weaker among those who came to the United States at earlier developmental stages. These points underline the fact that the relationship between immigrant status and problem behavior is not static, but rather it appears to be an ongoing process of acculturative change over time.

Overall, this research has a number of important implications. First and foremost, it provides evidence that runs counter to stereotypes that portray immigrants as dangerous, criminal, and threatening to society. While certainly some immigrants take part in problem behaviors, they are far less likely to do so than are non-immigrants. Second, evidence that the protective effect of immigrant status tends to diminish over time raises a number of provocative questions. Is there something about being in the United States that seems to increase the probability of immigrants and their children becoming involved in problem behavior? Or could it be that first-generation immigrants are simply highly motivated to succeed and tend to be surrounded by other like-minded immigrants? In this case, it may be that the protective effect simply wears off with successive generations. As such, it is important to ask what can be done to help maintain the factors that seem to protect immigrants upon arrival. In all, research on the “immigrant paradox” is important as it helps to dispel myths about immigrants, but these findings—particularly evidence that the protective effect of immigrant status tends diminish over time—also constitute an important challenge to those working to help immigrants to preserve the psychosocial and cultural factors that help them to do well and stay out of trouble.

Christopher Salas-Wright is an assistant professor at the School of Social Work.