The University of Texas at Austin is one of nine university-led groups that was selected to move forward in the NASA SmallSat competition. Project OCELOT aims to improve navigation technology around the Moon, by using craters on the surface to navigate. OCELOT will be the first time the navigation technology will be demonstrated in orbit. Small spacecraft are pioneering the way for future manned and unmanned exploration, as they can relay communications from the Moon and back, and can help autonomous vehicles navigate on the surface, akin to a GPS.

The mission will be collaborative, involving Drs. Brandon Jones and Renato Zanetti, graduate students at UT Austin and at NASA JSC, and the Texas Spacecraft Laboratory. TSL’s specific role will be to plan the mission design and satellite design. The current phase of the project will last two years, after which point the physical construction of the satellite will ideally begin.

At the end of the Fall semester, the SERPENT team went through the next review of the UNP mission cycle, the Preliminary Design Review, or PDR. At this review, we received a lot of constructive criticism on individual subsystem performance as well as the overall mission architecture. After evaluating the feedback, it was determined that we needed to make some major architectural changes to our mission, as it was deemed complex and difficult to achieve given our current resources. Given the situation it was deemed necessary to host a PDR-Delta review, as our mission architecture needed to be solidified to allow for component procurement and testing before the Critical Design Review (CDR) projected to occur early in the Spring 2021 semester.

The primary change to the SERPENT mission is the elimination of the second satellite. Instead of launching two 6U CubeSats, CORAL and KING, SERPENT now only consists of a singular 6U satellite that will release a small, passive target from a bay. This target shall have identifying patterns that SERPENT will utilize to aid with trajectory reconstruction of the target post-deployment. This change allows the pose estimation algorithms being developed in-house to be tested more thoroughly.

This change in architecture has also allowed for the inclusion of running stress tests on the Jetson TX2i in the Low Earth Orbit environment as a secondary experiment to be conducted after the primary experiment’s completion. This will be done to aid the characterization of Jetson TX2i in adverse radiation environments.

Alexis Zinni, the current student lab director had an article posted by the ASE department. Read more about it here!

The TSL hosted ~30 Austin-area students from the Hello World K-12 computer science program. Ali Babool, Alejandra Naranja, and Alexis Zinni spoke with the students about their experiences in the TSL.

TSL director Noble Hatten and nine TSL students traveled to Pasadena, CA to take part in an A-Team study at NASA Jet Propulsion Laboratory (JPL). The goal of the study was to assess mission concepts under consideration by the TSL for upcoming proposal opportunities. The study was funded by a JPL Center for Academic Partnership (CAP) award organized by JPL systems engineers (and UT ASE alumni) Travis Imken and Ravi Prakash, and Noble Hatten and Lecturer Walt Daniel at UT. The visit lasted for two days. 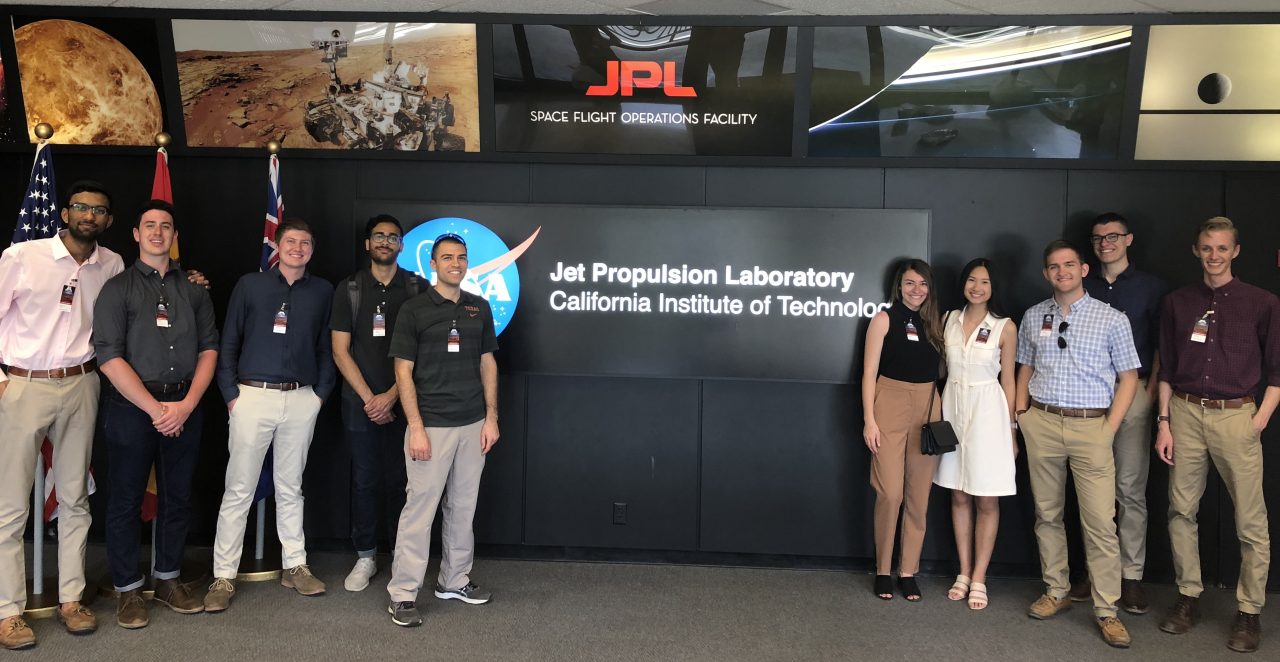 Following delivery of the ARMADILLO flight vehicle to launch integrator Tyvak Nano-Satellite Systems, Inc. in San Luis Obispo, CA earlier in May, the TSL received confirmation that ARMADILLO was successfully integrated into a P-POD. ARMADILLO now awaits integration into the STP-2 launch vehicle.

The TSL participated in the annual Explore UT event. TSL students discussed with visitors several of the many aspects that go into building a spacecraft. The students walked the visitors through putting together 3D-printed CubeSat facsimiles to describe how spacecraft communicate, generate power, maneuver, and more.