Watch the Video Recording of this session HERE.

“The Indigenous Cultures work to preserve the cultures of the Native Americans indigenous to Texas and northern Mexico while maintaining our covenant with sacred sites.

The Indigenous Cultures Institute was founded in 2006 by members of the Miakan/Garza Band, one of the over six-hundred bands that resided in Texas and northeastern Mexico when the Spaniards first arrived. 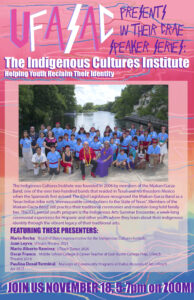