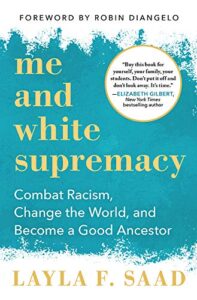 In today’s Me and White Supremacy challenge, Layla Saad explains how “color blindness” is a form of racism. Describing how white adults would tell their children not to call her Black when she was young, she says, “It often left me wondering, was Black synonymous with bad? Was my skin color a source of shame? And if so, was I expected to act as if I were not Black to make white people more comfortable around me?” (78)

The role race plays in identity has had an especially potent effect on recent movies, TV shows, and theatre as more productions attempt to cast people of diverse backgrounds in roles traditionally performed by white actors. This is often referred to as color blind casting, and it is fueled by the belief that simply replacing a white actor with a Black (or Asian or Latino, etc.) person can be done without any effect on the production itself. It is seen by some as progressive. However, while diversity onscreen is important, many artists have pointed out that pretending Blackness does not exist is not the way to ensure racial equity.

Black American playwright August Wilson pushed back strongly against colorblind casting in 1996 when he addressed the state of theater at the Theatre Communications Group national conference:

The idea of colorblind casting is the same idea of assimilation that black Americans have been rejecting for the past 380 years. . . . In an effort to spare us the burden of being “affected by an undesirable condition” and as a gesture of benevolence, many whites (like the proponents of colorblind casting) say, “Oh, I don’t see color.” We want you to see us.

Wilson argued that casting Black actors in canonical plays like Arthur Miller’s Death of a Salesman perpetuates the idea that only white voices and white stories matter. Instead, non-white artists need the spaces and budgets to tell their own stories.

Likewise, the Black Canadian playwright and actor Omari Newton described color blind casting as “an insidious and absurd form of racism” in an article discussing a 2019 production of All My Sons (coincidentally, also by Arthur Miller) in which two of the key roles were played by Black actors. This casting choice “pulled” Newton out of the story. He says:

Colour blind casting. . . is the theatrical equivalent of ignorantly telling your Black friend “I don’t see colour” when they try to engage you in a conversation about race. It is passively dehumanizing in the way that it dismisses the racism that is embedded in the very fabric of how colonized countries were founded.

Instead, Newton encourages casting directors to utilize “colour conscious casting.” This enables non-white actors to obtain roles in major productions while also ensuring thoughtful recognition of what it means for an actor of color to play certain roles. 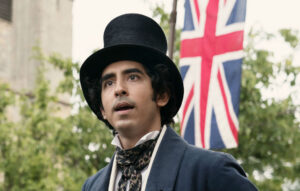 One example of this was the casting of Anglo-Indian actor Dev Patel as the (canonically white) titular character in Armando Iannucci’s 2019 adaption of Charles Dickens’ The Personal History of David Copperfield. Iannucci chose Patel both because of Patel’s skill and because he wanted “the cast to be much more representative of what London looks like now.” Likewise, Lin-Manuel Miranda’s Broadway juggernaut Hamilton famously cast non-white actors as the (white) Founding Fathers and utilized music genres like hip-hop and jazz that were created by Black Americans.

Nevertheless, this approach is also controversial. While Miranda’s creative approach highlights the music, appearance, and dialect of non-white Americans, there is also a danger that it obscures the fact that America’s Founding Fathers were white men, many of whom owned slaves. In a 2020 interview with The Root, Leslie Odom Jr, the Black actor who played Aaron Burr in the original Broadway run, addressed this controversy by placing the musical in a historical context. He argued:

This isn’t the end of the conversation; it is the beginning. . . . Lin [Manuel-Miranda] ran his leg of the race. This was the story Lin wanted to tell. Now it’s up to you to tell the next story. There’s no doubt in my mind that someday someone is going to write the show that makes Hamilton look quaint. 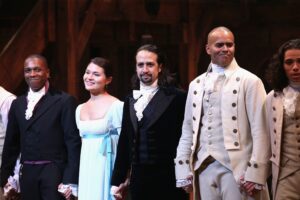 The creative and entertainment industries are strengthened by the inclusion of non-white artists because they bring new stories to the screen and stage. Attempting to perform inclusivity by slotting non-white actors into traditionally white roles without any recognition of the changes this brings to a production is a way of silencing those stories and thus a form of racism.

For more information about researching film, check out the guides for Radio, Television, and Film and Film & Video Resources. The UT Libraries also subscribes to Kanopy, a streaming service featuring classic, independent, and world cinema as well as documentaries. For more information about researching race in America, check out the guides for African American Studies, Asian American Studies, Latin@ Studies, and Native American and Indigenous Studies. And make sure to follow along with the remaining twenty days of The 28 Day Challenge, sponsored by LSC and DAC!