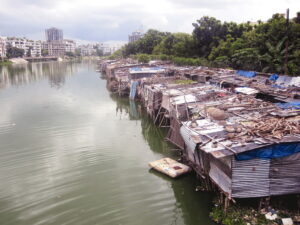 Adequate, affordable and accessible housing for low-income, informal and slum settlements cannot be discussed or conceptualized in isolation from secure tenure. Doing so reiterates unsustainable development practices and notions that low-income and informal settlements do not have equal rights in terms of where they live. In the absence of an economic and social incentive to invest in improving their living conditions, alongside the threat of routine evictions, low-income communities resort to inexpensive and readily available building materials, which are not resilient or sustainable.

In Bangladesh, Kutcha housing, housing constructed using temporary building materials, constitutes more than 60% of the building typology, including non-slum urban housing. Such poor quality of construction and built form are temporary in nature and are not resilient to disaster risks and climate change-induced stresses. However, opportunities do exist in urban Bangladesh to modify and adapt tenure regimes to suit the country’s political-economic contexts which can make it easier to implement. Like other island nations in the Pacific, Bangladesh presents us with a good case study of how to adapt tenure for varying population densities.

Bangladesh’s susceptibility to climate change-induced stresses, exacerbated by its population density makes it the 6th most disaster-prone country. Demographically, 8.9% of the population in Bangladesh lives in low elevated coastal areas. With an average elevation of less than 12 m (39.4 ft) above sea level, approximately 10% of Bangladesh’s land would flood if sea levels were to rise by 1 m (3.28 ft). In Dhaka, increased rainfalls up to 2,000 mm annually have forced communities living alongside the rivers to relocate. Eastern parts of Dhaka, where majority low-income settlements are founds, are most affected by floods. Also, an earthquake of 6.5 or greater in magnitude near Dhaka could result in more than 88,000 buildings collapsing. Environmental and disaster threats are not only endangering people’s lives but also altering livelihood and employment patterns. 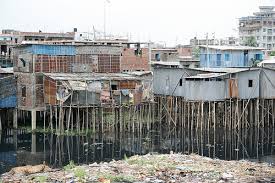 Understanding tenancy is important to increase resilience as investments in housing render themselves futile in case of insecure tenure. With more than 70% of slum households living in rented accommodation, the provision of resilient housing in the absence of security of tenure holds little meaning since households must still grapple with the threat of relocation or eviction. In 1997, 2,991 slums occupied 8000 acres of land, approximately 0.21% of its current urban area today. Even if land under slum settlements has since tripled (to approximately 24,000 acres) it is still less than 1% of the current land in urban areas in Bangladesh. Such figures are important to contextualize tenure feasibility, since its being implemented at relatively small scales.

Insecure tenure makes low-income communities less resilient since households have little incentive to improve their housing, either by incurring debt or through savings, if they are to be frequently evicted. Bangladesh’s categorization of a slum is extremely small as it counts settlements as dispersed as 5 households as slums. This categorization makes it difficult to undertake in-situ resettlement since housing and infrastructure are not being built at scale and the cost of providing water sanitation related infrastructure might render projects financially unfeasible. By expanding this categorization to a greater number of households, for example, a minimum of 60/70 households, will become easier to undertake in-situ resettlements projects since there will be a critical mass. In-situ resettlements, wherever possible, are extremely important as they minimize disruption in income and livelihoods for low-income households and slum settlements.

Spatially disaggregating growth
Land costs in municipalities and other urban areas outside of Dhaka might allow experimentation with lease to own, community titling, affordable housing zones, no-eviction guarantee forms of secure tenure which can be used to improve the quality of built housing. In Dhaka, utilizing the private real estate market through transfer development rights could be a potential strategy to decongest areas of the city and to free up land for constructing new-resilient affordable housing. As 40% of slum settlements are outside the municipal corporations of Chittagong and Dhaka, there is potential to experiment with lease-hold forms of secure tenure since land and urbanization pressures are lesser in these areas. Only 7% of slum households live in rent-free housing and almost 50% of slum households live on rented housing on government land.

By formalizing existing rental housing on government land through further infrastructure upgrades and location-specific building guidelines, a bulk of the housing shortage can be formally addressed with significantly fewer investments. Slum settlements on government land outside of city corporation areas can be given more secure forms of tenure which increase household investments in their built environment and increases resilience. Legalizing auto-constructed housing on existing sites if feasible, does not disrupt employment and livelihood opportunities for communities. Since it is government-owned land, rent-to-own models can also be implemented to generate revenue and secure community buy-ins. Providing security of tenure through rental housing can be a cost-effective measure in increasing resilience.

Despite its on paper cross-sectoral approach towards climate change adaptation, the Ministry of Housing and Public Works and the Urban Development Directorate are glaringly absent from the institutional settings meant to address climate change adaptation and disaster risk mitigation. Additionally, even though there have been efforts to construct resilient housing through the Ministry of Disaster Management and Relief and BCCSAF, these practices are not being implemented at scale as they are not instituted within UDD as standard procedures. Under MoHPW, The Housing and Building Research Institute can play a more prominent role than it currently is, invest more heavily in resilient construction materials and practices and collaborate with other ministries to work towards instituting these methods in government and privately built housing.

This institutional disconnect and lack of coordination have much larger ramifications on the ground because unless current patterns of urban development and growth are made resilient towards such vulnerabilities, current built forms will find it extremely difficult to address resilience at scale. As mentioned earlier, despite climate change adaptation and disaster risk frameworks, the absence of an interconnected resilience framework addressing low-income housing challenges is equally important. This is crucial for institutionalizing resilient housing and construction practices that are cognizant of their environment and the risks they must be designed to sustain.

[i] Example is taken from the categorization of slums in India under Rajiv Awas Yojana, 2005

Anushree Deb is a graduate student at the Lyndon B. Johnson School of Public Affairs and is pursuing a Masters in Global Policy Studies. Over the summer, Anushree interned at The Asian Development Bank HQ in Manila and worked on increasing urban resilience through low-income housing in Bangladesh & Philippines. Prior to LBJ, Anushree was a Senior Associate at the Indian Institute for Human Settlements in Bangalore, India where she worked on issues of urban development & governance, land use planning and violations, water & sanitation networks as well as urban heritage conservation. She has a masters in urban policy & governance from the Tata Institute of Social Sciences and a bachelors in history from Delhi University.