This week the visiting engineers from Austin aligned the Video Alignment Telescope (VAT) to the corrector optics and then aligned the corrector to the the center of the primary mirror. This sets our axis for making all trajectories. We will now set the distance from the primary to the VAT. Work will continue over the weekend and we will then turn the VAT around and measure the angle from the VAT up to the CCAS instrument. This last will be night work. So far things are progressing on schedule.

The big news this last week is that the Prime Focus Instrument Package (PFIP), the Lower Instrument Package (LIP) and Focal Plane Assembly (FPA) were installed. We are now in the process of getting electricity, glycol and air to these systems. We have started testing the subsystems in place such as filter wheels and guide probes. This is a bit tedious and sometimes requires careful book keeping as we bring together separate systems into one coherent telescope. This next week we hope to have the Austin WFU optics team come out to align the Corrector optics to both the PFIP mechanical system and the HET primary mirror optics. If that goes smoothly this next weekend we may be aligning the corrector to the CCAS tower optical system. All of these alignment tasks are accomplished with the Video Alignment Telescope (VAT) which is an auto-collimating camera which we have designed a mount that allows it to be mounted either pointed down towards the primary mirror or up towards the PFIP, FPA and CCAS tower and sky.

To get ready for this transition to more night work we have a 2nd telescope operator (TO) training with the TO who has been working with the engineers for the past 9 months. At the beginning of next month we will be ready for 1st light through the corrector and will start to require all 3 TOs and some of the Resident Astronomers to work all night long.

One very exciting test that we were able to conduct this past week was to actually test our oxygen sensors that have been installed to look for spills from the liquid nitrogen system which might displace some oxygen. This liquid nitrogen system has flow sensors that if it detects a spill will be able to shut down the flow fairly quickly but with a flow rate of 4 gallons per minute this could still be quite a few gallons spilled on the dome floor. We conducted a test using 40 gallons of liquid nitrogen in a large insulated dewar. Spilled in what we considered to be the most dangerous location (inside the pier of the telescope on the dome floor). The liquid nitrogen quickly turned to cold vapor upon hitting the floor and we found that only the first 1-2 inches reached critical values while oxygen values at 1 meter above the floor stayed above warning values for the entire test. The test reassured the operations staff that the oxygen sensors do work and the risks are minimal except in the most contrived and unrealistic scenarios.

The big news for us this week is the lift of the wide field corrector to the top of the telescope. This involved removing the old test mass and the hexapods. The hexapods were serviced and put back on. The corrector was sealed up, rolled out of the clean tent into the dome floor and then lifted up to the top of the telescope. See the attached pictures. 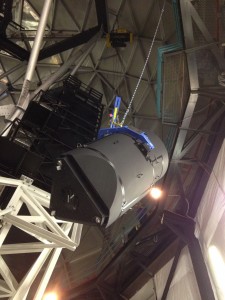 The lift of the Wide Field Corrector begins. The Corrector has its side plates mounted so no optics are visible. 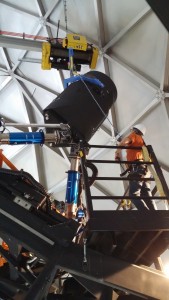 The corrector now at the top of the crane is lowered into the tracker. The blue and silver hexapods sticking up are only a small obstacle.

In addition the the installation of the corrector some work with the laster tracker was done and we determined the position of the base of the hexapods and see how much they may need to be shimmed to get into proper position for the corrector. At the same time we confirmed the distance to the CCAS instrument from the primary mirror and found it to be well within specifications for this corrector’s design focal distance.

Overall a great week with a major milestone passed. We now will start the PFIP installation as well as all of the plumbing and wiring connections to the new components.