Happy new year, folks!  It was a busy and wonderful Fall semester in the JETlab – it flew by, with many travel highlights along the way, some of which include: 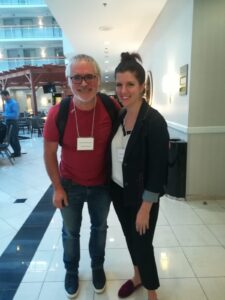 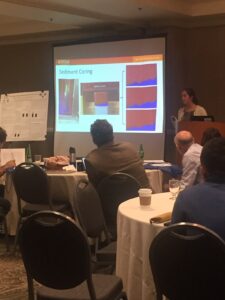 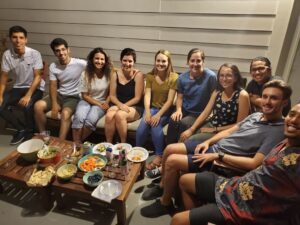 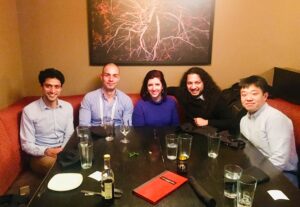 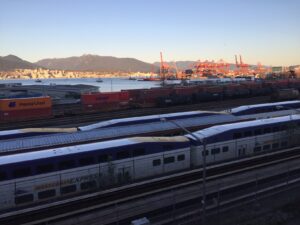 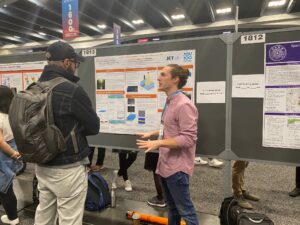 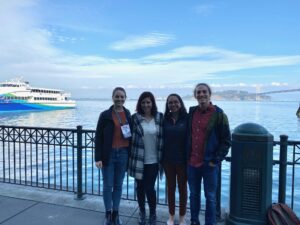 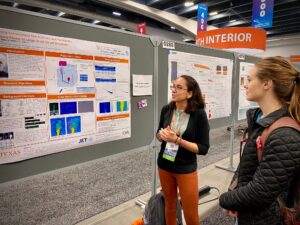 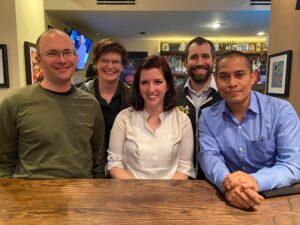 We also have two December graduates of EWRE from the JETlab.  Luisa Florez and Andrew Jaeger successfully completed their MS degrees, woot woot!!  Starting in January, Luisa will be working for BP in Houston, and Andrew will be the lead Engineer of the Coast Guard in Corpus Christi. I’m selfishly glad all my graduates have stayed in Texas so far, since it means I don’t have to say goodbye yet.  We don’t have a December ceremony, so … no graduation photos, sadly.

A few of us did a little hike at McKinney Falls State Park over winter break: 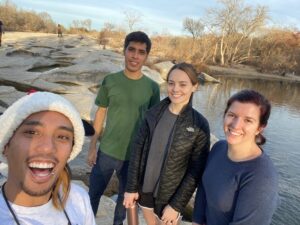 There were many other memorable moments in the lab – joyful, curious, disastrous, and hilarious.  I’m very thankful to my students, as always, for their positive attitudes, troubleshooting skills, and love of learning.

With the end of the semester, we have some exciting news and a few farewells! 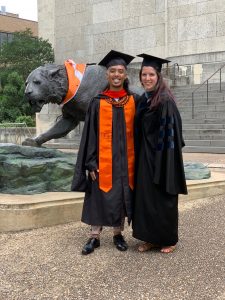 Many many congratulations to my very first Masters student, Junior Lagade, Jr., who submitted a lovely thesis and made my first year and a half as an assistant professor a true joy.  Junior will be staying in Austin to work as an environmental engineer, and I am hoping to finally attend one of his hip-hop dance classes.

Huge congratulations also to Yongsik Kim  for a fantastic Ph.D. defense and graduation!  Yongsik did a dam-good project (ha..) on pressure flushing and I hope we can still rendezvous on future travels.  Yongsik is working in South Korea and in charge of many dam projects throughout the country.  We sadly didn’t get a graduation day photo.

It has been a productive and fun semester in the lab, playing with liquid nitrogen, getting sugar pretty much everywhere, using intense black lights, watching tadpoles come out of the flume pumps, all sorts of joys that I’ll eventually update on the Research page.  We are making progress having more and more tanks in the lab and trying to plug the million leaks that go along with them.  Stay tuned to #flumefriday posts on Twitter for the good stuff.

Thanks for an excellent semester to my 2018 and 2019 JETlabbers!  (Yongsik we will photoshop you in from Korea one day!) 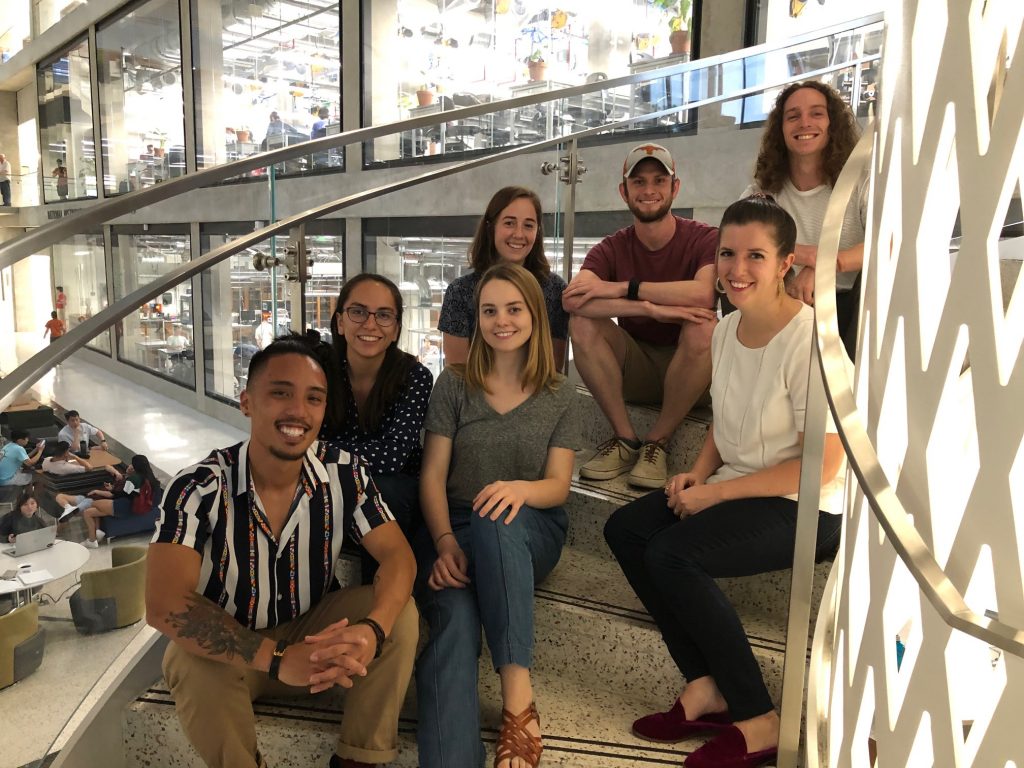 After many many hours of sledgehammering, drilling, shoveling, and carrying out tons of rocks, sand, rotten wood, and the works, the outdoor flume is back in action.  This is a very beautiful sight, thanks to the dedication and hard work of a crew of undergraduate civil engineering students (thanks to Kelly, Lorenzo, Marco, James, Sanjiv, and Jhoneil) and all my current JETlab students (Junior, Luisa, Greg, Andrew, Hannah, and Aubrey).  It looks brand new.

Thankfully we had some great 80+ degree weather in the middle of February to finish everything up.

One final before shot: 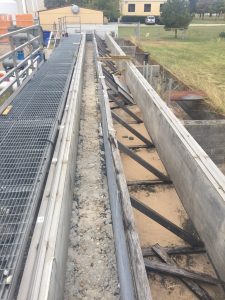 And some action shots: 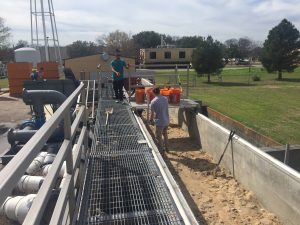 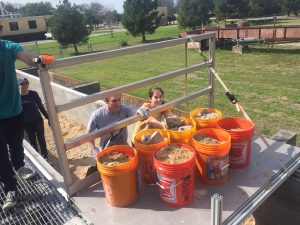 We’ll be putting some test median barriers in here in the next month or so — stay tuned! 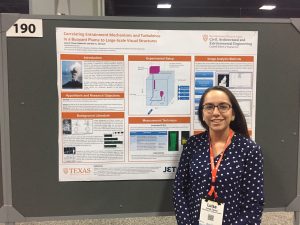 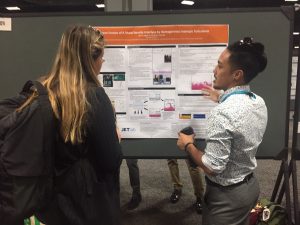 The semester kicks off tomorrow … 9:30am lecture for Elementary Fluid Mechanics!  But before we start, we have congrats in order for my first two Masters students on another conference well done. In December, Junior, Luisa, and I attended AGU 2018 in Washington, DC.  They each gave wonderful poster presentations on their Masters work, and I had a poster on some shock-tube results from my postdoc. 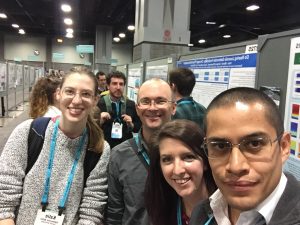 We also caught up with part of the Cowen EFMH crew from Cornell.  We have two current Ithacans, Katie and Seth, as well as one of my favorite Illinois professors, Rafael.  Always a joy to get part of the group back together!

My students have asked for a website update to reflect all of our collective progress the past few months.  Indeed there are near-daily improvements happening in the lab, so let’s celebrate some major milestones.  In no particular order:

Nearly overnight, we have grown from 3 students to 7.  Welcome to Hannah, Aubrey, Greg, and Andrew, profiles to be posted soon! 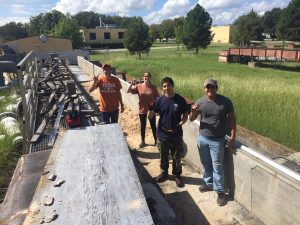 The outdoor flume (home of the TxDOT concrete median barrier project) is under renovations to remove old equipment and prepare it for our large scale tests.  I have wonderful undergraduate students who have been doing some intense sledgehammering. 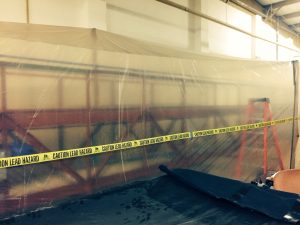 Our indoor flume from 1972 has seen a lot of work — lead paint is now dealt with and the cracked and damaged glass panels have been removed. 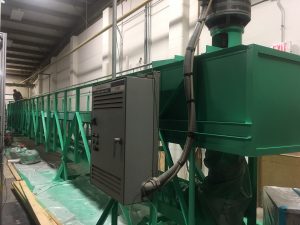 Windows have been cut through the steel base so we can shoot lasers up through the bottom, and … it has been painted green, because why not. It’s beautiful. In another week or  wo the new acrylic liners should be installed so we can maybe get water back in — fingers crossed!  It is remarkable. 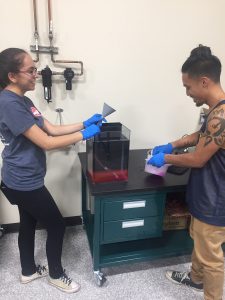 And finally, the actual “JET Lab” is built and already a mess, meaning – research is happening! Wires are being spliced, fishtanks are housing mini-experiments (while the big tanks are being manufactured), lasers and cameras and dyes and all sorts of goodies are arriving in the mail every day.  It is a beautiful lab and I have had an incredible amount of support from Facilities, the Cockrell School, my department and center, and the contractors who have come in to make this a reality.  And of course, my students, who are always willing to get their hands wet.  I am beyond thrilled. 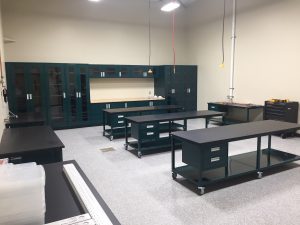 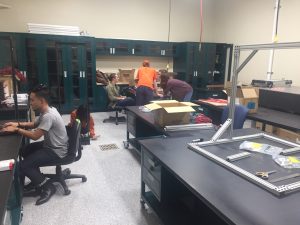 Summer is passing far too quickly, as always, but progress is being made one day at a time.  My lab is almost fully complete (and it’s really really beautiful!), flume renovations are in the works, money is being spent on lovely new tools and devices, and research is happening. I got to see old friends and make new ones at conferences in June – first at the 8th  International Symposium on Environmental Hydraulics at Notre Dame, and then at the Association for the Sciences of Limnology and Oceanography meeting in Victoria, BC.  Next up will be the AGU Fall Meeting, once we have new experimental data!

In mid-June, I found out that my first real proposal was awarded, and so come spring 2019, we’ll be testing concrete median barriers. Woohoo!!  Wait, concrete median barriers and environmental fluid mechanics?  Why?  Well, during and after Hurricane Harvey in August 2017, there was heavy rain (an understatement) and terrible flooding.  There were areas where the concrete median barriers, which normally serve for crash protection between lanes of oncoming traffic, instead acted as dams and prevented floodwaters from draining across the highway.  There are phenomenal photos (I have no public ones from Texas, but here’s a photo/article of a similar event in Louisiana) where you can see half of the highway completely flooded up to the height of the barrier, while the other half is dry and open to traffic.  We are partnering with the Texas A&M Transportation Institute to design median barriers with holes in them, so the water can pass through efficiently and improve flood conditions (this is the hydraulics part!).  They still have to be structurally sound and crash proof, so once we develop a barrier capable of handling flood conditions, we also get to crash giant trucks into them and see how they hold up.  How cool is that.  No Navier-Stokes equations will be endangered during this process, but … it’ll be pretty awesome if we make something that works that then ends up on actual Texas highways.  Fingers crossed!

When I was considering my offer for UT last year, I forgot to really ask for a flume.  It seemed so natural – fluid mechanics professors should have flumes – that it didn’t even cross my mind.  I think I was so excited by the giant outdoor flume that I was satisfied anyway.  But luckily, the department realized – we already have a tilting glass research flume.  It was built in 1972 and hasn’t really been “run” as a flume in a decade or two (or more…), though it has had water in it since then, leaking like a sieve each time.  There were plastic chairs sitting in it, chipping paint, rust, drip marks, etc.  But seeing good bones on it, I couldn’t let it go to waste and have been plotting ways to bring it back to life over the past year. 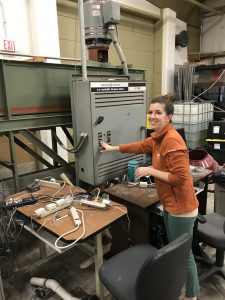 Last week, my students Junior and Luisa set to work cleaning it and working with Jim Buttles of the Jackson School to see if we could get it to working order.  Electronics were inspected and repaired, and supposedly it would all work.  Yesterday was long-anticipated “flume day” where we planned to put water in it and run the pump, cross our fingers, toes, and everything possible, and … it ran!  They did all the work but let me push the button, which I was pretty pumped about, no pun intended. 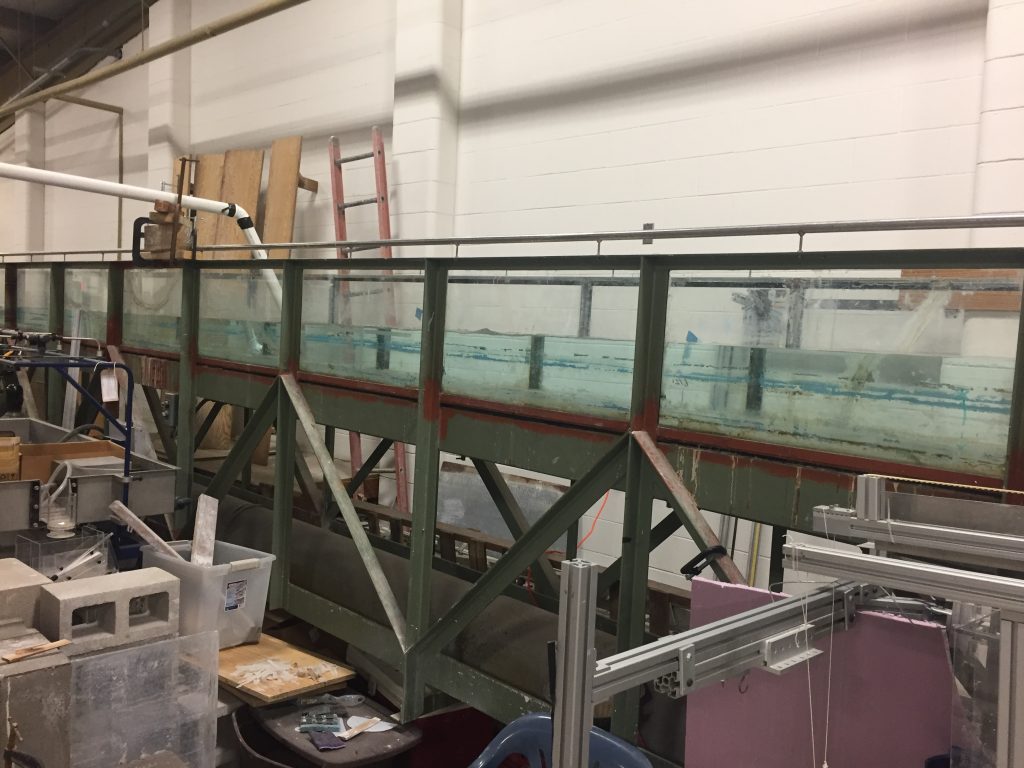 Though we filled it with clean water, leftover mud was sitting in the recirculation pipe, so we had an impressively cloudy hydraulic jump (not really shown here, but you can imagine).  It smelled incredibly earthy, also a little like fire (46 year old dust needs to get brushed out of the control box!) but it worked and the water was rolling. 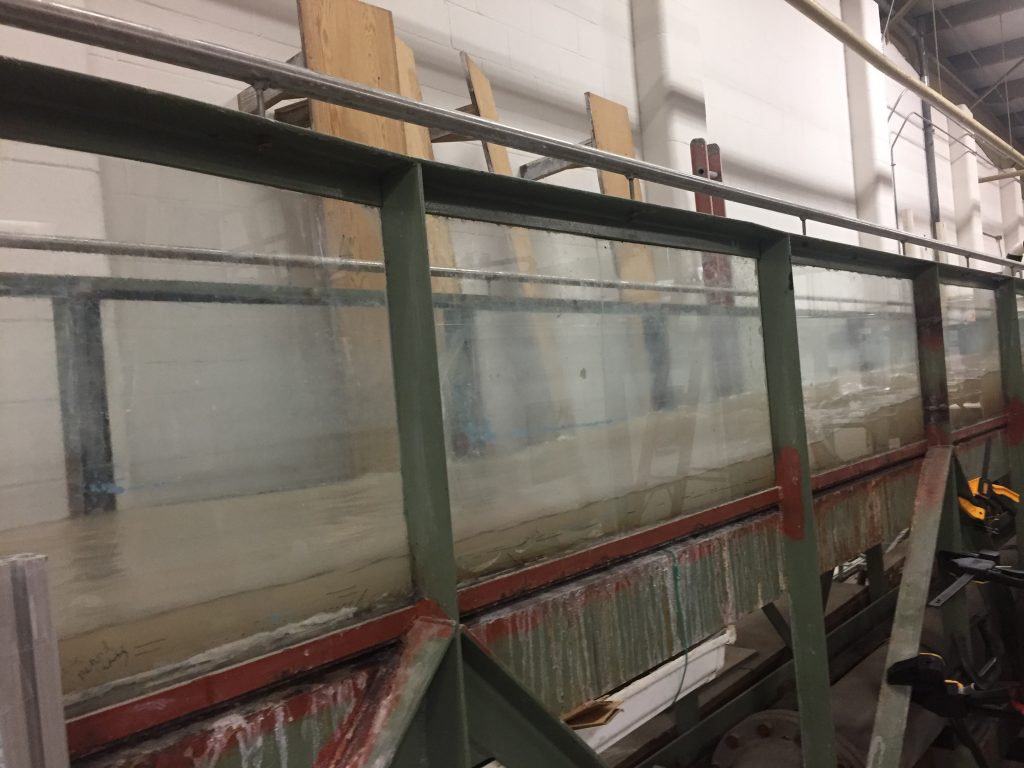 There’s still a lot of cleaning to do, updating the panels for full optical access, investigating the tilting mechanism, and beautifying the paint job a bit, but I remain optimistic!  Now we just need a name…

Since the lab now has water, it is almost a real fluid mechanics laboratory.  Check out a couple pictures of its evolution… 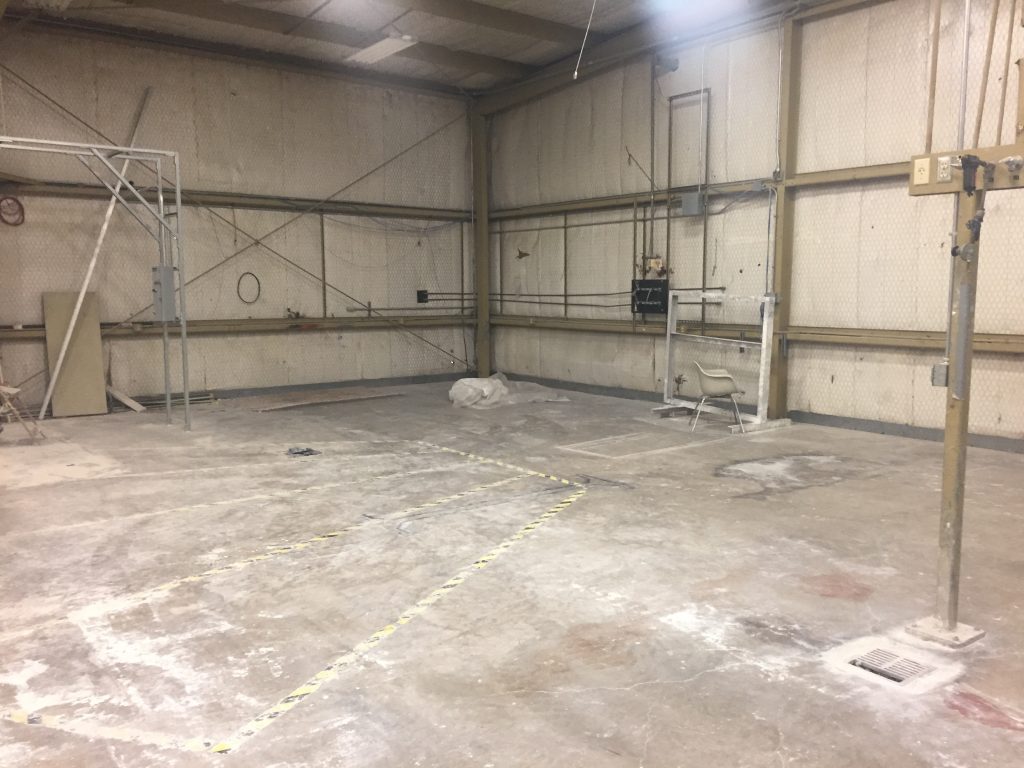 Slightly less “before,” as of January 2018, complete with finished/insulated walls, a sink, an emergency shower and eyewash (which works — we tried!) and the base for a fume hood – 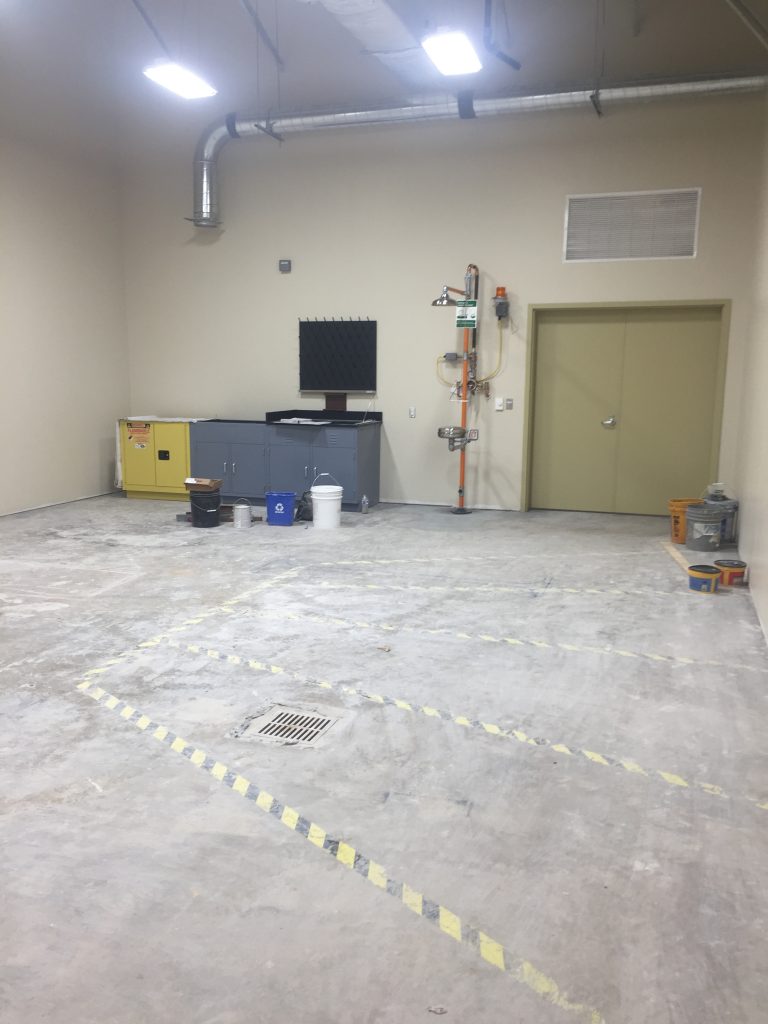 And finally, current photo as of March 2018, now with water along the walls, drop-down electrical outlets from the ceiling, ceiling insulation (gotta keep in the AC!) and waterproof floors – 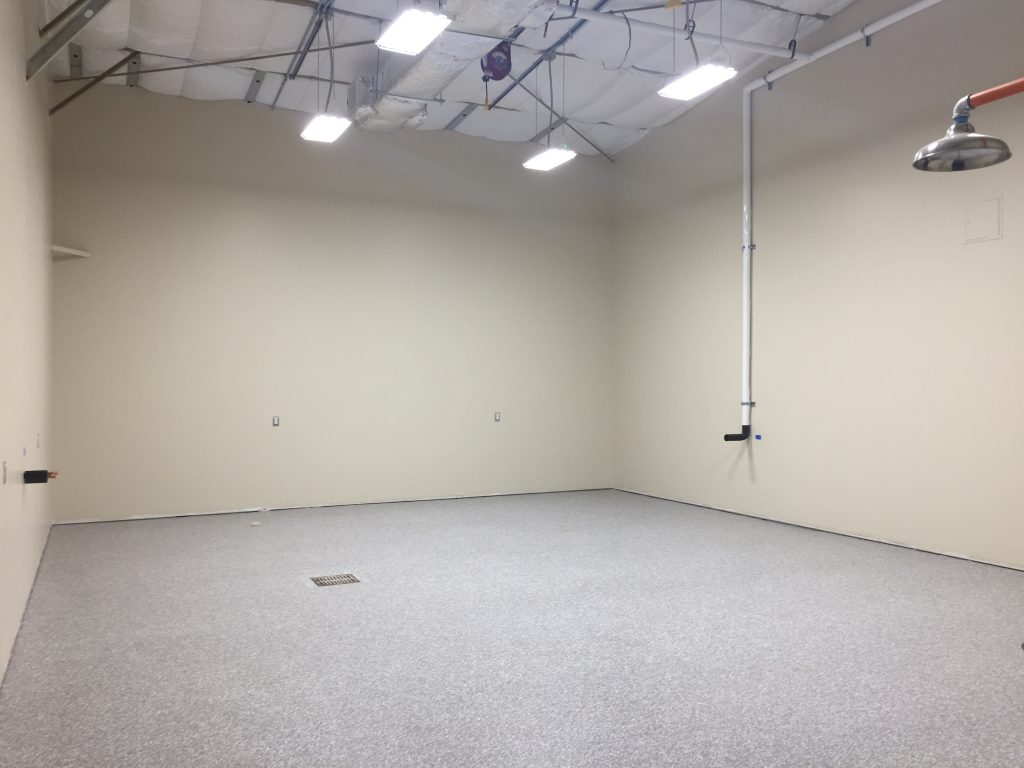 Coming improvements include furniture, laser warning lights, and all the fixings to explore what science wants us to learn.  Stay tuned!

Renovations of the Johnson Environmental Turbulence (JET) Laboratory are presently underway with the lab opening in January 2018 when Prof. Johnson will arrive as an Assistant Professor in Civil, Architectural and Environmental Engineering at the University of Texas at Austin.  In the lab, we will break down complex environmental flows into their fundamental components to understand the driving fluid mechanics processes responsible for mixing and transport in the environment.  Even while living several hours from the coast, we can study phenomena such as breaking waves, stratified flows (whether by salinity, temperature, or some other density gradient), fluid-structure interaction, sediment transport, and countless others by developing unique laboratory facilities.  There will often be an emphasis on exploring turbulence as a key energetic contribution to shear stress, erosion, diffusion, and other processes.

While we are building new experimental facilities and renovating old ones, there will also be the potential for field work in Texas and across the US.  Although the primary expertise of the JET lab is experimentally-based, opportunities exist to collaborate with numerical modelers or to pursue joint experimental/numerical graduate research within the UT community and at other universities.

Please excuse (or enjoy!) the photos and videos of longhorns that are presently scattered around the site as updates are made.