Almost half of our alumni find careers in the nonprofit world. But only a small fraction — less than five percent — take management positions. We asked four alumni who currently occupy these positions how did they get there, why they are in their line of work, and what added value they bring to the table as social workers. 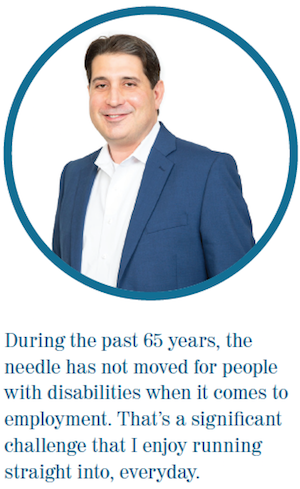 WHERE: NW Works (Winchester, Virginia), an organization that expands employment opportunities for people with disabilities in the tri-state area of Virginia, West Virginia and Maryland.

WHAT: President and chief executive officer

HOW: Henson always knew he was committed to service but a degree in social work helped him professionalize the desire to help others. After graduating, he spent two years in Malawi with the Peace Corps, and upon return he moved to the Washington, D.C. metro region and began working in services for individuals with disabilities. He saw that employment was the key sustainability factor to help these individuals live productive, meaningful lives. He wanted to translate his successes in metropolitan D.C. to a tight-knit community that looked more like the rest of the United States. He is happy to have been doing exactly that at NW Works since he joined in 2016.

WHY: Henson realized that when individuals struggle with employment, there is often an underlying cause related to a disability that may have not been uncovered. He knows by experience that when these individuals are matched with the right resources, they can thrive and contribute to the local economy. From his perspective, disability is one of the key factors to target when trying to break the cycle of multi-generational poverty, an issue he is passionate about. He is excited about taking NW Works’ decades of institutional experience in working with people with disabilities and apply them to help solve the issue of multi-generational poverty.

ADDED VALUE: His social work education — which Henson warmly refers to as “diplomacy 101” — has allowed him to build strong teams during his career in the nonprofit world as well as navigate difficult situations with clients, employees and those involved in policy-making. 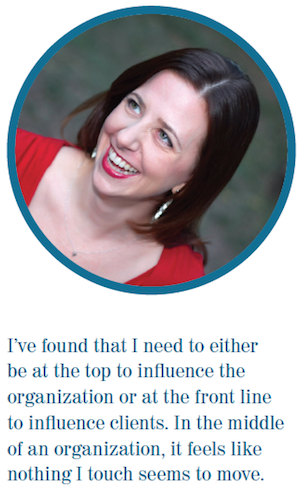 WHERE: Austin Recovery (Austin, Texas), a nonprofit substance-abuse treatment center that offers residential and outpatient options to all in need.

HOW: Sovine wanted to be a therapist, but while in the social work program a family member was sent to prison, and this sparked her interest in criminal justice. She graduated wanting to reform the Texas criminal justice system, and got her first executive director position in 2006 with a small nonprofit focused on prison re-entry. In 2016, after Austin Recovery went through a major re-structuring, she joined as director of operations and eventually became executive director. She credits social work professors David Springer and Darlene Grant with seeing the leader in her while she was in school. Leadership has now become part of her identity as a social worker, and she says she is “unabashedly nerdy” about it.

WHY: Sovine enjoys being able to set culture and policy in order to create a healthy organization where people like to work. She loves developing people, seeing them grow and find their passion and their niche. With Austin Recovery specifically, she enjoyed the challenge of helping put the organization back together after a crisis. By working to make addiction treatment accessible to marginalized populations, she feels that she has come full circle to her original goal of helping reduce incarceration.

ADDED VALUE: Social work values are a key component of Sovine’s leadership style. She consistently uses her professional use of self and ethical decision-making frameworks; she is able to look at systems, and also at the the people who work in those systems as human beings with strengths. Thanks to her social work training, she can move easily between micro and macro levels, and is able to create authentic relationships and bringing people along, which she does both with staff and board members. 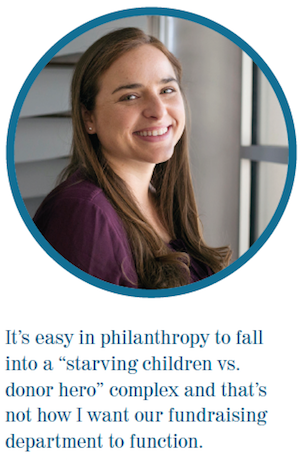 WHERE: Central Texas Food Bank (Austin, Texas), a nonprofit with the mission of nourishing hungry people and leading the community in the fight against hunger.

WHAT: Director of Development

HOW: Peña got her first nonprofit job when she was in high school, working at the Habitat for Humanity resale store in her native Texas town. During the master’s program, she chose the administration and policy track and completed the portfolio program in Nonprofit Studies through the RGK Center for Philanthropy and Community Service. She knew fundraising was her calling — as opposed to program development — when she heard a development director in one of her classes describe the work and how she interacted with clients to convey their stories to donors.

WHY: Peña loves connecting people with causes they care about. Plus, fundraising is a practical career choice. Raising money is a very specific, transferable skill always needed in the nonprofit world. More personally, she is very data-driven and results-oriented, and with fundraising she can always know when things are working.

ADDED VALUE: Peña has subtly worked to encourage person-centered language across her organization — for instance, switching from “hungry people” to “people experiencing hunger”. She reads every written piece, from grants to reports, asking herself, “If a client reads this, would they be embarrassed about the way we portray them?” She wants to share authentic client voices with donors, and make sure that clients are an integral part of coming up with solutions at her organization. Thanks to her social work skills, she builds rapport quickly with donors and adapts to other people’s communication styles in and outside of the organization. 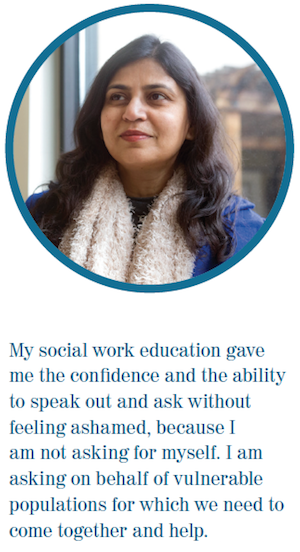 WHAT: Founder and president of the board

HOW: Saxena had been working as an IT engineer for 20 years when her mother-in-law developed dementia. She became her mother-in-law’s primary caregiver and realized it was hard to find the right resources, services, and supports. She started SAIVA as a volunteer association where people like her mother-in-law could come together with others and volunteer, thus developing connections in their lives — research shows that connections and movement are very important to prevent and delay dementia symptoms. In 2012 SAIVA became its own nonprofit and Saxena was dedicated full time to it. She felt she needed new skills for this career turn, and decided to go back to school. She found the portfolio programs in Nonprofit Studies and in Aging and Health at the UT Austin to be a very good fit for the skills she wanted to acquire.

WHY: Simply put, Saxena found her passion. She went through an existential process with many changes, and made the decision that she wanted to spend her life in service to others. She feels she has been blessed with many opportunities, and wants to make sure these opportunities are available to others too. In Marathi, her native language, and in the original Sanskrit, the word “seva,” which is very close to “saiva,” means “service.” That is the focus of the organization she started. It is an ongoing process to figure out what are the services that make more sense for the community she wants to serve.

ADDED VALUE: Social work education gave Saxena a deeper understanding of and great connections in the Central Texas nonprofit world. She also learned how to advocate, a skill that she uses very intensely. Growing up in India, she was not aware of advocacy as a distinct form of politics and was unfamiliar with the practice of seeking legislators out and talking to them.