When AMY THOMPSON was an undergrad in international studies, her Spanish professor assigned a news article from the Texas-Mexico border on the detention of migrant children in U.S. federal prisons. After reading that many unaccompanied children were detained indefinitely alongside criminal adults, she realized that her work in children’s advocacy would be back home in Texas, and not abroad. Amy is now a doctoral student at the Steve Hicks School of Social Work. For her dissertation, she recently conducted field work in Mexico, where she interviewed children recently deported from the United States. 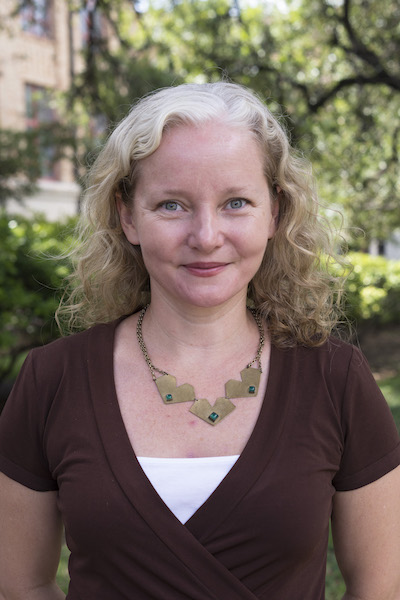 WHY DO YOU FOCUS ON MEXICAN CHILDREN? Unaccompanied children from Mexico are uniquely vulnerable at the U.S. border because they are immediately returned to the nearest port of entry. Unlike children from, for instance, Central American countries such as Guatemala or El Salvador, children from Mexico are not screened to determine whether they have a credible fear of return, and they have no access to immigration courts or protective services. On the Mexican side of the border, they end up in shelters that are frequented by cartels looking for new recruits or targets.

The vast majority of unaccompanied children from Mexico are returned in this manner. The assumption is that they are not seeking asylum and not in need of protection. However, with the increase of violence related to organized crime across Mexico, especially along the border where the kids are returned to, this assumption endangers children.

WHAT CAN SOCIAL WORKERS DO ABOUT THIS? Social workers can seek out opportunities to work across borders — both geographic and disciplinary. Because of increased security on the U.S.-Mexico border and decreased investment in social services, social workers on both sides of the border are stretched very thin and have limited information about each other’s systems, which differ greatly in structure and capacity. When a child is returned to Mexico, a network of knowledgeable professionals on both sides is essential for any hope of providing continuous care for that child.

One opportunity to build cross-border collaborations is the annual Binational Conference for Social Work between Mexico and the United States. The next one, hosted by the School of Social Work and Human Development at the Autonomous University of Nuevo Leon, will take place in Monterrey, Mexico on November 29-30 (learn more at tiny.cc/binational-conference).

Social workers can also seek transdisciplinary partnerships with immigration attorneys, who can provide access to the relatively few children from Mexico who make it into detention facilities across the United States. Social workers may serve as subject-matter experts in immigration cases that consider the child’s vulnerabilities or as service providers for child clients in need of assessment or counseling. Detained children from all over the world, actually, can benefit from social-work services and from social work’s leadership on standards of care for children in the custody of immigration enforcement.

WHAT ARE THE MAIN CHALLENGES IN SERVING OR ADVOCATING FOR MIGRANT CHILDREN? For me, the greatest challenge is having patience in the face of sympathy fatigue and societal indifference to the plight of unaccompanied children. I understand that secondary stress can be an issue for some colleagues. In both cases, I think the answer is having a sustainable approach to self-care.

Despite, or perhaps in the face of, increased reference to migrant children in political debates, I do not anticipate any top-down reforms in the near future. It will be up to individual social workers and professional networks to advance practice from the ground up and advocate for increasing the application of child welfare norms to the treatment of all children in the custody of immigration agencies.